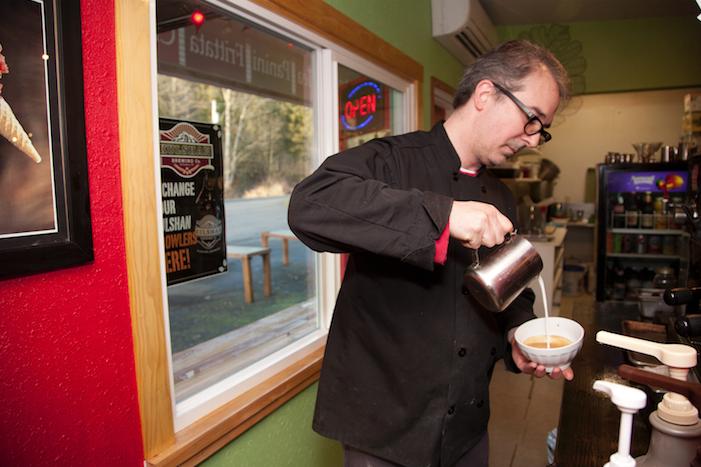 A cup of joe, and gelato to go

Story and photo by Brandy Shreve

At Il Caffe Rifugio the walls are tumbling down, and owner Richard Balogh is finally seeing his dream of a walk-up coffee and gelato bar on Mount Baker
Highway come true.
“The coffee has always been here, but the gelato has taken some time to figure out,” he said. “My dream was to have one of those long, curving coolers like they had in Italy, but I didn’t have that kind of money or space. So instead I pulled down the front wall of the restaurant to get a standard cooler in, and built my own counters to get what I wanted.”
He then replaced the wall and created a walk-up window to make it easy for passersby to stop and grab a cup of joe or a scoop of gelato on the way home from a busy ski day.
Balogh said he chose to serve gelato simply because of its freshness. “It’s delicious. Everything about it is fresh,” he said. “I’ve had to wait on it so that I could find the right distributor, because I wanted to make sure we were serving a gelato that uses fresh ingredients, which is becoming more and more rare.”
Along with the new walk-up window and sweet offerings, Balogh is also freshening up the menu to keep in line with his vision for the mountainside cafe, which is a full-service Italian restaurant serving breakfast, lunch, dinner, pizza, espresso and desserts.
“The original concept of the cafe was for us to serve panini, gelato and high-end coffee and desserts,” Balogh said. “But everyone kept asking for things like biscuits and gravy, eggs and sausage. Out of stubbornness, I’ve continued to make the things I want.”
Balogh is excited about the changes to the intimate cafe space, including the fact that they are now a little more green after having replaced all the heaters throughout the restaurant.
“The next phase is working on the exterior of the cafe,” Balogh said. “We are going to make it look really nice.”
The cafe, located at 5415 Mount Baker Highway in Deming serves espresso roasted by Cafe d’Arte and is open 8 a.m. to 8 p.m. Thursday through Sunday.   x