With icefalls cascading down her northern flanks and a summit pyramid towering over a plateau of ice, Mt. Shuksan’s complicated form transfixes everyone who sees her up close for the first time. First time ski area visitors sometimes assume that Mt. Shuksan is actually Mt. Baker, because why on earth wouldn’t you name the ski area after that mountain?

Shuksan gives an immediate impression of ferocity, steepness and danger. Climbers looking at the mountain for the first time often wonder if there is a safe route to the top (I know I did). And in winter? Avalanches and spindrift course down Shuksan’s flanks and the mountain can be locked in storm for weeks at a time. No thanks!

But familiarity has a way of expanding the realm of possibility. I first climbed Shuksan in summer 1999 via the Fisher Chimneys route above Lake Ann and have returned every few years, sometimes to a different route and sometimes on my splitboard to speed the way in and out. Fast forward 14 years and I’d climbed Shuksan several times, spending many winter days around her flanks. A winter ascent no longer seemed crazy.

familiarity has a way of expanding the realm of possibility.

Winter climbing in the Cascades is a waiting game. The windows of good climbing conditions and, most importantly, safe avalanche conditions, are rare. What exactly does a “window” look like? That varies by the climber and the particular route, but for our team (Kit, Gord, Chad and myself) it meant at least three days of clear weather and a Northwest Avalanche Center forecast for “low” or “moderate” danger at all elevations.

With daylight scarce, we planned a two-day climb to Mt. Shuksan that left an extra day before the next storm in case of injury or other mishaps. Some years there isn’t much of a window at all, at least not one that aligns with home and work calendars.

In mid-January, it all aligned for us. Chad was visiting from southeast Idaho and we wanted to show him that the Tetons weren’t all that great – not compared to the North Cascades. We handled the logistics and gear, leaving Chad blissfully unaware of what he was getting into until we all piled out of the car at the White Salmon lot, pointing to our objective, bathed in morning light and towering 7,700 feet above the north fork of the Nooksack River. I’m pretty sure Chad gulped, but he didn’t show it.

We left the White Salmon base area (altitude about 3,600 feet) on a descending traverse towards the head of the White Salmon valley. As the morning wore on we labored up towards White Salmon Glacier, hurrying though the danger zone below Hanging Glacier. We nervously eyed tracks left by blocks of ice that had fallen thousands of feet from Hanging Glacier into the valley, hoping that the next salvo didn’t run any farther down.

On the way out of the ski area we had run into Daniel Helmstadter, a Cascades legend with many first descents to his credit. Now we could see him far above us, expertly weaving a path up the glacier. Following his track made our job of avoiding crevasses on the glacier a lot easier; from then on, we fell into a rhythm, taking breaks occasionally to marvel at the view, the weather and our luck at the stable snowpack.

About five hours after leaving the car we popped into the sun on the gloriously flat ridge atop White Salmon Glacier (about 6,700 feet), which would be our home for the night. Here we settled into the winter routine of melting snow for water, stomping our feet to stay warm and wishing the sun would stay above the horizon just a little longer.

In the morning, we were reluctant to leave our sleeping bags until the sun came up. With little time to waste, we left our overnight gear and started the ascent by skinning up and across the Upper Curtis Glacier, where ski crampons were useful, and then taking our skis off to boot through Hell’s Highway.

We reached the mellow slopes of Sulphide Glacier 1,000 feet above camp and followed it to the summit gully. Daniel had kicked great steps the day before that made it easier for our team to ascend the icy 45-degree snow slope to the very top. Unlike Daniel, we left our skis at the base. We ended up belaying a short bit from the gully to the summit ridge, where the angle and exposure increases significantly for the final few feet to the rime encrusted summit rocks.

From the summit, ridge upon ridge of jagged peaks plastered in snow and ice stretch out north, east, and south; to the west, more than a vertical mile below, lay the ski area parking lot and the bustle of a busy day on the hill. The Idahoan was suitably impressed. 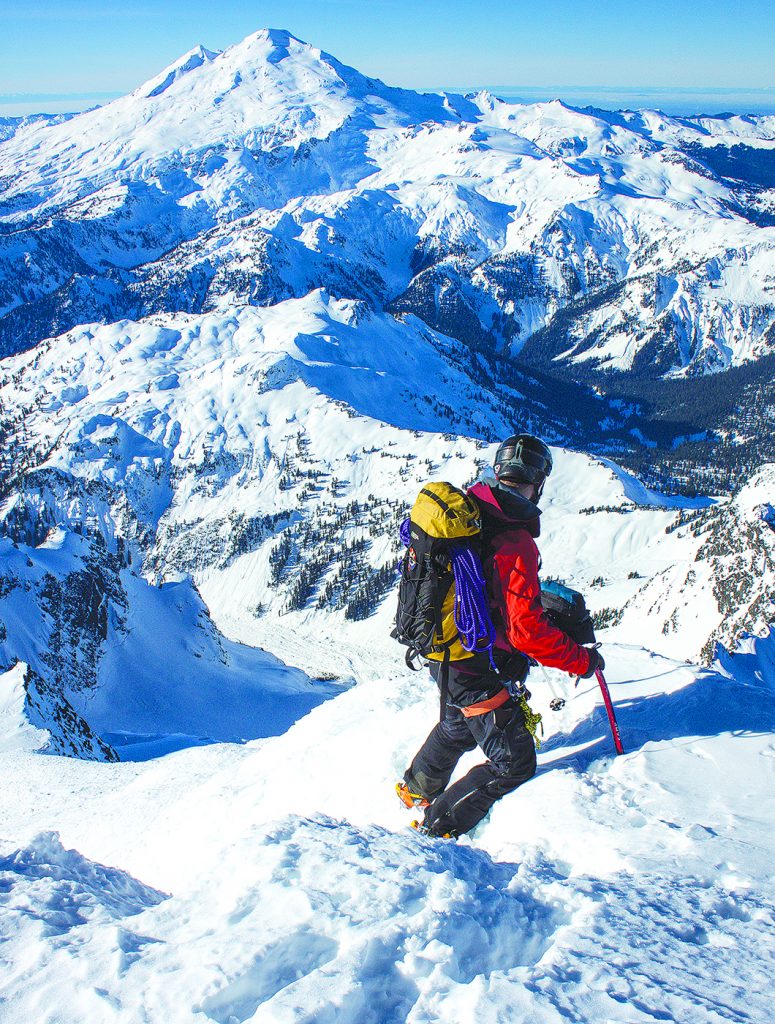 We had the summit to ourselves, naturally, but couldn’t stay long. We down-climbed the summit gully and returned to our skis. Instead of exactly retracing our route from the morning, we kept heading counterclockwise around the summit pyramid, traversing the upper slopes of Crystal Glacier until we could complete a short climb to the top of Hanging Glacier where we stripped skins for the fast ski back to camp.

After packing camp, we faced an unpleasant ski down the firm White Salmon Glacier with full packs. Great climbing throughout poor ski conditions was a theme on the trip. Unfortunately, that’s typical on the large peaks of the North Cascades, where safe winter climbing conditions often mean bad skiing. But the outrageous positions and views along the way more than made up for it. On the final climb back to the car at dusk, I thought about future winter climbing objectives. I realized I’d never climbed Mt. Baker in winter.