Story and photos by Andy Basabe

I laid my book on the downy red ripples of Jerry’s sleeping bag and rolled on top of him to get to the nozzle of my leaking pad. Squinting in the bright Alaska night, I pushed my breath into the pad, growing dizzier with each breath of air at 14,000 feet on Denali. I hadn’t seen stars or darkness in 15 days and I wouldn’t for another 10. The evening radio forecast called for -20 degrees Fahrenheit. I removed myself from Jerry’s sleeping space, which was also my table and chair during the day.

When we were in the tent, we had to care for each other, as there wasn’t room for each of us to do so separately. We had one toothpaste tube between us and Jerry would need my sunscreen in the mornings when he forgot to tuck his in his sleeping bag to thaw overnight. I secured some toilet paper from a group heading down. I set one aside in the tent, knowing Jerry’s roll was almost done. He lit the stove and melted snow every evening, and I dumped our pee bottles outside every night so we could continue to pee in the comfort of our sleeping bags.

As a home, Denali is a particularly exacting place to live. Sunlight is the only kindness and clouds are frequent. Each new camp meant destroying and rebuilding our homes, digging walls, foundations, stairs, kitchens and bathrooms. We were told that guiding clients on Denali is simply taking people where they don’t belong and managing them so they don’t hurt themselves or anyone else. Lucas DeBari, our unofficial head honcho, told us exactly where we did belong and what we should be doing while we were there.

After chores, we were free to enjoy the mountain. There were over 100 people at basecamp at 14,000 feet, and they all walked the same path up and down the mountain preparing to go to higher camps. We strayed from the path and painted the rest of the mountain with tracks, reminding everyone that there is more to an expedition than going home as soon as possible. As much as this trip was a snowboard expedition, it was also a vacation. We didn’t set any speed records, nor did everyone summit, but we did it our own way. 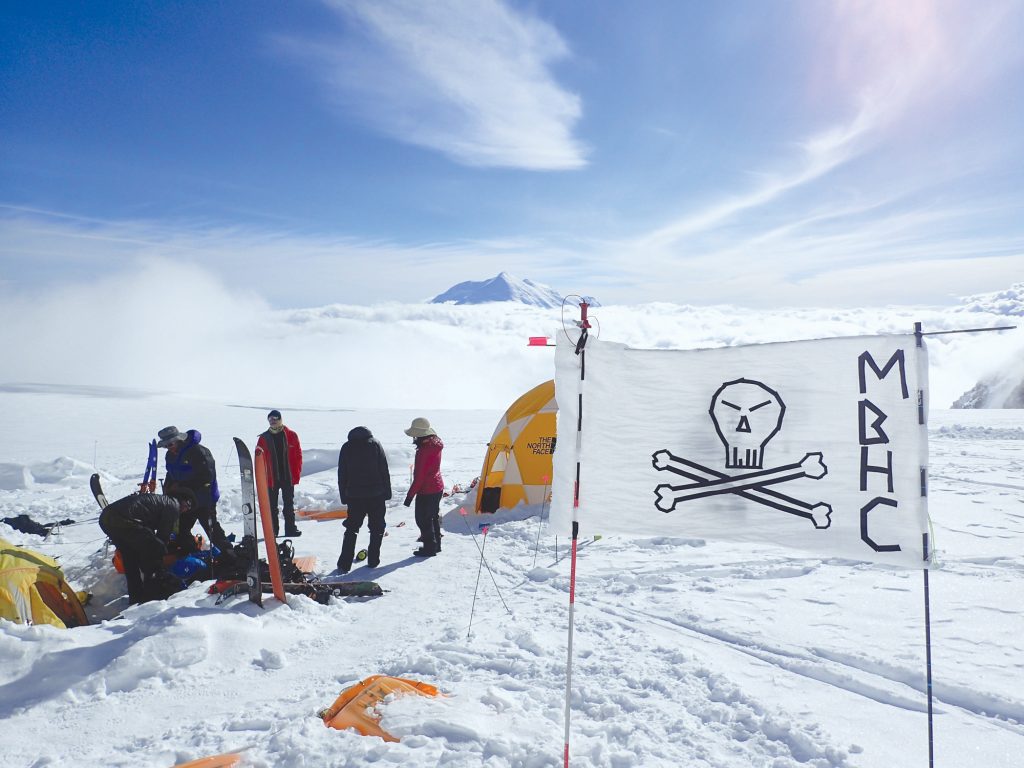 The Mt. Baker Hard Core (we needed a team name for the climbing permit) was a testament to friendship and fun. Mt. Baker locals Lucas and Maria DeBari, and Olympic halfpipe gold medalist Kaitlyn Farrington frequently travel across the world to snowboard for The North Face. This time they were foregoing the budgets and obligations to find satisfaction not in accomplishment, but companionship. Story talk after dinner was made more interesting by the diversity of our jobs and interests – engineering, teaching, stream science, bartending, pizza, trail building – and most importantly by growing up together.

At basecamp we erected a bright orange dome canopy and dug down in the snow to build benches, counters, a stove and some nooks for our mealtime trinkets. It was the biggest tent in camp. The kitchen was the place to hang out. Rumor spread through camp that we had a private chef. Since we went snowboarding on sunny days instead of pushing higher, people began to ask if we were making a ski movie. No ski movie, no chef, just friends on an adventure. Every evening and some mornings, a select group of guides, rangers, climbers and outdoor company CEOs would come visit for a spell and people began to ask if we had a bong. The first one broke, but we built a new one and they all came back.

Our goal, other than fun, was to snowboard from the top of the mountain. Lucas and Maria, along with their mother Jeannie, had attempted to summit two years prior, but Maria got pneumonia and had to descend from basecamp. Giving her another shot was a big motivator for the trip.

After acclimating, the Mt. Baker Hard Core crew moved up to 17,000 feet under sunny skies. With snowboards on our backs, we climbed steep snow, crossing a mile of rock and ice ridgeline, sometimes walking on the crest with nothing on either side but gravity. We hoped to summit the next day.

We awoke to clouds and wind, with a forecast of 50-plus-mile-an-hour wind on the summit, so no go. Higher than most of us had ever been, we poked our heads out of the tent to take in the most extreme and beautiful campsite in America.

Our neighbors told us the weather would improve, so we waited out the wind, leaving the tent during intermittent calms to ask for extra food from other climbers. We had only brought enough for one extra day.

The next day was just as hopeless but we stashed some food and gear for a return trip before we worked our way back down to a more hospitable camp at 14,000 feet.

On the way, I swung my hands to bring blood to my fingers, jumping and kicking to keep feeling in my toes. The demands of the descent prevented me from moving fast enough to stay warm and I had to tell my body it only needed to function for a few more hours, then I could get in my sleeping bag. The wind and snow bit though my sunglasses and hood. It’s strange that if there is nothing else to be done, telling yourself you’re fine is enough.

A week later, we found ourselves back at high camp with more food. We embarked for the summit in the morning under a clear sky. The first steep face requires teams to move from picket to picket, attaching the rope to each one as they pass. After this, we moved over rolling hills, passing guided groups to the base of the summit. All 10 of us were together, 500 feet below the summit of North America. At this point, Maria’s face began to turn purple and she couldn’t speak clearly, so she and Lucas turned back and the eight of us continued.

As we slogged up the last incline, I was energized by how close we were to the culmination of a month’s effort. We were beset by guided groups while stepping across the summit ridge and had to work not to endanger ourselves in their wayward ropes. With the end in sight we watched the clouds move in, enshrouding the uppermost 200 feet of Denali. We could see each other, and the USGS marker denoting the highest point on the continent – nothing else.

Snow really sucks at 20,000 feet. The frozen Styrofoam that crumbled underfoot was too dense to slide on. I didn’t even bring my snowboard on summit day. Those who did snowboard resorted to ice-axe, sit-down shenanigans while the rest opted to carry their boards all the way down. As usual, it turned out the reason we were on top of the mountain was much less important than the people we climbed it with.

Maria was feeling better, happy that she had gotten close enough to the top to see it, and the rest of us were just tired. We slept and then moved back down to basecamp the next day. Unlike most parties who head down to the airstrip as soon as they can after summiting, we opted to savor the sunshine.

We had whiskey to drink, backflips to do and seracs to jump. But cheeseburgers, pizza, beer and significant others began to dominate conversations after a few days of leisure, so after 25 days on the mountain, we decided to head down.

On the way up, we had spent eight days shuttling loads on our backs and our sleds, lugging 1,500 pounds of gear from 7,000 to 14,000 feet. It took us six hours to retrace those steps that final night. We loaded our sleeping bags and jackets into backpacks, and put all the heavy things on the sleds and leashed them to our harnesses. I pointed my snowboard down the longest hill I’ve ever seen. It was memorable, but not quite what I hoped for.

I fell down a lot. If the slope was steep, the sled would slide in front of me, but when the terrain mellowed, it was like playing catch me if you can with a warthog. I would slide in front, trying to keep slack, but if I went too fast I would jerk the sled forward into the back of my knees. On corners, it would ragdoll, ripping me off my feet as soon as the cord went taut.

Whenever I stopped too quickly, the sled would fly past and jerk me to my face, down again. If I went just slow enough I could guide the sled down with my hands and feet, letting my eyes rise to the amphitheater around me, lit by the longest sunset of my life. Around each bend was a new glow – glaciers unfolded for miles, sinuous bands of crevasse-speckled white.

To take my mind off my throbbing toes, I replayed the events of the previous month: Kaitlyn college-girl dancing to nasty music in bad weather, clouds lapping the edge of Denali with Mount Foraker interrupting the horizon like an Arctic island, waking to helicopters drowning everything in noise as they came to pick up fallen climbers, my newfound distaste for oatmeal, the people we met and the food and stories shared by all those who make Earth’s higher altitudes their home.

I found some satisfaction in dropping my backpack, untying my sled and having to go up no more. We laid out our sleeping bags together, no longer needing a tent’s walls to keep us close. The plane would come in the morning. 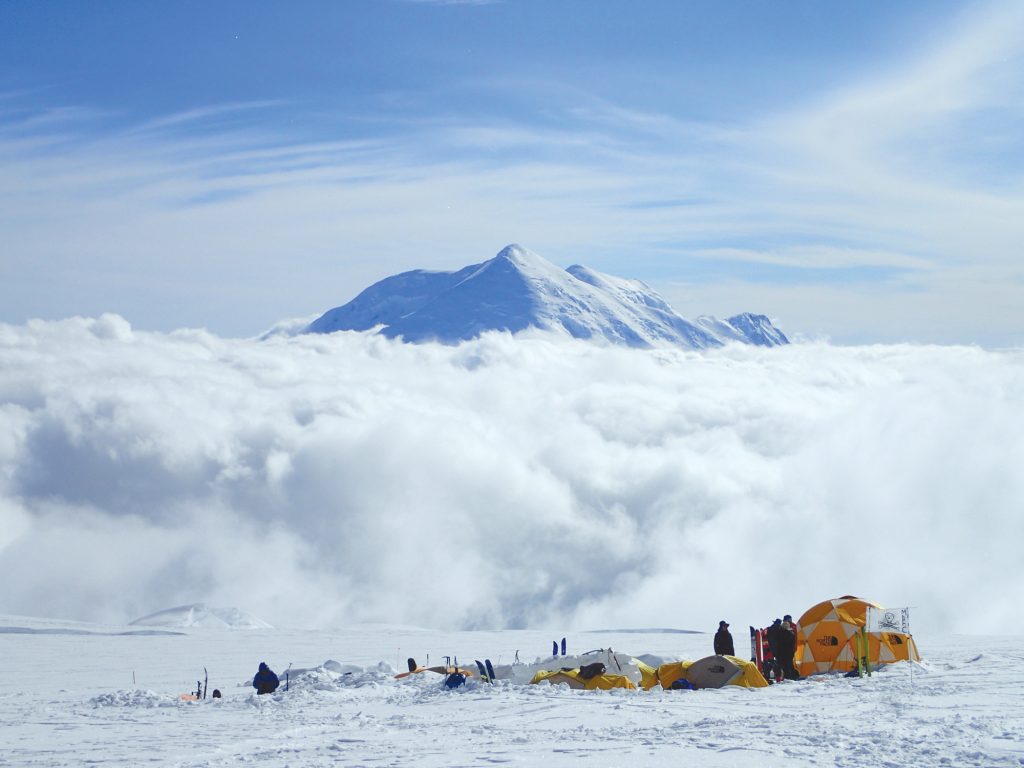 Andy Basabe is an educator in Whatcom County. Some of his days are best for words, others for walking. Everyday for eating.

Ski to Sea canceled for second year in a row