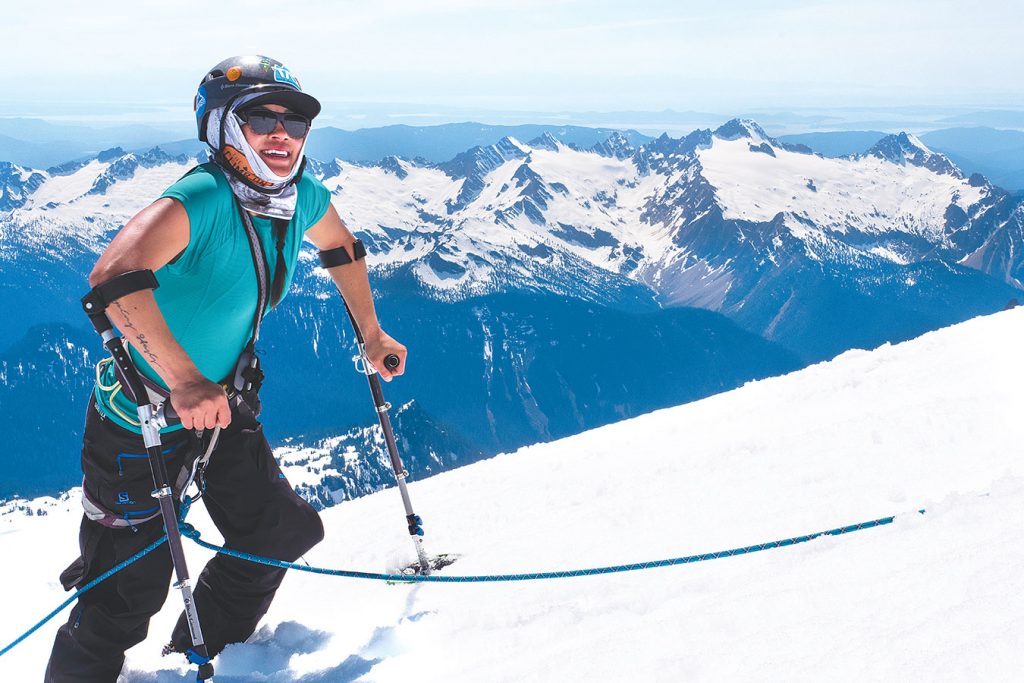 With a sea of peaks to the east and saltwater to the west, Anna Soens sits above Mt. Baker’s Roman Wall, ready to ski 5,000 vertical feet of softening snow back to camp. For Soens, 31, the location and impending descent feel like freedom. While skiers from Warren Miller to beginners on the rope tow like to talk about the freedom the sport provides, that platitude has a deeper meaning for Soens.

The Boise, Idaho, resident spends the majority of her time in a wheelchair, but as soon as she’s strapped into her sit-ski – a seat suspended above a single ski – she feels “so much less disabled,” she said. She may have been slower than her partners on the climb, which was the first paraplegic ascent of Mt. Baker, but now she’s on equal footing.

As gravity kicks in, she carves low, arcing turns, spraying snow down the 45-degree slope. For Soens – and for most skiers – that level of freedom is unparalleled.

Before a climbing accident in December 2015 left her partially paralyzed, Soens had a life with maximum time outside. She worked as a wildlife field biologist with a schedule of two weeks on, one week off: two week studying cougars and investigating their kills in remote wilderness in Nevada, followed by one week rock climbing, and repeat.

“I was basically just paid to camp and hike and follow mountain lions around central and western Nevada,” she said. “I spent eight months that year living out of a backpacking tent and work trucks. I didn’t have a physical address, didn’t have a room to call my own. I lived and worked and breathed outdoors the whole time.”

She was visiting family in Portland, Oregon, for Christmas 2015, and getting in some time at a climbing gym on December 17. After climbing multiple laps on an auto belay device, which takes up slack for climbers and then lowers them slowly, she decided to go for one more lap and forgot to clip in. She let go and leaned back at the top of the wall and fell 35 feet, landing in a sitting position and breaking her lowest thoracic vertebrae. Doctors told Soens she’d never walk again.

A week later, Soens and her family celebrated Christmas in the hospital and she gave her father a guidebook for climbing Mt. Hood – a gift she purchased before the injury, as they were planning on climbing it together. “I figured I’d still give it to him,” she said. “I don’t know if I actually believed it was still possible when I gave it to him, but I was hoping for the best.”

After surgery, Soens moved in with her brother in Portland, where it hit home that her life was irreparably different. In the months after her injury she regained some function in her legs and can walk short distances with leg braces and crutches, but tasks she previously did automatically were now challenging. Her former lifestyle was impossible. Navigating day-to-day life in a wheelchair, though, wasn’t as challenging as the realization that she had lost her exceptionally independent life.

“After my accident, the actual physical paralysis was kind of secondary. The lack of freedom was what hit me most,” Soens said.

When I first fell, I thought the age of exploration and seeing new things was over

She took a year to focus on physical therapy and quickly discovered the world of adaptive sports. Just a few months after the accident, she went car camping by herself and she was soon exploring new sports such as kayaking and rowing.

A year after her injury, though her life wasn’t the same, it was coming back together. She got a job in the same field, but this time at a desk in Boise, as a biologist for the U.S. Fish and Wildlife Service. She met a community of adaptive athletes and had her eye on a three-wheeled hand-pedaled mountain bike and a sit-ski, toys that can cost $10,000 each. She sold her beloved climbing rack, applied for grants and eventually bought those things. Bend, Oregon-based Oregon Adaptive Sports helped train her to use them, enabling her to get outside in new ways.

On the way home from a ski trip to Crested Butte, Colorado, she emailed a bunch of friends to see if they were interested in helping plan a trip up Mt. Hood. A friend who guides adaptive rock climbing put Soens in touch with Mike Elges of Baker Mountain Guides.

With the help of a friend, Soens modified some ski poles, replacing the handle with forearm crutches. The poles allow her to stabilize most of her weight with her arms. To climb, she plants her ski poles and hoists her body up with her triceps. She has strength and movement in her quads and hip flexors, but little use of the rest of her legs. On steep enough terrain, she can guide her feet into steps kicked by her climbing partners. On really steep terrain, she drops to all fours into a bear crawl, aided by crampons and two ice axes. Adaptiveathletes typically have to come up with creative ways to use equipment and their bodies. For Soens, there was no blueprint.

“You have to be kind of a MacGyver because there’s always problem solving,” she said. “Depending on your background and how you’re feeling on a particular day it can be a fun challenge or really daunting.”

Despite the challenges, the technique got her to the summit of Mt. Hood on May 29, 2018, along with her father and 12 others. Climbing the mountain together was probably one of the most important things the two of them will ever do, Soens said. “It was hugely significant to both of us,” she said.

The climb was more than a way for Soens to fulfill a pre-accident plan with her father: the experience opened up a world of possibility and adventure. Climbing peaks and skiing down them could fill the void left by rock climbing, her passion before the injury.

“When I first fell, I thought the age of exploration and seeing new things was over,” Soens said. “Especially since I’m still new to skiing, it still has so much excitement for me. It has this level of freedom that I think is a little unparalleled.”

By the end of the trip, Elges, Soens and her friends were talking about what to climb next. Baker was an obvious choice – the skiing on Mt. Hood was icy and shrouded in fog: Baker would be a better ski, Elges promised, and Soens didn’t need much convincing.

On May 10, 2019, Soens, Elges and 11 others set out from the Park Butte trailhead on the south side of Mt. Baker, aiming for the Squak Glacier. Though Baker isn’t as tall as Mt. Hood, the climb would be more challenging due to a longer approach, bigger glaciers and three times the elevation gain. It’s also more remote, with a rescue being farther away.

They planned four days for the climb: two-and-a-half to go up, one-and-a-half to get down. Soens walked some of the first day, and rode in a sled towed by three others for parts of it – the mellow terrain low on the mountain is actually harder for Soens than the steep glacier climbing above. The group divided her gear, including the sit-ski, to leave Soens unencumbered. At the end of the first day, the team camped at about 6,500 feet. 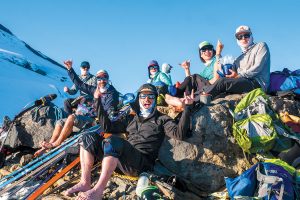 On the second day, they climbed another 3,000 feet to a camp near the summit of Mt. Sherman. Elges and the other guides from Baker Mountain Guides put more effort than typical into the food, cooking fajitas and other hot meals devoid of dehydrated ingredients. Much of the team was also on the Mt. Hood climb – people Elges met for the first time on Hood were now friends.

“One of the best parts about the trip was that it didn’t feel like anything super special,” he said. “Mostly it was just climbing this mountain as a group of friends and having a really good time doing it. It never felt like you were putting in extra effort to help somebody up the mountain.” 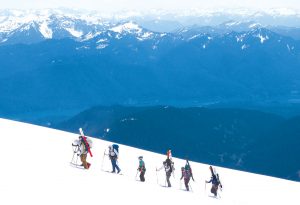 On the third day, the team traversed to the Roman Wall and climbed to the summit, where they celebrated with hugs and cheers before pointing their skis downhill.

The top 500 feet of skiing was a little firm, Elges said. “After that it was glory all the way back down to that low camp,” he said. “She’s just a beautiful skier. It is amazing to see a sit-ski going down the Roman Wall.”

The group camped another night at 6,500 feet before bushwhacking back to the car. Skiing through the lower elevation slopes, riddled with sit-ski-swallowing tree wells and creeks, proved to be more difficult than summiting for Soens. Unlike the rest of the skiers, Soens can’t snowplow on her sit-ski, a useful technique for bashing through tree limbs on a vanishing snowpack.

Being the first paraplegic athlete to summit Baker doesn’t mean much to Soens. Actually, she’d probably prefer not to be. Before her injury, Soens explains, her climbing and other athletic endeavors weren’t pushing boundaries. Post-injury, she feels like she should fall in the same spot on the athletic bell curve.

That’s partly why she’s reluctantly taken on a role as an advocate and example for adaptive athletes. She’s done countless media interviews and she let a film crew come along to film her Mt. Baker ascent for an upcoming documentary called “Adapted.” She doesn’t love being on camera, but it’s worth it to help normalize the kind of adventures she’s going on, she said.

“I’ve agreed to do these things to help bring awareness and help normalize these types of adventures. There’s a huge capacity in other folks with disabilities to pursue these things,” she said.

And for those who don’t have disabilities, the will of adaptive athletes to climb mountains is a powerful example of the importance of remote landscapes and playing outside. That’s what Paul Bikis, director and producer of Adapted, aims to highlight in his film, which he hopes to release in late 2020.

After her spinal cord injury, Soens connected with a group of mentors and other adaptive athletes that inspired and encouraged her. While her new life is different from her old life, Soens is OK with that.

“Honestly, I feel really lucky to have found these sports and this community where I really do feel that my life is as good if not better than before my fall,” Soens said. “I feel like I’m still pushing my boundaries, still having fun, still being fulfilled. I think before this injury I was in a bit of a rut, bopping around between seasonal jobs. If anything, I feel that I almost have more direction now. I don’t know if purpose is the right word, but I do have this community and I value my time outdoors more than I used to.”