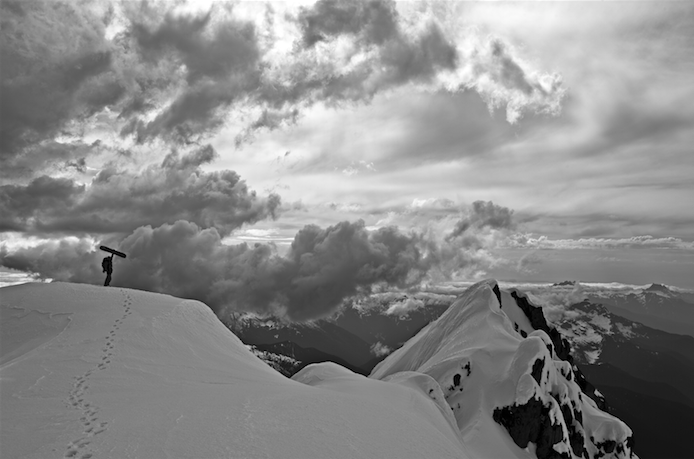 In June 2013, photographer/backcountry skier Jason Hummel and professional splitboarder Kyle Miller hiked and skied the Cascade Crest from Highway 20 near Ross Lake south to Holden Village, Glacier Peak and out Whitechuck River Road to Darrington. Over 16 days, the duo traveled 120 miles and climbed a total of 60,000 feet on a route first envisioned by late ski pioneer Carl Skoog, who dubbed it the American Alps Traverse. Jason Hummel recorded the trip in words and photographs. The following is a selection of his observations.

When beginning, it is best to start like one jumps into a cold lake or, in our case, a web of forest. Fully committed, we dove headfirst into the leafy waves and rose as fast as we could toward the alpine zone.
Somehow a vertical mile of climbing doesn’t ever go as fast as you would like, but when we burst from the greenery, our universe expanded from our feet to the horizon. To the northeast were the massive shoulders of Jack Mountain. To the northwest were the impregnable walls of the Picket Range. In between and further encompassing us were the mass of peaks that make up the formidable North Cascades. Of the 1,100 glaciers in the contiguous United States, nearly 800 of them are located in the northern reaches of Washington state. It is truly a sight one should witness and experience, especially from a summit. 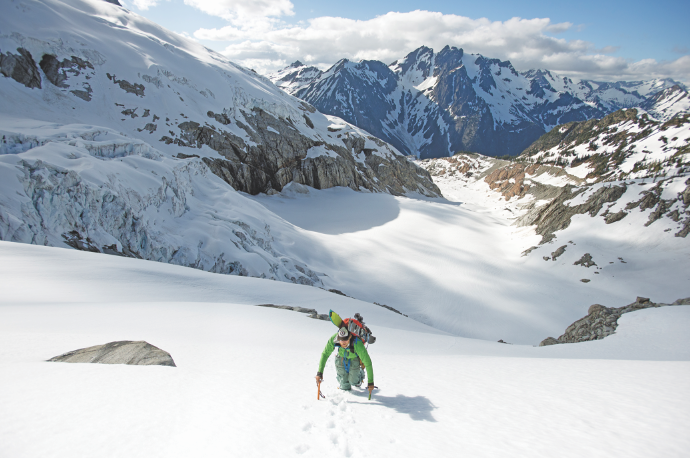 I studied my worn and crumpled hand-drawn map from a decade ago. The line curved up the Chikamin Glacier, leading into one of those silent corners of the Cascades that I’d never heard of anyone traveling into, although I’m sure many had.
Privileged – that’s how I felt as we climbed beneath the towering shoulders of the immense and breath-stealing Chikamin Glacier.
Two thousand feet higher, I stood eyeing the shadows of clouds rolling beneath the north face of Sinister Peak. Years before, Lowell Skoog, his brother Carl – also a photographer – my brother Josh, Jon Mauro and I became the first to ski Sinister.
Together and separately the Skoog brothers had pioneered dozens of descents and traverses in these mountains. The first descent of Sinister would be the last time Lowell ever skied with his brother. A few months later, in 2005, Carl tragically fell to his death on Cerro Mercedario in Argentina.
Before his passing, back on Sinister Peak, Carl’s exuberance was contagious. Like a star-struck kid, I asked him all I could about photography, and he shared what he knew with a rank amateur. What would I have asked him if I knew it’d be our last conversation?
Like me, his tales are told in his images. In the shades and shadows. Between the curves and shoulders of mountains. Within the waves and flow of streams and glaciers. In the moods wrung from darkness and light. Bled at last, in finality, from the reds that crackle on the horizon.
We dug out a spot in the snow and pitched our tent at a notch below Gunsight Peak. I set my alarm for 3 a.m. With my camera and tripod, I left the tent. The cold parried with my fingers. Above me the stars were so bright. Stretching my hands out, my palms cupped worlds like water. I felt like some great star-monster. Hanging from the ridge, perched atop boulders, I sat, freezing
the seconds.

Above Crown Point Falls, Kyle and I hid our skis and hung our other unnecessary gear from an old snag. The views from our high vantage wiped the tiredness out of our eyes. The excitement was palpable. We were about to detour to Holden Village, where we had food and fresh supplies waiting.
As we descended into the valley, the colors and the seasons brightened. At each creek crossing I drank my fill. At each viewpoint I feasted my eyes on the green hills, high peaks and thundering waterfalls. To pass some time, I took a swim at Heart Lake while waiting for Kyle. Neither of us was in a hurry. Our hunger was forgotten. Maybe the mind requires more nourishment than the flesh?
Either way, the hike soothed me. Weariness blew off me like the leaves from the vine maples that leaned over the trail.

We descended and stopped, stuck like a nail between Fortress and Chiwawa mountains. My eyes strained. I searched the fog. I didn’t know where to go from here. With only bad options, I chose to take the high route over the summit of Fortress Mountain. It was the most risky of the options, but I was convinced it would go, and Fortress and I had a history. In 2008, mere feet from the summit, an avalanche swept me 1,000 feet down the steep, cliff-riddled flanks. I was lucky to survive.
Kyle was doubtful of my route choice and rightfully so, but I didn’t need to remind him of our adventures in Agnes Creek and our descent into that misbegotten hag of a valley to win this argument.
A short time later, everything Kyle had feared was staring him in the face. I was only getting more determined. I laughed as I reached up for a rocky handhold. Instead of stone, I found a rappel sling to hang from. Looking down I saw Kyle. He looked up at me and groaned, “How does it look?”
Was it crueler to lie or to tell the truth? Leaning towards optimism, I lied. “It looks way better,” I threw down like a bomb. I lit the fuse. “If we can traverse this rock slope, I think we can get there,” I added. Kyle’s eyes erupted in fire, but he said nothing. He was as determined as I was.
To either side of us were long-faced cliffs, looking sad and dejected. I felt the terrible hunger of their yawning mouths and saw their teeth far below. I fed them scraps of stone as I grappled across with my crampons. I crossed ice-layered boulders, pivoted across smooth granite and finally leapt lightly to the snow. Only then did I feel success creeping in. Ten dangerous steps on a porous 60-degree snow slope and I was onto rock again. A few vertical moves and I was there. The clouds melted away, the peaks emerged to look at me and the sun put her lips to mine.
I watched my magnified shadow dance on the mist below within a Brocken spectre, a natural phenomenon I’ve only seen three other times. I couldn’t take my eyes off the spectre and its kaleidoscope of colors. They circled as if submerged in oily water. This was among the happiest moments of my life.
Only when Kyle squeezed by me did I join him in our march along the narrow ridge. First to the summit, Kyle stopped and raised his hands. He let out the loudest yell I’d ever heard him make. Was he roaring a challenge at Glacier Peak? It was our last great obstacle. I liked to think he was.

Two hundred feet before the summit, I was on my knees. Kyle was right behind me. We had been going so fast. Too fast. My legs threatened to buckle. Can you believe that? Weeks of touring and I was as strong as I’ve ever been. While mentally I could push on, physically I was at my limit. I had nothing left. Then I heard the buzzing. I knew that sound. Above me the sky had a dark expression. I saw lightening dancing on the peaks in the distance. The buzzing? It was the electricity in the air crackling on my ski edges!
Thunder fell onto my ears, shook my soul and excited me. It was like fireworks. It was bombs bursting. It was a celebration. There was no one else but us – just mountain peaks leaning in.
Then, like that, we were on the summit. Never had I put so much physical effort into completing a singular goal in my life. I fell to my knees again. I took in those feelings of success. I swam back through the memories. The colors. The blue sky. The blue-eyed lakes reflecting back. The white clouds. The white snow. The yellow sun. The yellow meadows of glacier lilies. The black sky poked through with starlight. The rainbows. The spectrum of memory. The melting pot. 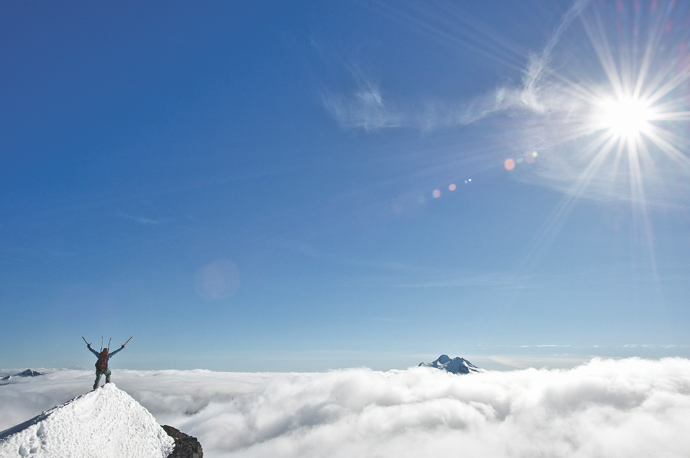 We arrived at the gate and dropped our packs on the other side. The weight of weeks of effort slid from our shoulders. The bugs swarmed. We didn’t care.
Looking up into the dark forest where we began our journey 16 days before, I shuddered. There was no color at all; just darkness, in contrast to my memories, which were like a vibrant colorful meadow stretching in all directions. When I looked back down at the black pavement, I closed my eyes. In my head, the sun was setting on a beautiful chapter, but I knew that a new day would rise. Any adventurer knows that life is not measured in weeks, months or even years, but in adventures realized.
With that final thought, I grappled with the keys and cranked the ignition, returning down Highway 20, back towards civilization and on to my next adventure.   x