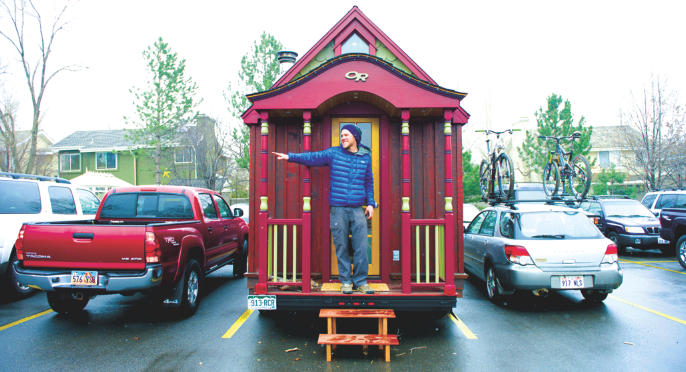 At Home with Zack Giffin

By Molly Baker | Photo by Re Wikstrom

As a professional skier, Zack Giffin is known for an extensive knowledge of Mt. Baker’s backcountry skiing and pillow zones. Splitting time between the Mt. Baker parking lot, Glacier and his family’s home on Lummi Island, he bleeds Cascadian spirit, especially for a guy from Colorado.

After three years of living and traveling around the Pacific Northwest in the Outdoor Research tiny house (which he built) he recently launched a career as a television co-host and starring carpenter for the FYI Network’s “Tiny House Nation.” Featured everywhere from The New York Times to Good Morning America, the world has now been introduced to a new Zack Giffin: the enthusiastic pro skier who handles a knowledge of carpentry and tiny dwellings just as well as his powder-caked skis.

Molly: What have been some of the transitions from the world of skiing to working as a co-host on “Tiny House Nation”?

Zack: There are many parallels between the two worlds, like constant travel, waking up early and not having a consistent home life. Now, I am just waking up early to build tiny houses and work with a television crew instead of for powder turns.

Being a skier is much like the life of an entrepreneur, with the business side of things, like negotiating contracts, and most of your work being largely self-motivated. Having pushed myself in the mountains, I know what a long, hard day feels like and I can bring those lessons to television work. I understand that if I want to flourish I have to make a similar effort to what I would put into a pre-sunrise to post-sundown day in the mountains. The training from my life in the mountains has definitely given me a competitive edge.

Zack: The tiny house movement revolves around environmentalism on many levels. As a culture we tend to focus on transportation when it comes to sustainability, but the reality is our living situations are just as much of an issue from the building, heating, cooling and endless filling of our big homes. These are the reasons why my involvement in tiny houses is worthwhile.

I’ll definitely be skiing a lot less this season because of the show, but the sacrifice is worth it because of the rarity of a mainstream media outlet that provides coverage of environmental issues. It starts a conversation about limiting excess. It might not be skiing at Mt. Baker, but it’s exactly what I like to do, which is plugging away on creative projects.

Molly: Do you think living near the Cascades and within that community provides unique opportunities and ideas for lifestyle changes?

Zack: You can’t help but be a nature lover here. The level of beauty is just so inspiring. People in this area are aware of the amazing landscape around them and consequently how they want to protect those places.

It’s easy to see what you would lose without conservation because it’s right there in your everyday life. When we talk about glaciers melting, people at Mt. Baker can see that. This has led to a conservation culture that harbors strong values in sustainability. Being sensitive to how you contribute to the detriment of the Earth isn’t a fringe value in the Northwest, it’s a mainstream attitude. That’s unique in the U.S. and it’s what I love about the place so much.

Molly: What will you miss most about being based in the Bellingham area?

Zack: Ask me in the middle of the winter when it’s snowing – I’ll definitely only be able to think about skiing. But overall, what I’ll miss the most is living out of my own tiny house and having that feeling of place and people. And the mountain biking too; whenever I get back I always visit with my family and then either ski or mountain bike. The mountains are why I live here.

Molly: Do you have any plans for your own tiny home to permanently reside in Washington?

Zack: Yes. Anyone have the perfect piece of land for sale in Glacier?   x