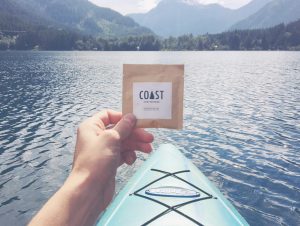 Coast Protein, a Vancouver, B.C.-based company, is preparing to launch its protein bars later this summer in three tasty flavors made from natural ingredients including organic Canadian cricket flour.

Crickets can be found in cuisines around the planet, but they’ve only recently made it into the kind of snacks North Americans bring to the mountains for an energy boost. There are many good reasons to eat crickets: The chirping insects take 13 times less water, 12 times less feed, and produce 100 times less greenhouse gases per pound than a dairy cow, as Coast Protein’s marketing points out.

They’re also highly nutritious and relatively inexpensive – qualities that have led some to call them the future of protein. And as a futuristic bonus, they have antennae.

While feasting on crickets is easy on the Earth, getting them into a bar comes with some serious challenges. For one, crickets have a stronger flavor than the proteins used in other bars, which are often whey- or soy-based. Coast Protein’s CEO, Dylan Jones, compares the flavor to mushrooms and roasted almonds – not a bad flavor, but challenging to turn into a diverse line of sweet and savory protein bars. Also it’s not easy to turn an insect with a hard exoskeleton into a baking ingredient.

“You have to have some pretty talented bakers,” said Jones, a regular at the Mt. Baker Ski Area.

Evidently Coast Protein’s bakers and food scientists know what they’re doing. Their chocolate sea salt bars, of which they produced samples this summer, tasted like, well, salt and chocolate. That is to say, they’re delicious, and without knowing beforehand, one would never guess that crickets are the main source of protein.

Currently about 85 percent of Coast Protein’s ingredients come from Canada or Washington state, including the crickets, which currently come from Ontario.

“We focus really highly on the sustainability aspect,” Jones said. “We’ve shied away from using dates, almonds, cashews and other really water-intensive crops. We realize it’s a big world and there’s a lot of things that need to be changed and we’re trying to change a small part of it.”

Bike touring to climb in the Bugaboos, a dream long in...