Story and photos by Pat Grubb

Every school kid growing up knows the story of Johnny Appleseed and how he wandered around Ohio, Pennsylvania and Indiana in the late 1700s sowing apple seeds wide and far. What a guy, everyone thinks. Well, that happy fable is bit of a stretch.

First, he didn’t spread seeds but, rather, he planted nurseries. Second, because he didn’t believe in grafting, his apples weren’t exactly the sweet and edible kind. According to Michael Pollan in his book, Botany of Desire, the apples could only be used to make cider: “Really, what Johnny Appleseed was doing and the reason he was welcome in every cabin in Ohio and Indiana was he was bringing the gift of alcohol to the frontier. He was our American Dionysus.” The obvious lesson is, if you want to be popular, make it possible for people to make their own booze. If you want to be really, really popular, make booze for the people.

That’s the tack taken by John and Dorie Belisle, owners of BelleWood Acres and BelleWood Distilling. And they’re really, really popular with their customers.

Having spent most of their careers in retail, John and Dorie were looking for something different when they moved from Florida to Washington state. Something less customer-oriented, John says. Things didn’t turn out the way they planned it; in fact, it turned out the exact opposite. The Belisles are now running one of western Washington’s largest u-pick operations along with a country store and café and distillery under the names BelleWood Acres and BelleWood Distilling. 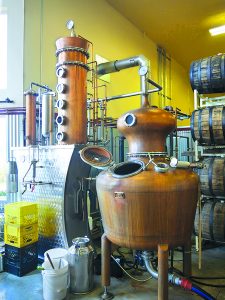 About five years ago, the Belisles decided to get into the distilling business. After hitting the road and visiting everyone who they thought knew something about distilling, they came back and learned for themselves, John says. Having invested nearly a hundred thousand dollars in two stills, handmade by Vendome Copper and Brass Works in Kentucky, they got to work. Unlike Johnny Appleseed, the Belisles control the entire process from growing the apples, fermenting the juice, to distilling the alcohol, to adding the botanicals for the finished product. “That’s where the artisan aspect comes into it,” John says, pointing out that many so-called distillers don’t do any actual distilling but buy cheap ethyl alcohol for $5 a gallon.

Different batches of fermented apple juice will produce different qualities and flavors after being distilled; the best batches are reserved for brandy which then undergoes aging for at least two years in oak barrels. “We call it our Reserve Brandy. We actually take wood from up there, toast it and put it in the barrels to tie our orchard in with the brandy. And that really creates magic, doesn’t it?” John says, turning for confirmation from Michael Brannan, who is the company distiller. Brannan is a Western Washington University graduate who majored in chemistry and learned on the job how to distill. “You can’t run a still in a college apartment. Or you shouldn’t,” he says. Pointing to another batch, John says, “I believe we are the only ones in the world making Honeycrisp vodka.” Regardless of the base ingredient, whether it’s apples, potatoes or grapes, once it’s distilled to 191-proof, it’s considered vodka.

Whenever they finish up a batch of hooch, the distillery holds a Sunday afternoon bottling party for volunteers to help hand make about 700 bottles of spirits. If you’re interested in joining in, you can ghgn up during a visit to the distillery or email for more info. You’ll get a short tour, sample some spirits, enjoy food from the Country Café and get a 20 percent discount on a personally signed bottle.

The distillery is currently producing three varieties of vodka: signature, honeycrisp and raspberry; two brandies, reserve and eau de vie; one gin and two liqueurs, Bruce and pumpkin spice. Bruce is a blend of apple cider and brandy while the pumpkin spice is vodka with pumpkin, sugar, spices and homemade vanilla which makes for a smooth dessert drink.

You get an idea of the thought that goes into distilling when John tells the story behind the gin. “When we started making gin, my goal was to have a gin that 75 to 80 percent of the people would like. We went through over 40 runs before people started to smile.” The gin is made by infusing a vodka base with juniper, coriander and five other botanicals to create a soft and refreshing sipping or mixing gin.

The artisan approach to distilling has served the Belisles well. The website lists 19 individual awards they have earned, with their gin in the lead with eight awards in total. 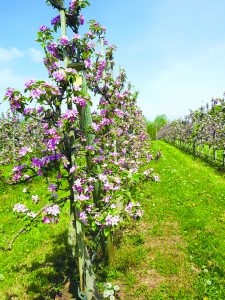 The Belisle family planted the initial apple orchard back in 1996; there are now over 25,000 fruit trees on the 62-acre farm located on the Guide Meridian about 20 minutes from the Canadian border. To see all these trees in bloom, visit during late April or early May; it’s a sight you won’t soon forget.

The Belisles believe in sustainable and environmentally responsible farming. They use integrated pest management to provide effective pest control while maintaining a healthy ecosystem. Doris is also the project manager for the Tenmile Creek watershed project. Tenmile Creek is a salmon-bearing creek that runs through the farm which is the first Salmon Safe orchard certified by Washington state.

BelleWood Distilling spirits can be found in liquor grocery stores throughout the state. Locally, you can purchase their products in Haggen Food Grocery Stores and Community Food Co-ops. For a list of stores, go to bit.ly/2HYaTBp.

The distillery’s hours of operation are Wednesday through Sunday from 8 a.m. to 5 p.m. It’s located at 6140 Guide Meridian, Lynden. From I-5, take Exit 262 and head east to the Guide. Turn left and it’s on your right a few minutes up the road. Tours are held noon and 2 p.m on Saturday and Sunday. To make reservations, call 360/318-7720.

The farm has a 14,000 square foot farm market, gift shop and country café and bakery. The market is a great place to pick up fresh, locally grown fruits and vegetables, products made on the farm, and country gifts. The café features light breakfast, lunch and dinner menus that include soups, salads, sandwiches, seasonal entrees, fruit/cheese plates, espresso, wines and ciders on tap. And, of course, there is a full bar offering BelleWood Distilling products.