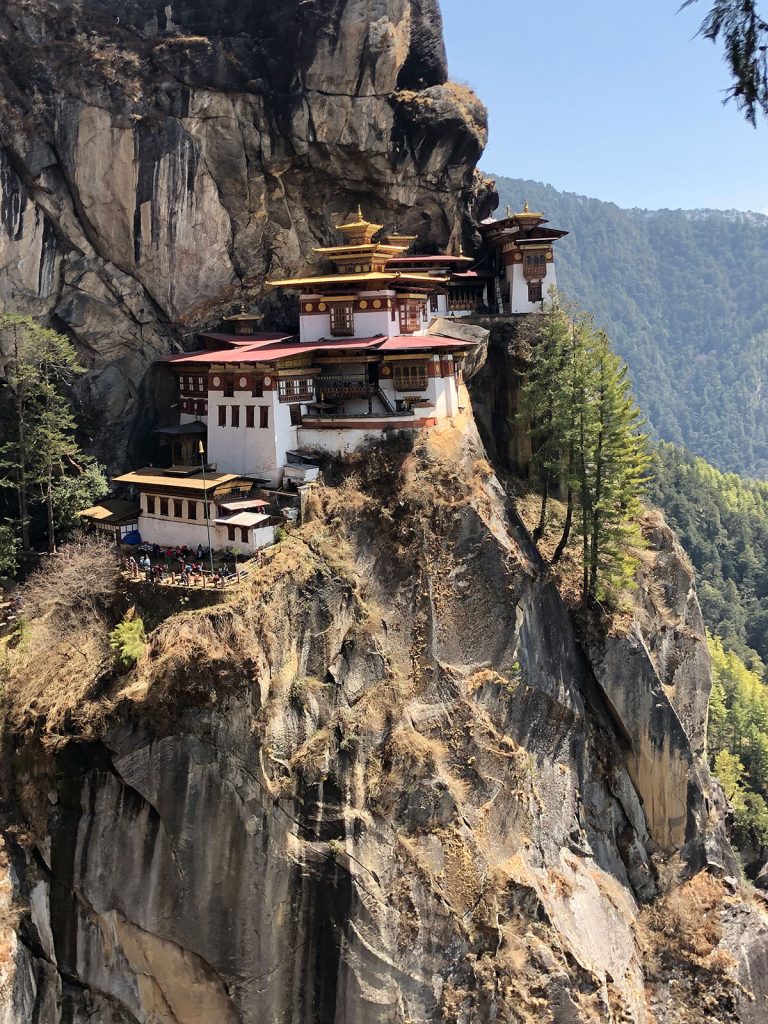 Story and photos by Patrick Grubb

For those travelers seeking an off-the-track experience, Bhutan is the place to go. A land-locked country of less than a million people, Bhutan is bordered by India and China. To the north, the southern slopes of the eastern Himalayas rise over 23,000 feet while the south features low-lying subtropical forests and lowland river valleys with mountains no higher than 5,000 feet. Accordingly, the climate varies with the elevation and ranges from warm and sub-tropical in the south to temperate in the highlands to bitterly cold in the north.

It’s not the easiest country to get around in – there are no trains and the roads are extremely narrow with precipitous drop-offs and hairpin turns. The Bhutanese drive on the left here and given that most roads are about a lane and a half wide, it’s a miracle that any car still has a passenger side mirror attached. While there are four airports in the country, Paro Airport is the gateway for international travelers. Situated in a valley surrounded by mountain peaks reaching 18,000 feet, approaching and departing planes make sudden changes in altitude and direction resulting in a plane full of white knuckles and nervous giggles. Planes can only access the airport during daylight hours and flights are often canceled due to high crosswinds. Very few pilots are certified to make the trip. Here’s a video that will give you an idea of what’s it like to come in for a landing (bit.ly/39nhOwY).

The government is a parliamentary democracy; the head of state is the Dragon King, Jigme Khesar Namgyel Wangchuck, who sits atop a constitutional monarchy. His father, King Jigme Singye Wangchuck, coined the phrase Gross National Happiness index in 1972, which he said was more important than Gross National Product. The concept was subsequently enshrined in the Bhutanese constitution, enacted in 2008.

Bhutan is currently on the list of Least Developed Countries from which it hopes to graduate by 2023. While hydroelectric power is its biggest export by value, coming up on the list is tourism. Traveling in Bhutan can only be done by guided tour. Each traveler pays a minimum of $200 or $250 per visitor (depending on month of travel) on touring and accommodations. Included in the price is a $65 per day sustainable development fee that goes towards free education, healthcare and poverty alleviation. All international visitors require a visa ($40 USD). Tourism was only allowed beginning in 1974; the numbers slowly grew from 2,850 in 1992 to just over 250,000 in 2017. Unlike most Asian countries, scenic spots are mostly occupied by the locals and not hordes of other tourists.
Buddhism is central to Bhutanese life. Roadside shrines, stupas, prayer wheels and flags and temples dot the landscape in incalculable numbers. However, Christianity, Hinduism and Islam are also practiced in the country. There is no caste system in Bhutan; slavery was abolished by royal decree in the early 1950s.

For the adventure traveler, kayaking, rafting, biking and trekking are the main attractions. River kayaking ranges from easy stroking to big, bad rapids requiring advanced skill levels. There are western adventure companies who can arrange tours in advance that are custom designed for your party. Mountain biking also runs the gamut with relatively flat valley rides accompanied by support vehicles to mountainous terrain 12,000 feet up in the air with single tracks and rock gardens that are as gnarly as you like. Same goes with treks — you can arrange for a relatively easy-going two– or three–day trek or spend around 25 days doing the famous Snowman Trek considered by some to be the most difficult trek in the world with 11 passes as high as 17,000 feet.

An easier hike by far is the one to the Tiger’s Nest Monastery perched on the side of a mountain 10,232 feet high. The trail is wide and rocky and takes about seven hours roundtrip. Some people hire ponies for a few dollars which can take them about halfway up the trail. The monastery was constructed in 1692 and is the sacred Buddhist site to where Guru Rinpouche was said to be flown on the back of a tiger; this marked the introduction of Buddhism to Bhutan. In 1998, a fire broke out in the main building of the complex thought to be caused by either an electrical short or butter lamps lighting the hanging tapestries on fire. The monastery was restored in 2005 by the government and then-king Jigme Singye Wangchuck at the cost of approximately $2 million U.S.

Whether it’s adventure or spirituality that brings you to Bhutan, you’re bound to find what you’re looking for in the happiest country on earth.

Travel Help
Local travel pro Joan Dickerson has plenty of experience in Bhutan and can help travelers with the arrangements starting with visas and flights as well as accommodations, travel and guide services in the country. Connect with her at joan@uniqdestinations.com or by phone at 360/510-0242. Go to uniqdestinations.com for more information.