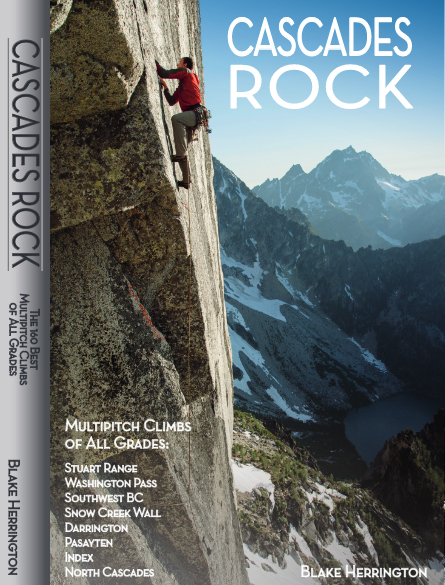 Professional climber and writer Blake Herrington has been a staple of the North Cascades climbing scene for several years now. He has more than two dozen new routes and first free ascents in the Cascades, the Alaska Range, Colorado and Argentina. His writing has been featured in Alpinist, Climbing and Rock and Ice magazines as well as in newspapers like the Seattle Times.

Blake has a deep knowledge of the Cascade Range. He recently completed a new guidebook by sifting through that knowledge and picking out the gems. Blake’s full-color book, “Cascades Rock,” details 160 routes in the region and includes dozens of topos, interviews and photos.

Blake took a chance with this book. Many of the mountains and features covered here are covered in other texts – there is a lot of competition in the Washington guidebook arena. But he needn’t worry too much. His book is absolutely beautiful and stands out dramatically against the competitors.

The book covers peaks, such as Dragontail and Prusik, and it also covers walls, such as Snow Creek outside Leavenworth and Green Giant outside Darrington. But what makes this book stand out is the attention to detail. I’ve climbed Green Giant Buttress three or four times, and every time I’ve found myself floundering, trying to understand where the routes are located. But Blake’s book is so detailed that I know I will always be able to find those routes in the future, no matter how confusing it’s been in the past.

In addition to some of the well-known walls, Blake’s book also includes several lesser-known areas. He covers places like the Twin Sisters and Mamie Peak in the Mt. Baker area as well as the Supercave Wall in Washington Pass.

Each chapter starts with a map of the area, a breakdown of camping issues and red tape and then launches into the meat. Many of the routes have photos and topos, and every route has a description. Each page is filled with multi-color information, which is incredibly pleasing to the eye.

Some of the routes are a bit remote. It can be somewhat daunting to burn a day trying to get to a route, only to get stymied by bad approach or climbing beta. This seems unlikely with “Cascades Rock.” The book doesn’t get bogged down in any one thing. Instead, it provides all the beta you need to climb a route.

The only criticism that I have of this guide is that it is heavy on harder climbs. There’s no doubt that the climbs in the book are awesome, but Blake probably could have added a couple dozen more routes in the 5.5-5.7 range for those who want to get after it with a little bit less commitment.

In the end, the most important thing that any guidebook can give you is psyche: psyche for new areas, new routes and new experiences! Many of the routes in Blake’s book I was aware of, but didn’t have that tight of a grasp on. The situation is different now. I can’t wait to get out there and try some of the lines detailed in the book!

Mountain Trivia: A great bouldering spot in the Chuckanuts, and what...