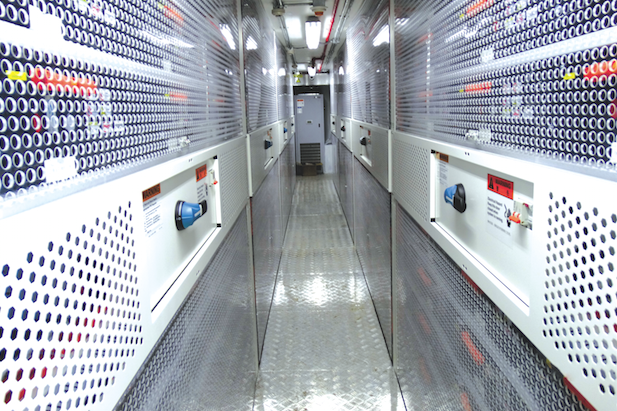 The community of Glacier may be one of the first cities in Washington to test a new battery-powered backup system, potentially paving the way for other microgrid systems in isolated regions around the state.

The town, nestled in the Mt. Baker foothills, has been plagued with extended power outages throughout the last few years. Its remote location makes restoring power a bit of a challenge, and some outages have lasted for more than 30 hours.

In other cities facing similar situations, the power company would engage in some extensive tree-trimming to run additional power lines to the city, but Glacier’s location along the scenic Mt. Baker Highway makes this an unattractive, and expensive, prospect. With the installation of the new backup battery array, the town will have a cushion to fall back on in case of power failure without sacrificing the natural beauty of the area.

The large lithium ion phosphate batteries will be housed in four shipping containers and stored at the power substation already in place in Glacier at 9967 Vaughn Avenue. The batteries would be capable of producing up to 2 megawatts of power, which would be enough to power 150 homes for around a day. The system would have an estimated 20-year lifespan. It could also be used to boost power efficiency during peak operation hours.

Patrick Leslie, emerging technologies project manager for Puget Sound Energy (PSE), said that the project will be one of the first of its kind in the state.

“I don’t believe that there are any other completed projects like this in Washington,” Leslie said. “There are many places where smaller battery banks are used for backup power for cell phone towers, computer networks and servers, and for other critical commercial and industrial equipment.”

Glacier is home to approximately 300 full time residents, with the population growing to around 1,000 in the busy winter ski season.

The project is funded in part by a $3.8 million Smart Grid Grant from the U.S. Department of Commerce, with the rest of the estimated $5.8 million to come from PSE. The Smart Grid Grant comes from the Washington State Clean Energy Fund, which awards $14 million dollars in grant for projects that demonstrate more efficient and reliable power systems.

If project leads can get all of their permits in place in time, the battery system could be installed by October 2015, Leslie said.

For more information on the project, visit pse.com/inyourcommunity.    x