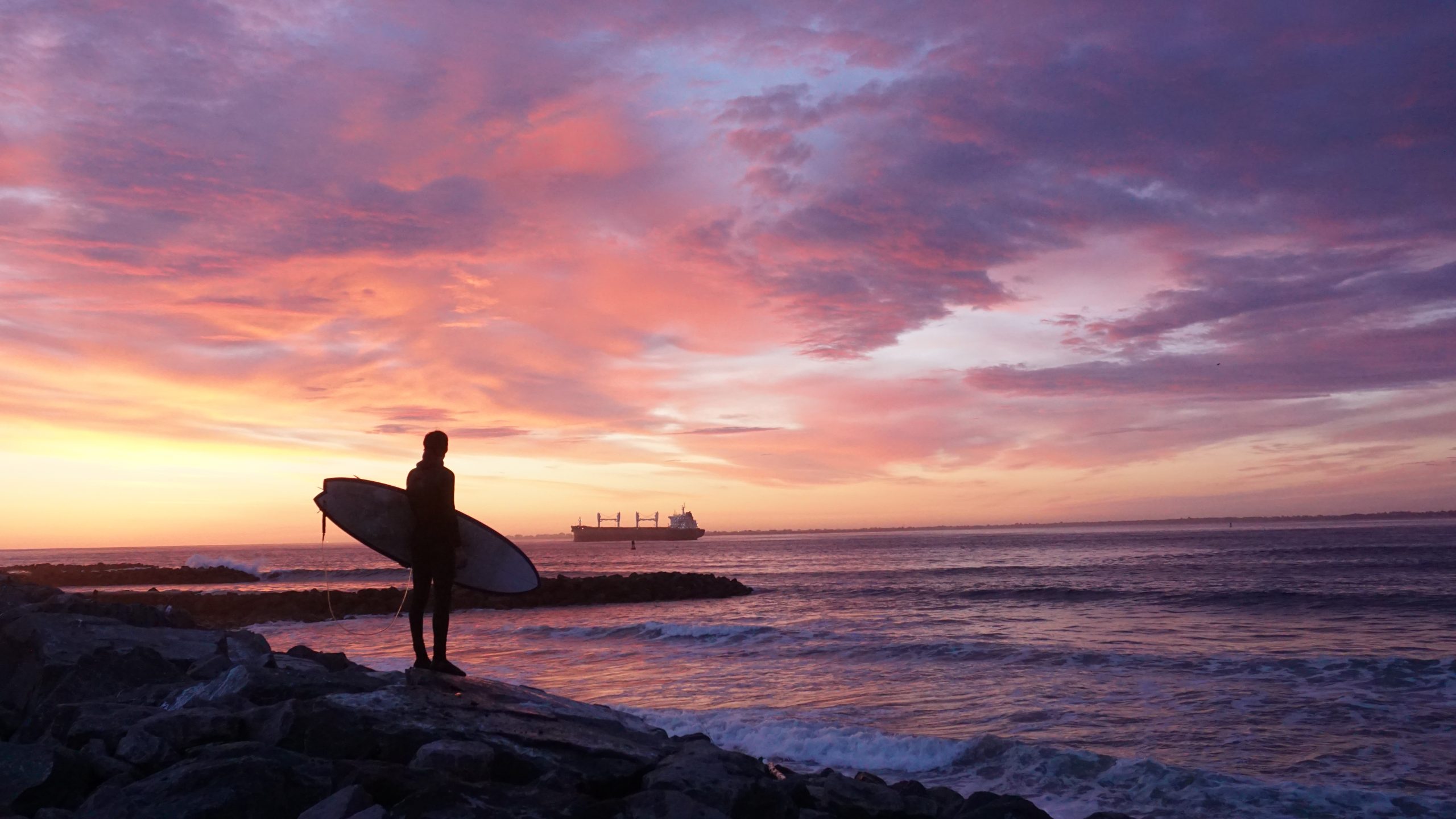 Story and photos by Ian Ferguson

It was 5:30 in the morning in the dead of winter – I was in my car in the middle of nowhere. I had spent the night curled deep into my sleeping bag, searching for the optimal position for warmth. I never quite found it.

The night before, I set out on a long, heavily caffeinated drive. I started in Bellingham, hopped on a ferry from Whidbey Island to Port Townsend, then droned my way down the dark slough of two-lane highways of the Olympic Peninsula until I arrived.

Trying to shake off my morning fog, I endured myself with all the extra clothes I could find and got out of the car. The dialogue in my head that morning was harsh, as it often was on mornings like this. “Why the hell do you keep doing this to yourself, Ian?”

“For the waves,” I reminded myself. All I wanted was to be home and warm. I started the car and started driving again. I had some scouting to do. 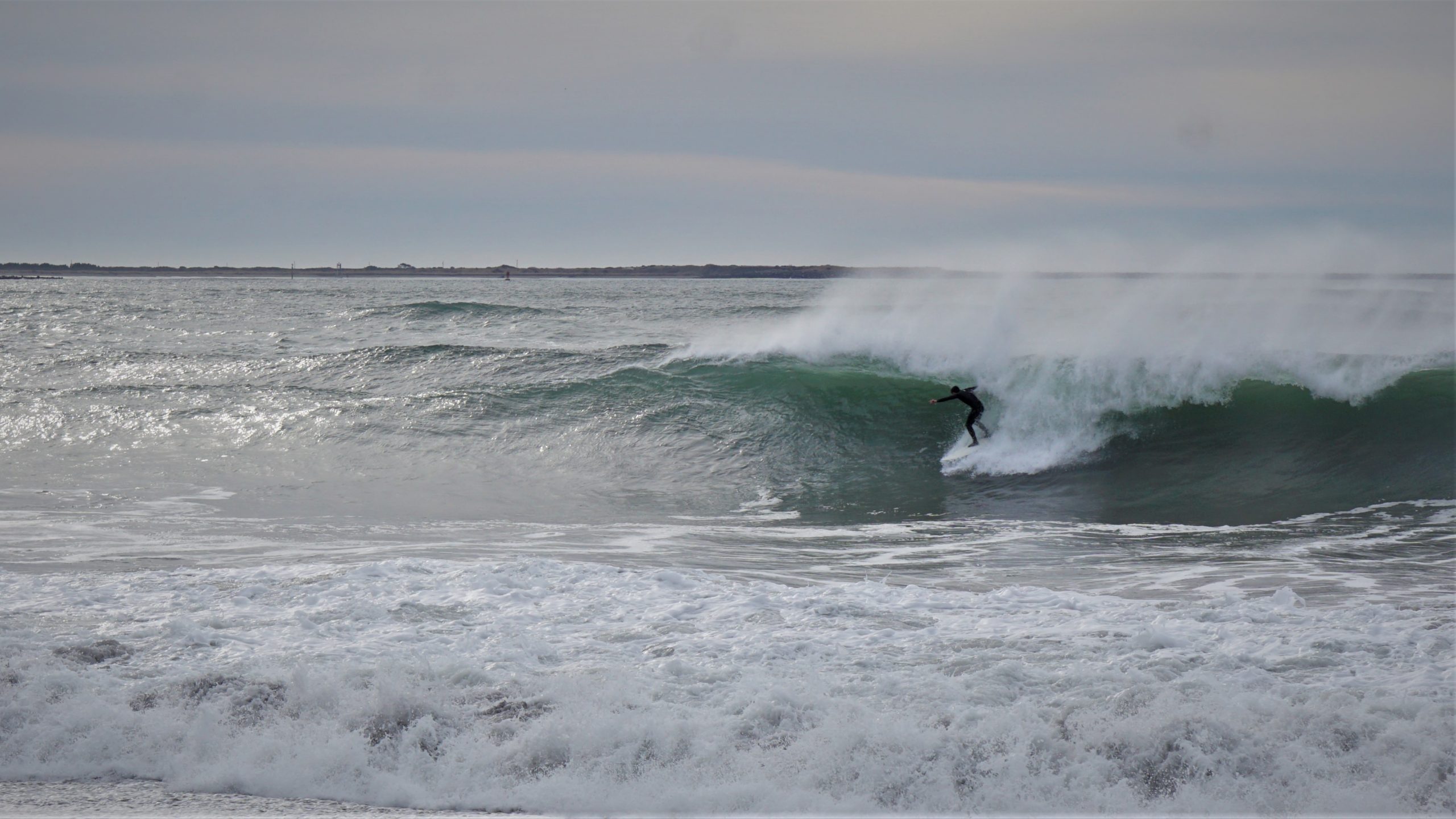 All year long I am eyeing the surf reports trying to decide when to pull the trigger for trips like this. In the winter, that habit becomes a compulsion.

Snowboarders and skiers get excited about a downpour outside their lowland homes, knowing the snow on their local mountain will be another foot deeper the next morning. I get excited too, because crap weather usually means great waves, if you know where to look.

I drove for hours that morning, tracking many miles up and down the north coast of the Olympic Peninsula searching for waves. I checked every established surfspot that exists in the region (that I know of) and I found nothing. Not willing to throw in the towel, I decided to go back to the spot that had the most potential.

As I drove into the parking area, I accidentally looked up and caught a glance of a sign that I usually try not to acknowledge. Smeared in red, dripping paint on a piece of plywood nailed to a tree, I read:

If You Don’t Live Here

I immediately looked away, trying not to let it get to me.

As much as I wish I could be, I am no local to these regions. I drive for hours and catch ferries to find surf. That immediately removes me from the list. But a spooky sign isn’t going to stop me from surfing. If the waves are good, I’m going out.

Still, when I surf in these areas, I have to stay on my toes.

I had packed a bag and brought my boards and wetsuit to the beach. It could be a while before the waves picked up, if they did at all, and I was prepared with a book and a couple of beers.

I had surfed here a few times before and I recalled from those sessions that the waves could go from mediocre to superb in minutes. And once it got good, there was no telling how long they would last. With huge tidal exchanges and a small range of swell directions that can work, you must be ready in an instant to pounce on an opportunity.

I watched for a while and decided it was time to get out there. I worked my way into my wetsuit, strapped on my boots and gloves and waxed my board, all while keeping a close eye on the waves. They seemed to be growing taller on the reef, with better shape by the minute.

My suit flooded with water as I began wading out to the lineup. I gasped with each wall of whitewater I pushed through.

I watched the waves roll in as I approached the take-off zone. The sets moved in from the northwest, showing themselves as small, elevated lumps in the deep water. In an instant, the lumps morphed into large, blue-grey walls. Then, for just a moment, they slowed as if not ever wanting to break. Eventually, after the lip of a wave reaches a critical mass, it lurches forward and crashes with terrific violence.

The immediate transition from deep water to the shallow reef causes the tops of the waves (the lip) to pitch out, forward and around, creating an air cavity. This is known as a tube, or barrel.

Watching this stunned me. I had never seen waves of such consequence from the water. Nor had I ever surfed such consistent barreling waves before.

Cautiously approaching the lineup now, I sat myself at the back of the pack, content with picking off the smaller waves no one else touched. I was filled both with energy and terror.

I noticed that everyone in the lineup seemed to know each other. They were all cracking jokes and talking surf. I knew my presence was probably not welcome. Or at the very least not appreciated. I stayed focused on the waves and made sure not to be in anyone’s way. No one acknowledged me in the slightest – I took this as a good thing.

My first wave had to be a good one. I needed to prove, both to myself and to those in the lineup, that I was worthy of being there. I intently watched the other surfers – studying their movements, trying to soak in their knowledge.

Eventually my wave came to me. It was the first wave of a set, a bit smaller than the others. I paddled toward it, then angled back to shore and paddled hard. I watched the surface fall out beneath me as I rose with the wave. I eyed my trajectory, sprang to my feet and set the heel edge of my board hard into the face of the wave.

I shot down the line with more speed than I imagined possible. The wave’s power coursed through me. Its intensity was overwhelming.

I angled down into the flats and carved back to the face to cut speed and stay in the sweet spot. I grabbed my rail, dropped my back knee and felt the roaring cavity start to envelope me. 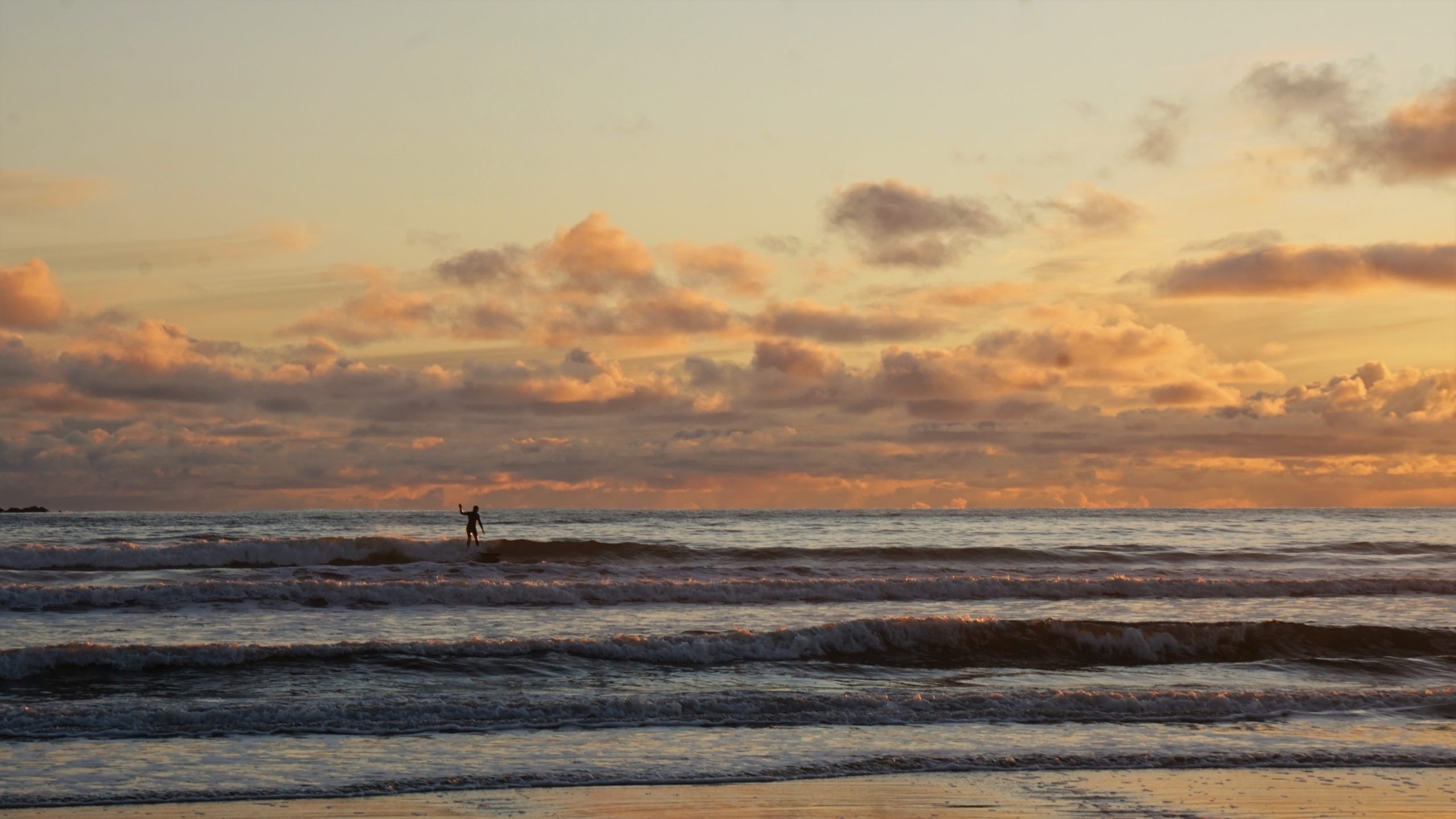 Sounds of churning, tormented water filled my ears from every possible direction. The air around me seemed to grow still and warm and for just a moment my perception of time came to a halt.

I held on with everything I could, but streams of water blinded my vision. Events were unfolding too quickly to make calculated decisions. My instincts guided my movements, but there was only so much I could do – it all seemed like chaos.

Then the lip of the wave cracked me in the head, tweaking my neck forward in a painful jerk. I leaned forward and braced for impact. But I did not get pummeled into the rocks. Instead, I shot out in front of the wave and straightened to the beach as it closed out behind me. To my astonishment, I had made it.

Kicking my board in front of me, I laid back and let the wave’s whitewater pass me. I tumbled and said my goodbye to the wave. It had graced me with an excellent ride. I would go home happy.

I surfed for three more hours before I finally crawled back on shore exhausted. The many waves I had caught were sketchy, some unmakeable, but each was as invigorating as the one before.

A post-surf bliss immediately came over me. I sat on the beach for a few moments, and I contemplated how lucky I was – days like this were rare. My soul smiling, I headed to the car, packed up my things and headed home.

The high lasted a couple hours into my drive. Sublime’s “Santeria” came on through the stereo, then “Vienna” by Billy Joel – two of my favorites. I sang along shamelessly. With music blaring, I tried to mind surf the waves I had caught again. For just a moment I was there – back in the water catching waves. But in an instant it was gone, and so was my high. My emotions shifted to something different. Something more in tune of longing and frustration.

I arrived late in the evening – still frustrated, but glad to be home. I had accepted that for now this was my reality. I can either surf, or not surf at all.

Before bed, I scrolled through all the forecasts. There was another swell lining up next week. Grinning, I wondered if it could possibly be as good as today. I had to find out.    x