Your vantage is different from the sky. With wings, you can kiss volcanic summits and lenticular clouds in a matter of minutes. You can witness a landscape’s patterns – like avalanche crowns concentrated on south-facing slopes, where northerly winds deposited meters of snow; or the consistent elevation of snow line from the most recent storm, wrapping around every mountain in sight along the same band; or the strategic patchwork of clear-cuts across the foothills. You can unearth secret mountain troves: Alpine swimming holes, ski lines, dream campsites. With wings, you can chase the sunset.

Kody Spencer has been discovering secrets from the sky since he was 4 years old – courtesy of his dad’s tutelage, and eventually courtesy of his pilot’s license and the wings of his vintage Cessna. On a sunny day in late December, I had the honor to ride in the passenger seat of Kody’s plane. The motivation? To scope ski lines on some of the peaks surrounding Mt. Baker. An unusual high-pressure spell had led to stable snow conditions in the high alpine, and Kody was scheming ways to fly with his other set of wings (his skis).

Within seconds, we were airborne taking off from Bellingham. With our fingers on the windows, we giddily traced the curves of our favorite backyard bike trails. I could see my house, its roof cloaked by the green canopy. There’d been a rare lowland snowstorm the day prior, and the fresh coating accentuated the topography we flew above. As we ventured farther east, the Nooksack River squiggled beneath us, and the foothills grew taller and more voluminous. We glided past the Twin Sisters Range and I spotted a little cirque we had stumbled upon last summer. It had felt like a secluded cove only known to us on that late summer starry night – nestled in a bowl between the red dunite-rich walls of the South Twin and shadows of the old growth. But up here in the sky, its idyllic locale was no secret. It was so obvious, and all too alluring.

While Kody loves the expansive perspective he gets from flying, he also cherishes the accessibility it offers. One of his most memorable flights is to Stehekin – a roadless village tucked along the shores of Lake Chelan – last summer. Reaching Stehekin normally demands a six-hour journey via car and ferry, but it can be reached in a mere 50 minutes by air. Kody also appreciates the mental challenge. “Including flight planning and execution, risk analysis and decision making, flying requires a lot more focus than most other things I do,” Kody reflects. “There is very little margin for error. In skiing you can push it and crash, in flying you can’t, so you have to be extremely aware with what you are doing and where the line is.”

We ventured east toward Mt. Baker. Concepts I teach in my geology class are starkly apparent from 11,000 feet. The curves of the Nooksack River’s meanders are indeed directly proportional to the channel’s width – a commonly known relationship in the world of fluvial geomorphology. Crevasses do align exactly perpendicular to the glacier’s direction of flow. North-facing slopes hold more snow and house more shade-loving conifers. The foothills – in their parallel north-south trajectory – are relics of the Cordilleran Ice Sheet’s flow some 16,000 years ago.

We rounded the iconic Roman Wall on Mt. Baker and ventured toward Mt. Shuksan and Mt. Larrabee. Beneath us, little skiers dotted the slopes of the Mt. Baker Ski Area – its terrain so strikingly dwarfed by the towering peaks in its vicinity. Kody tilted the wings toward the steep northwest couloir on Shuksan, one of 50 commitment-demanding classic North American ski descents. Like most Cascade couloirs, its ribbon of snow is narrow and bound by metamorphic rocks, delicately perched above cliff bands and amidst crevasses. It looks even more formidable from the sky. It’s on Kody’s bucket list.

Around 4 p.m., the solstice light began to fade. As the sun dipped beneath the horizon, its rays set the Canadian mountains on fire. And then the alpenglow show (for which we had front row seats) made its way south: First, Mt. Larrabee, and then Mt. Sefrit. Like a slow-moving electrical current, the evening’s last light crawled across the range, setting mountains ablaze one by one. To our west, the San Juans were barely visible, bathed in the setting sunlight. It was time to return to the airport.

I have come to know this landscape’s mountain tops, loamy single-track and salty shores on my feet, my skis and my bicycle the past few years. But being in the sky, with wings, gave me new eyes. Perhaps, what was most striking was the interconnectedness of it all – glaciers terminating in rivers, log jams redirecting streamflow, the Nooksack’s path of least resistance toward the sea. If I squeezed my eyes, I could almost see spawning salmon, and the precise elevation where lowland raindrops are replaced by mountain snowflakes.

When Elizabeth Kimberly isn’t teaching geology at WCC, you can find her seeking alpine powder turns, winding through forests on a bicycle or writing in a notebook and drinking kombucha. 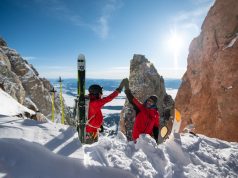