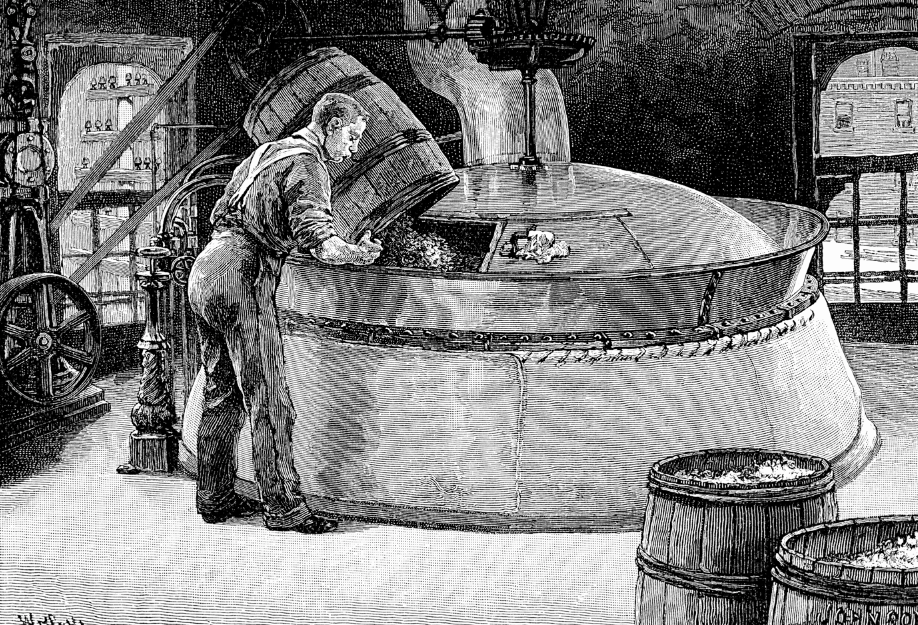 If you can see Mt. Baker, you’re not far from a great brewery, and more are on the way.

It’s hard to believe that just about eight years ago, Bellingham only had one brewery. Since then, the breweries-per-capita ratio has improved quite a bit. The city now has six operating breweries (Boundary Bay, Chuckanut, Wander, Aslan and two Kulshan breweries), and at least six more are in the works. If all goes as planned, by the end of 2016 Bellingham should have at least 12 or 13 operating breweries, plus more in the surrounding cities and many more in nearby British Columbia.

The best part of this growth is that all the breweries offer unique approaches with differing techniques and style interpretations, which only adds to the rich and diverse beer culture of this area.

Founded in 2012 by Bellingham native David Vitt,
Kulshan Brewing CO. is one of the fastest-growing breweries in Whatcom County. Just one year after opening, it doubled the size of its brewhouse to 15 barrels (a barrel is 252 pints). and added fermenters in order to keep up with demand. Then, earlier this year, it opened a second brewery on Kentucky Street in Bellingham, which features a 30-barrel brewhouse and a spacious, beautifully handcrafted taproom. Kulshan’s Kentucky Street facility will mainly produce the brewery’s flagship beers, such as Bastard Kat IPA, Good Ol’ Boy Pale Ale and Red Cap Irish Red Ale, which will allow the James Street facility to create more seasonal, specialty and experimental beers.

Now that Wander Brewing has its new tanks online, it has been able to grow its accounts southward to the Seattle area. Over the summer, it continued with many more barrel-aged releases in 750 ml bottles, including some sour and farmhouse ales. “The Wander Barrel Project is ever expanding and we recently added two puncheons to the lineup, which are aging beer on local golden raspberries and boysenberries,” said Wander co-owner Chad Kuehl. “In total, we now have around 80 wooden barrels aging all sorts of Wander beers.”

Aslan Brewing Co., Washington’s only certified organic brewery, is progressing forward nicely. In the summer, it canned its first beer, Batch 15 IPA, and soon thereafter maxed out its capacity. The two brand-new, 45-barrel fermenters it recently installed will certainly help the brewery keep up with demand, but the question is, for how long? Meanwhile, the brewery has been producing some rather delicious and interesting beers, such as FIFA (French India Farmhouse Ale), which won a gold medal at this year’s North American Beer Awards.

Chuckanut Brewery continues to crank out some of the best European-style ales and lagers this side of the Atlantic. It also continues to rack up awards for those beers, including a whopping four medals at this year’s North American Beer Awards and four medals at the Washington Beer Awards. Ever since opening in 2008, Chuckanut has struggled to keep up with demand, especially for its multi-award-winning Pilsner, so it is now working on building a second, 20-barrel production brewery in Skagit County. Chuckanut Brewery & Kitchen in Bellingham will remain open, and will continue to produce beers on the smaller system. When the second Chuckanut brewery opens, hopefully sometime in spring 2016, expect it to be nothing less than amazing. After all, Chuckanut co-owner Will Kemper has helped to build countless breweries around the world.

Boundary Bay Brewery, by far the oldest brewery in Bellingham, continues to expand and garner accolades. In 2015, Boundary Bay won three medals at the North American Beer Awards and one medal at the Washington Beer Awards, and it was recently named Washington’s Small Philanthropic Business of the Year for its dedication to the local community and charities.

Even with all the other breweries opening in Bellingham, production at Boundary Bay hasn’t peaked. In fact, in 2014 it added three 60-barrel fermenters, and it intends to expand its barrel-aging program and distribution. In addition, Boundary Bay is still one of the highest-producing brewpubs around. According to the New Brewer Industry Review, Boundary Bay is the largest single onsite brewpub in Washington and the 10th largest in the nation. One-third of its beer is sold on the premises. A huge 20th anniversary party is set for Wednesday, September 16.

Eighteen years strong, The North Fork Brewery in Deming may be small, but the number of beers it produces is ever expanding. “We are happy to stay small,” said North Fork co-owner Vicki Savage. “Our size allows us to take more risks and take on more styles of beer.” Eric Jorgensen, The North Fork’s brewer, recently began bottling some of his specialties in 750 ml bottles, and more barrel-aged sours and wild styles will be released in the future. Be on the lookout for The North Fork’s first bottled sour ale, a framboise that’s a blend of three sour ales aged on raspberries in a red wine barrel, which may be released by the time this article is published.

Earlier this year, Menace Brewing doubled its production capacity with its four-barrel brewhouse in Ferndale. “We have been working on our flagships and perfecting them batch by batch,” co-owner Ben Buccarelli said. “We’re also trying to do some unique one-offs. Plus we just did a gose-style beer with the Bellingham Beer Lab, and we’re very excited about that one.” Menace beers can be found at select beer bars and restaurants, and some are always on tap at the brewery’s beer bar in Bellingham, The Local Public House. “Ultimately, we would like to move Menace out of our current location and into Bellingham,” Buccarelli says. In early 2016, Menace will also provide guidance to the Bellingham Beer Lab’s brewery (see below).

The Local Public House (created by the owners of Menace Brewing) recently announced that it will be expanding into the unit next door, which will become a second taproom called The Annex. The Annex will be home to the Bellingham Beer Lab (BBL), which will feature a one-barrel brewhouse. BBL will become the first non-profit brewery in Washington. Essentially, the BBL will have five member brewers – four volunteer brewers who have already been selected and volunteer home brewers from the Bellingham Homebrewers Guild acting as the fifth member.

BBL will operate under the guidance of Menace Brewing, but it will be its own independent organization. Five of the 20 taps at The Annex will be reserved for BBL beers, and all proceeds from BBL beer sales will go toward local charities. The Local hopes to have The Annex open by the end of this year and the BBL brewery running by the beginning of 2016. Expect many interesting beers from this brewery, but you’ll have to visit often because they won’t last long. “We want to cycle through as many home brewers as we can,” Buccarelli said, “and this smaller system allows for that.”

Structures Brewing owners James Alexander and Ryan Miller have both worked at numerous breweries across the country, but now they’re excited to open their own brewery in Bellingham. “Our mission is to design quality, vibrant and balanced beer, while working with mixed fermentations to create innovative beer for the future,” they said. “Quality is what motivates us, and creativity inspires us.” Early 2016, look forward to a cozy taproom serving small-batch beers. They plan to brew a variety of styles, including IPAs, saisons, stouts and pale ales, plus some mixed-fermentation and barrel-aged beers.

Tucked away in a residential area at the edge of historic Fairhaven, Stones Throw Brewing is “just a stone’s throw away from adventure,” as owners Jack Pflueger and Tony Luciano like to say. On completion, their unique brewery, which was constructed with shipping containers, will offer a relaxed, neighborhood atmosphere. Visitors will have the choice of hanging out in four areas – an indoor area, a beer garden in the front, a fire-pit area out back and an upper-level patio on top. Using an eight-barrel system, they plan to brew a lineup of five or six easy-drinking beers, such as pale ales, porters, IPAs and the like, plus at least two or three seasonal beers and specialties at any given time. They will also have a non-alcoholic, house-made ginger ale. Construction setbacks have delayed Stones Throw’s opening, but they hope to have it open by late fall.

Bill Kimmerly, co-owner of Masquerade Wine Co. in Bellingham and an experienced chemist, winemaker and home brewer, hopes to open Illuminati Brewing late this year. The seven-barrel brewhouse will be combined with his winery and a restaurant – all under one roof. “Initial beers will be a traditional English bitter, a pale ale, a golden ale and an IPA,” Kimmerly said. “I also plan to leverage the winery’s capability with barrels to bring on some sours and other barrel-aged beers.”

At the confluence of Bellingham’s Columbia, Cornwall and Lettered Streets neighborhoods, Subdued Brewing has the potential to become one of the finest neighborhood brewpubs in the Pacific Northwest. Co-owners Chris McClanahan and Dave Morales both have extensive brewing experience (Morales has brewed professionally), and if you ever had a chance to try some of their beers at one of the Sunnyland Stomps, you know they’re a couple of rather talented brewers.

“Starting out, we’re going to focus on four or five beers,” McClanahan said. “Once we get those dialed in, we’ll look into doing other styles. Eventually, we plan to do a series of saisons with unique ingredients.” As far as their brewpub goes, which will hopefully open late summer or early fall of 2016, they want it to be a relaxed, inviting, community-focused gathering spot. Think comfortable seating, no TVs and no live music – a place that’s conducive to conversation. And drinking delicious beer, of course.

Blaine just might get its first brewery this year. Over the past nine months, Josh Smith has been doing all sorts of planning and permitting for his production brewery named Atwood Ales. Recently, he has
begun updating the 100-year-old barn on his farm in Blaine. “We will produce a variety of ales, many in the spirit of the French and Belgian farmhouse ales that helped to inspire my passion for brewing,” he said. “The surrounding acreage also provides countless opportunities to directly incorporate agricultural and natural ingredients into our small-batch beers.” Smith hopes to be producing beer later this fall, which will be available at select local outlets.

North of the border

Lockstep with Washington state, British Columbia continues to explode with breweries. Since 2012, when there were only about 45 breweries in the province, the number has more than doubled. In 2014 alone, 21 new breweries opened. By the end of 2015, B.C. should have more than 100 breweries.

Joe Wiebe, one of Canada’s leading beer writers and author of the best-selling book, “Craft Beer Revolution: The insider’s guide to B.C. breweries,” says this huge boom came about for a variety of reasons, but one of the major contributing factors was a provincial law change in 2013 that allowed breweries to open tasting lounges within their own buildings.

“Visiting the exciting beer scene in the Vancouver area is easy for folks from the Bellingham area,” Wiebe said. “Four Winds Brewing, which opened in 2013, is just off the highway in Delta, with a tasting lounge and a growler-filling station.” Four Winds was just named Canadian Brewery of the Year at the 2015 Canadian Brewing Awards.

Wiebe says much of B.C.’s brewery growth has occurred in and around Vancouver where no new breweries had opened between 1998 and 2012. But in the past three years, 14 new breweries have opened in the city alone, plus another dozen in its immediate suburbs.

“Victoria, the provincial capital, is another great destination for Bellingham-area beer lovers, whether via the Anacortes ferry or from Tsawwassen just north of the border,” Wiebe said. “The small, touristy city is home to Spinnakers Gastro Brewpub, which was Canada’s first brewpub in 1984 and is still going strong today, along with a dozen other breweries and brewpubs, plus a diverse restaurant and tap house scene.” Visit in early September for the Great Canadian Beer Festival or in March for Victoria
Beer Week.   x