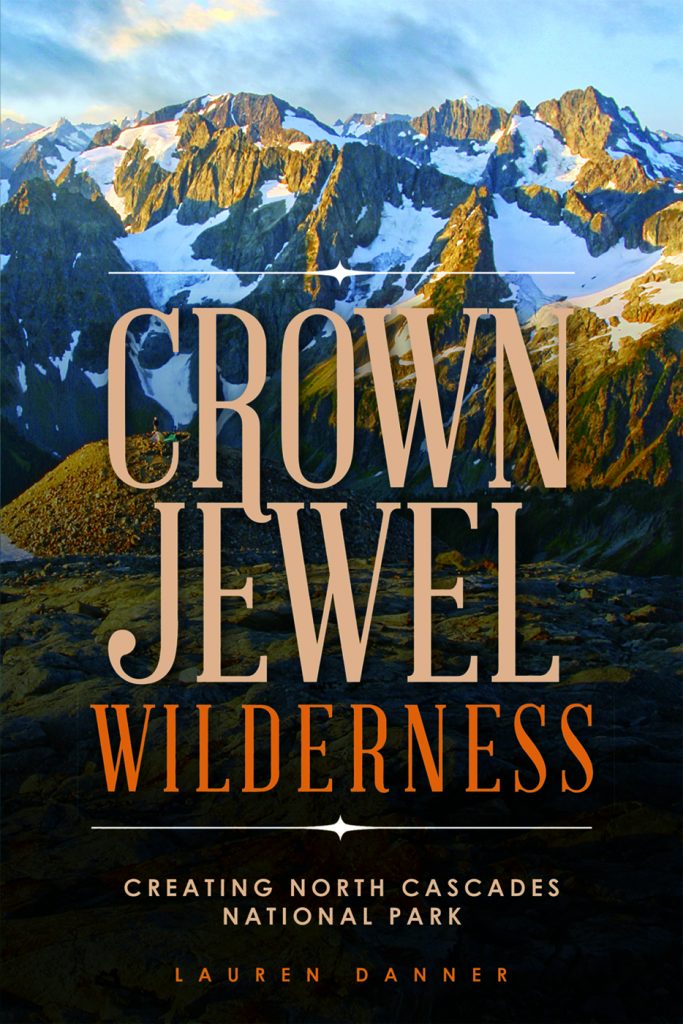 North Cascades National Park is unlike any national park that came before it. Its advocates wanted to preserve it as it was, rather than creating a “virtual outdoor Disneyland, overrun by wrapper-scattering, bottle-tossing sightseers who would quickly change the wilderness atmosphere into that of a Christmas-tree sales lot,” as one source in Lauren Danner’s book “Crown Jewel Wilderness: Creating North Cascades National
Park,” describes.

The story Danner unearthed is a look into the beginning of modern environmentalism and a reminder that North Cascades National Park exists because people decided it should, and people will determine its future. – Oliver Lazenby

Studying a map of the North Cascades today is tantamount to viewing politics at work. Every boundary line, each turn up a valley or flow along a creek or jog around a ridge, represents a political decision. Many of the complex’s borders are based on work done by forester Dick “Bush” Buscher, who

spent weeks surveying the backcountry to develop the Forest Service’s proposals. Senator Jackson used Bush’s work to draw the boundaries in the Senate park bill. There may be no better indicator of the political nature of the park than this one fact: the Forest Service drew the boundaries of North Cascades National Park. From the summit of McGregor Mountain in the southern unit of the park, one looks south down the beautiful Stehekin River valley or north toward Bridge Creek. The views in every direction are stunning, breathtaking. The scenery does not care about its land use designation. Nonetheless, standing on McGregor’s summit, one perches on a carefully negotiated political line. One foot is in a national park, the other in a national recreation area. Climbers literally straddle a compromise.

While the park boundaries reflect meticulous political craftsmanship, the attainment of the park can be credited to savvy strategizing by conservationists during a time when the conservation movement was transforming into modern environmentalism. All across the country in the 1950s, people began to question the unchecked resource exploitation that characterized the postwar era. In the Pacific Northwest, that questioning focused on logging the national forests at a time when the roles of federal public lands agencies became increasingly complex. Where the Forest Service had been a mostly custodial agency, the 1950s brought increased demand for two conflicting uses, national forest timber and recreation. Where previously the National Park Service had been able to balance preserving scenery with providing access, the 1950s brought an onslaught of visitors that strained the parks in unanticipated ways, causing many to question the agency’s commitment to preservation. Despite their distaste for the Park Service’s orientation toward recreational development, wilderness advocates, an admittedly small group at the beginning of the controversy, knew they would have a better chance for protection with a national park, because they had tried to work with the Forest Service and gotten nowhere. The North Cascades became the “ultimate showdown that convinced citizen conservationists that the Forest Service could not be trusted to preserve wilderness.”

When Mike McCloskey was hired as Pacific Northwest Conservation Representative in 1961, the North Cascades was one of several wilderness preservation issues in the region. Logging in Three Sisters Wilderness, creating an Oregon Cascades national park, preserving Washington’s Alpine Lakes region, and protecting the Oregon Dunes competed for attention. After consulting with David Brower, Patrick Goldsworthy, and others, McCloskey thought the North Cascades offered the best chance to achieve permanent protection, for several reasons.

First, the North Cascades had a higher proportion of high mountain scenery to lowland forests. The ratio was flipped in Oregon, where there was a lot of forest compared to the amount of alpine scenery. Private timber concerns in Washington State were not as dependent on national forest lands as they were in Oregon and elsewhere in the West, because ownership was roughly equal among private industry, the state, and the Forest Service. The timber industry cared intensely about the disposition of forests in Oregon and on the Olympic Peninsula because trees there were low-lying and easily accessible. Comparatively speaking, the rock and ice of the North Cascades, set off by its steep timbered valleys, gave the region the crown jewel quality that was politically more appealing.

The North Cascades are the beneficiaries of the efforts of thousands who believed them worth preserving.

Second, during and after World War II, Washington State’s population boomed with people who came for good jobs and stayed for the beautiful natural environs, easily reachable by car. Seattle became the nexus of a powerful, sophisticated urban constituency who cared deeply about wilderness preservation.

Third, because the area’s economy had diversified away from timber dominance, it was politically feasible for Senator Jackson to take a position that displeased the timber industry, although he was careful to address park opponents’ concerns during the legislative process. The fact Jackson was one of the most powerful politicians in the country boded well for passing legislation, because he would only support a park effort if he was confident he could get a bill passed.

For McCloskey, the campaign to create the park was like flying a plane. First it had to get off the ground by attracting support to achieve political plausibility, then remain airborne by maintaining interest and persuading politicians to get involved, and finally land safely by ceding control to those able to accomplish the final goal. The success of the North Cascades campaign, which attracted national media attention and led to political action by two presidents, cabinet secretaries, legislators, and state officials, meant its proponents had to relinquish control and accept a national park that did not fully satisfy their objectives. With strong leadership by the N3C and Sierra Club, conservationists working to preserve the North Cascades handled each stage with professionalism. Their willingness to compromise, when it became clear that was the only route to getting a park, helped make the park a reality. The North Cascades controversy exemplifies conservationists’ embrace of politics as an avenue for achieving environmental goals in midcentury America.

North Cascades National Park has been aptly described as one of the postwar environmental movement’s “leading accomplishments” and “a flagship park for wilderness protection.” The Wilderness Act of 1964 influenced the design and intent of North Cascades National Park in novel ways. In addition to preserving monumental scenery, a baseline requirement for traditional national parks, this park would preserve vast swaths of wilderness. The alpine ruggedness that protected de facto the region from major inroads for resource development became the primary rationale for creating the park. Its scenery was unquestionably of national significance, and it had been left alone, thanks to its physical inaccessibility and mostly hands-off management by the Forest Service. The scenery was not going away. The question was how best to protect it. The answer was to create a crown jewel park that prioritized wilderness preservation.

Nearly a half-century after the park’s creation, concepts of wilderness, scenic preservation, and public access have shifted. As the national parks and forests try to accommodate record crowds without adequate funding, some have called for a modern-day Mission 66 [a program to dramatically expand visitor services at National Parks by 1966] to clear the multi-billion-dollar backlog of maintenance and repairs that plagues the national park system. Others believe access to the crown jewel parks may eventually be rationed, with would-be visitors entering a lottery or purchasing entry tickets in advance.

Those who venture to the North Cascades do not typically have to deal with long lines at entry stations, crowded trails, campsite shortages, inadequate parking, uncollected garbage, or packed visitor facilities. At the time of this writing, nearly all of the 1.3 million acres of land proposed for a national park and mountain recreation area in the N3C’s 1963 Prospectus are statutorily protected, preserving diverse environments that range from lushly forested river valleys to some of the most spectacular alpine scenery in the world. To the hiker standing on a high ridge in the Picket Range or auto tourist gazing at Diablo Lake’s milky turquoise waters, the politics that raged around the fate of this alpine wonderland can feel very far away. But maps show the reality. The North Cascades are the beneficiaries of the efforts of thousands who believed them worth preserving. The jaw-droppingly magnificent North Cascades endure as one of the largest, wildest tracts in the continental United States, a crown jewel wilderness to treasure forever.

When she’s not out hiking on our public lands, Lauren Danner writes about Pacific Northwest and environmental history, outdoor recreation, and public lands policy from her home in Olympia, Washington.