Days of My Youth Premiere

We premiered the ski movie Days of My Youth by Matchstick Productions and Red Bull Media House at Aslan Brewing Co. November 7, and it went off with a packed crowd and an excellent show. Through raffle ticket sales, merchandise sales and donations, we raised $2,567 for Northwest Weather and Avalanche Center (NWAC) and Snohomish County Helicopter Rescue Team (HRT).

The film was extremely well received. It follows a cohesive storyline and really builds to a climax with incredible skiing throughout and a feel-good ending.

A favorite scene for many was definitely Cody Townsend’s insane straightline through a long, steep couloir that is so tight he probably could have brushed his fingertips on either side. This line won Townsend “Best Single Shot” at this year’s IF3 Movie Awards, and helped him earn the coveted “Best Male Freeride Segment.” Michelle Parker really stood out in the film as well, charging burly, technical lines with her fun-loving personality on display.

From the start of the film to the end, there was no shortage of hoots, hollers and cheers from the standing-room-only crowd. We would expect no less from MSP and Red Bull.

Skevik Skis came all the way from Vernon, BC to show off their handcrafted skis and raffle off a pair of Loken 116’s. With beautiful graphics from local artists, exposed maple sidewalls and light-yet-strong construction, the skis look like serious powder weapons, and were a big hit at the show.

American Alpine Institute generously donated an AAIRE Level I Avalanche Class to the raffle. 4FRNT came in late with a huge donation – a gorgeous pair of freestyle skis and poles. Backcountry Access donated two pairs of their BC Link backcountry radios. LibTech hooked us up with a Skate Banana snowboard with Magne-Traction. Mountain Safety Research gave us a great pair of snowshoes and two snow saws. G3 Genuine Guide Gear donated a set of super-high quality Alpinist climbing skins as well as a few hats and stickers. Helly Hansen sent an awesome ski boot bag and a warm winter jacket. Panda Poles sent a pair of their bamboo poles made by powderhounds and mountain mystics in the Wasatch Range of Utah. Backcountry Essentials, Bellingham’s source for all mountain adventure equipment and the go-to ski repair shop, donated several free ski tuneups as well as a bucket full of swag from K2, Tecnica, Blizzard and Outdoor Research – all of which we tossed out to the crowd while standing on the bar. Vital Climbing Gym, the local hangout for Bellingham mountain folk, donated a 10-punch pass. Mountaineers Books donated a stack of great books to spread awareness and backcountry acumen: Backcountry Ski and Snowboard Routes of Washington by Martin Volken, Avalanche Essentials: A Step-by-Step System for Safety and Survival by Bruce Tremper and ABCs of Avalanche Safety, 3rd Edition by Sue Ferguson and Ed LaChappelle.

Photographers Grant Gunderson, Jason Hummel and Rylan Schoen donated prints to the silent auction, and three people walked away with impressive works of art to hang on their walls. 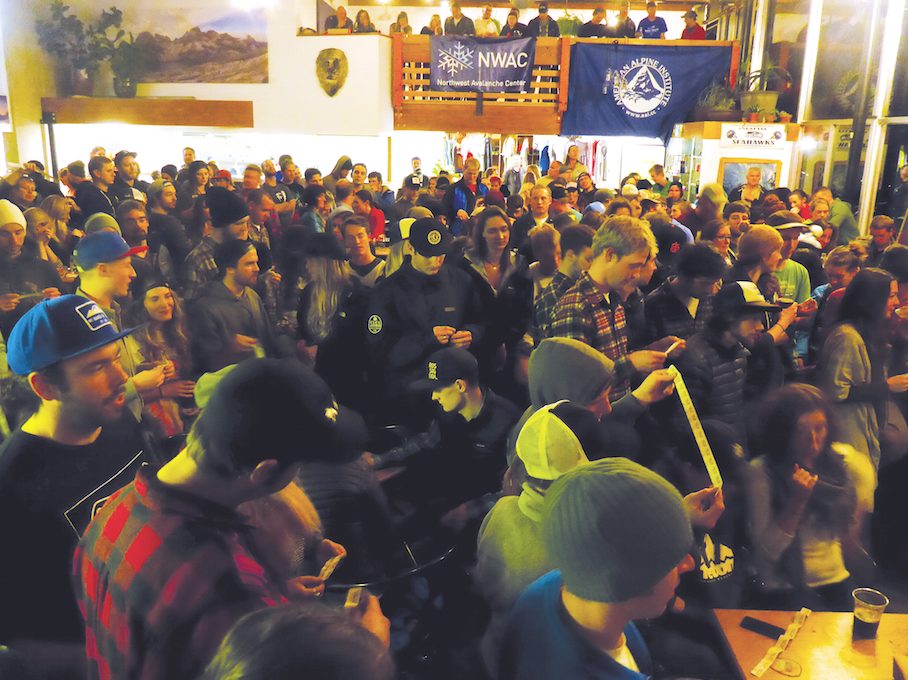 Big thanks to Aslan for hosting and donating beer, sponsors for donating, and everyone for coming out and making the event a huge success! – MBE 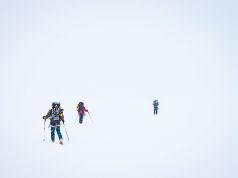