Developing the Shuksan Crag off the Mt. Baker Highway for drytooling

I’ve been ice climbing on and off for a long time, but over the last few years it’s mostly been off. I get some days seracing on the glacier every year, and climb the north ridge of Baker at least every other year, but even though I co-authored the Washington Ice Guide with Alex Krawarik, it’s been a while since I’ve really focused on ice climbing.

This winter I decided to re-dedicate myself to the art of climbing waterfall ice. I was excited to get out there and swing my tools, and I couldn’t wait for it to get cold and to stop raining. But as most of you know, it never got very cold and it never really stopped raining.
It’s been a warm and miserable season in the mountains. Even my old stalwart, Pan Dome Falls at Mt. Baker Ski Area, a climb that is normally in decent shape, has been in poor condition.

So I decided to change my focus. I knew if I was going to get any climbing in locally this season, I’d have to explore the world of drytooling.

Drytooling is the art of ice climbing without ice. In other words, a climber puts on crampons, grabs ice tools and then scratches his way up steep rock faces that have little to no ice on them at all. It’s a ludicrous activity, but it’s also really fun!

Once I made this decision I needed two things. First, I needed partners; and second, I needed a steep, chossy rock face that no one was particularly interested in climbing in rock shoes.

Both things proved easy to come by. A number of my friends were interested, and we found the perfect crag on Hannegan Road only a few feet from the road. The Shuksan crag is an easily accessible cliff face a few minutes up Hannegan Road off the Mt. Baker Highway. There are two bolted lines on the face. Most of the bolts are bad and many of them are covered in moss. It was a perfect place to “redevelop” for drytooling.

The thing about this particular sport is that it’s not easy. We set up top ropes on the crag and began to work out moves with ice tools and crampons. Drytooling is similar to both rock climbing and ice climbing, but still different enough that it’s not intuitive. This is compounded by the fact that the routes are steep and incredibly pumpy.

The difficulty of drytooling stems from the need to place the pick of the ice tool and crampon points with extreme precision. It’s not uncommon for the potential tool or crampon placement to be something you would never dream of using in a rock climbing setting. A tiny slot you could barely put a dime into can be an absolutely bomber hold. It’s amazing.

It’s also amazingly hard on forearm muscles. Every move requires that you place a tool, crank up on it and then lock off with a bent arm. While locked off, you scratch around with the other tool to find a placement. In some cases a placement is a simple divot that you place your pick on. In other cases, you slide your pick into a crack and crank back on it, torqueing to keep it in place. Or you might slide the entire shaft of the tool into a crack and hang from it like a kid on monkey bars.

Occasionally a tool placement isn’t good. And when a tool pops, it’s often unexpected. As you’re cranking down on the handle, suddenly the pick slips off its placement and the tool kicks back toward your face. So far the hammer on the backside of the tool hasn’t hit anybody on our trips yet, but we’ve had a few close calls.

By the end of the first day, we were all pumped silly. It became clear that to drytool well, I would have to train. Slowly I got stronger. Every time I went out to the crag I climbed more effectively, and as I got stronger, it became more fun.

Over the next two months, I returned to the Shuksan crag a number of times. We developed four additional routes in the area: two beginner routes and two intermediate lines. Although many of the routes are still a bit dirty, the crag is slowly cleaning up. It will only be a short time before the bulk of the dirt and the moss has been removed simply by the number of people experimenting with the sport on this friendly crag.

Drytooling is an intense and engaging sport. It’s one of the few types of climbing that haven’t seen dramatic development in Washington state. With the introduction of easily accessible drytooling areas like Shuksan crag, perhaps that will change.

To get to the Shuksan crag, drive up the Mt. Baker Highway (SR 542) to Glacier. Drive another 13.3 miles and turn left onto the unpaved Hannegan Pass Road just before crossing the Nooksack River near Milepost 46. If you drive over the river and past the campground, you have gone too far. Once on the Hannegan Pass Road, drive for two minutes to the crag on the left.

Four routes are set up on the main wall, and currently they all need to be top roped. Bolts on this wall should be treated as suspect until they are replaced.

To set up a top rope, scramble around to the right. Be wary of icy, wet or exposed areas when setting up top ropes. 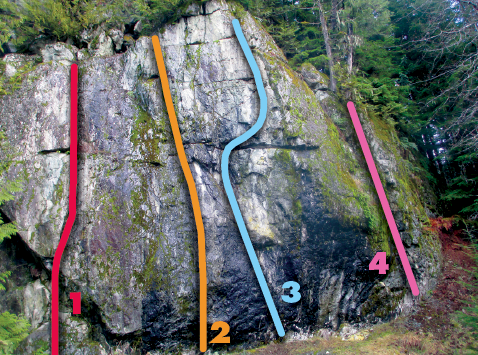 1) The crack – M5+  The left-most climb works its way through a small overhang up to a ledge and then finishes in a corner. To set up the top rope, use the fir tree directly above the route. A “set-up rope” that extends the anchor down over the route will make this an easier line to manage.

2) Tricky start – M6+  This bolted route has a very tricky and pumpy start. The difficulty of the route eases as you get higher. There are OK bolts above this climb. You may wish to obtain a belay in order to get into position to set up the route. Don’t use the ancient angle bolt found above the climb in the moss.

3) Pumporama – M7  This is the hardest bolted line in the area. Climb up the angling crack to the horizontal face. If you have any strength left at all, continue up to the top. There are three bolts above this climb that can only be accessed from above by rappelling. The bolts are old, so you should equalize them all together.

4) Katie’s corner – M5  This mossy corner is a fun line that is a bit easier than the others. The movement is much less powerful, but the body positions are less intuitive. The use of a “set-up rope” will make it easier to manage the top rope in this area.

5) Beginner’s route – M4  This route is not on the main Shuksan crag; instead it is back toward Highway 542. Walk to the yellow “stop ahead” sign and then bushwack straight into the woods. You’ll see a short crag. There are two potential lines here that cross one another. If you start on the left, a pumpy move leads to less pumpy moves. If you start on the right, easier climbing leads to thinner climbing. The easiest line starts right and works up left. The hardest line starts left and works up right. This wall has been cleaned up a lot, but is still a bit muddy. As it sees more mixed traffic, it should clean up more. Walk around to the right to set-up a toprope. A “set-up rope” will make it much easier to access the top of this crag.

Note: A “set-up rope” is usually a short static line that can be used to facilitate
top-roping. To learn more, check out Toproping by Bob Gaines or The AMGA Single Pitch Manual by Bob Gaines and Jason D. Martin.  x 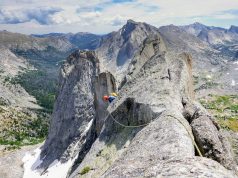 Cirque of the Towers