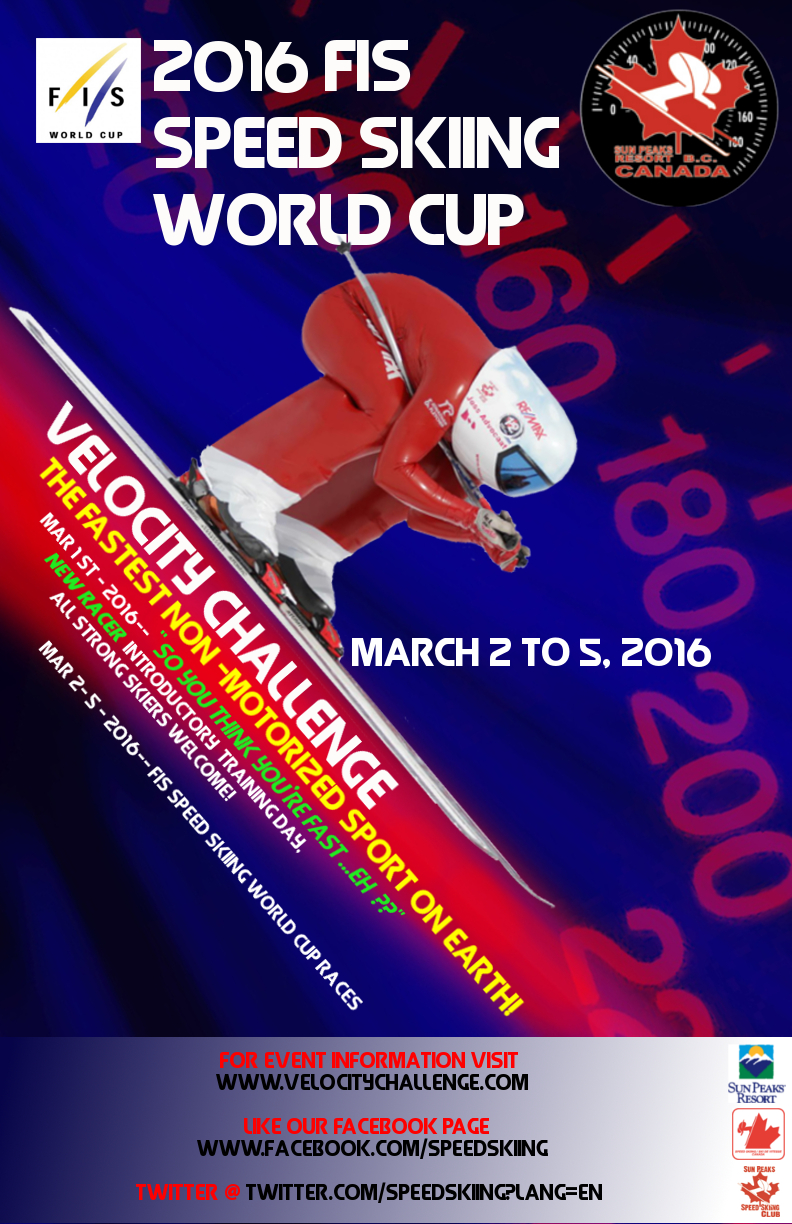 For over a decade the Sun Peaks Velocity Challenge & FIS Speed Ski World Cup has held the distinction of being the only speed skiing event held in North America and of being one of the longest running speed skiing events in the world.

Started back in the mid-1980’s by a group of local Tod Mountain speed demons, this event brings the world’s best speed ski athletes from up to 10 countries to Sun Peaks Resort each spring. Renowned for its crazy rolls and sheer drop, the Headwalls Speed Track is one of the most difficult tracks on the FIS Speed Ski World Cup tour, challenging the world’s fastest skiers as they accelerate from 0 to 175 km/h in a mere 8 seconds. The jet engine sound of speed skiers flying past at over 160 km/h must be witnessed first hand and you can only do that March 1-5 at Sun Peaks Resort.

NEW this year “So You Think You’re Fast, eh?” First time speed skiers will get the opportunity to experience speed skiing in a low pressure pre-race training day event where they will get the chance to start at the low and mid starting points of the course to test their mettle against the track and get free pointers from the world’s best before deciding on registering for the main FIS World Cup Speed Skiing event in the following days. Limited rentals are available, please contact McSporties ski shop in Sun Peaks, www.mcsporties.com

Speed ski racing will be in progress daily from Wednesday, March 2 to Saturday, March 5, between 10:00am and 3:00pm (weather depending) on the Headwalls Speed Ski Track:

Wednesday: World Cup training day; racers will start at the track’s 1/2 way mark, above tree island, and move up the run as the day progresses.

Thursday: World Cup Race #1; racers will use their three runs of the day to clock their fastest speed in hopes of a World Cup podium finish.

Friday: World Cup Race #2; racers will use their three runs of the day to clock their fastest speed in hopes of a World Cup podium finish.

Saturday: World Cup spare day/’Velocity Challenge’; if both World Cup events are completed as scheduled, organizers will shorten the timing trap from 100 metres to 25metres and try to break the course record of 178.22km/h held by Sun Peaks local Kenny Dale.

Spectators on skis or boards can best view the event from skier’s right of the Headwalls track near the bottom, across from Lunchtime run – this is where racers will be going the fastest!