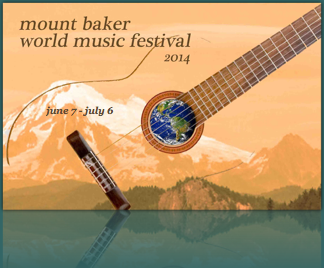 Incredible musicians from around the world share live music, with proceeds helping supporting education in the Mt. Baker foothills communities.

Niyaz featuring Azam Ali Described by the Huffington Post as “an evolutionary force in contemporary Middle Eastern music”, Niyaz first stepped onto the world stage in 2005 with their infectious self-titled debut album appearing at #1 on iTunes. Critics declared the album to be one of the most ground breaking of its time. A worldwide tour followed and quickly established Niyaz as a stand out ensemble in a very crowded world music field. By seamlessly blending medieval Sufi poetry and folk songs from their native Iran and its surrounding countries in the Persian and Arabian Gulf, with rich acoustic instrumentation and modern electronics, Niyaz has created a 21st century global trance tradition and proven to be a group with a distinctive voice of their own, amply deserving of the success they have garnered worldwide