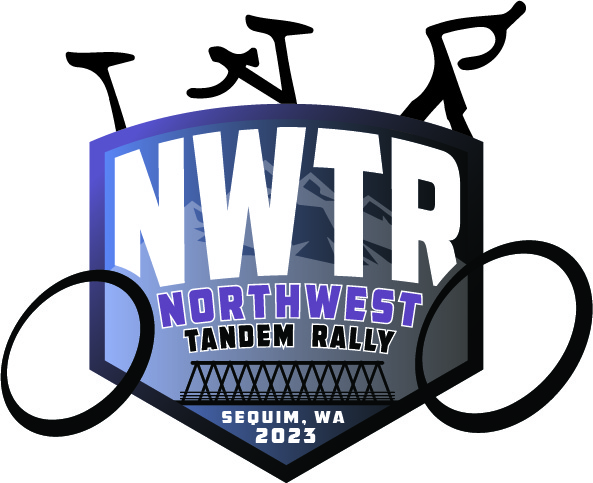 Since 1986, the Northwest Tandem Rally (NWTR) has been bringing you premiere destination rides throughout Washington, Idaho, Oregon and B.C. Drawing hundreds of tandem teams from around the nation, the rally is hosted in a new city or town venue each year and is organized by local cycling clubs or related non-profit organizations. The NWTR exists to bring together tandem bicycle enthusiasts once a year to promote bicycle tourism, camaraderie, and to raise funds for bicycle infrastructure and awareness.

The 2023 Northwest Tandem Rally will take place in Sequim, Washington, and is brought to by Peninsula Trails Coalition, with support from Peninsula Adventure Sports, Sequim-Dungeness Valley Chamber of Commerce and the City of Sequim. Peninsula Trails Coalition is the primary benefactor of NWTR 2023, with any rally proceeds used to support the maintenance and construction of the Olympic Discovery Trail.

The routes will have a lot of diversity and will include rural country riding, rest stops at small family farms or other fun and scenic locations, and a full tour of the Olympic Discovery Trail, an amazing non-motorized paved trail that will eventually cross the entire Olympic Peninsula. Some rides will go farther and climb higher into the hills, some will go close to the water with views of the Strait of Juan de Fuca. Some will do both. You will see the iconic rivers of the Olympic Peninsula and you will have Olympic National Park at your ready.

The Sequim Rally will include two days of self-supported riding, two days of supported rides with routes in a variety of distances, a vendor expo fair, beer garden, Saturday picnic, Saturday night UN-banquet dinner and party, and an optional add-on picnic on Sunday after your ride. We are working on some other fun things as well.