Story and photos By Jason Griffith

When we reached our destination we’d been on the go since before first light, trying to beat the forecasted afternoon warmth that could activate avalanche chutes along our route. We had skied across a large lake, up a narrow valley and across several miles of icefield. If we were in the Cascades, it would be time to dig a platform, pitch a tent and start melting snow.

But we weren’t in the Cascades. We were arriving at the Peyto Hut in the Canadian Rockies, after the first of six days skiing along the British Columbia and Alberta border, just northwest of Lake Louise. As the sun arced west, we kicked our boots off and sat on the deck hydrating, looking across the expanse of the Wapta Icefield and making plans for the next day’s summits. We could get used to this!

Known as the Wapta Traverse, the 28-mile route weaves along the Continental Divide, starting at Peyto Lake in Banff National Park and finishing at the Trans-Canada Highway in Yoho National Park. The route is mostly on the glaciers of the Wapta and Waputik Icefields at elevations over 8,000 feet. The Alpine Club of Canada maintains four huts on the route, spaced about a 4- to 6-hour ski apart, that can be reserved months in advance ($30 Canadian for ACC members).

Each hut has its own character, from the unheated, one-room Scott Duncan to the sprawling Bow hut with two wood stoves and an attached outhouse. They’re all insulated and equipped with mattresses, propane lights and stoves, and everything you need to cook and eat. This means a weeklong ski trip can be done with a pack the size you’d typically take on a summer weekend climb in the Cascades.

An efficient team blessed by good weather could complete the Wapta in four comfortable days. We budgeted seven, mainly to allow for bad weather, since the Wapta is known for changing conditions and strong storms. Our group’s previous experience along the traverse indicated that we’d be lucky to climb half of what we wanted to, and the avalanche forecast wasn’t exactly favorable. On long, committing trips like the Wapta, with avalanche, glacier and terrain hazards, watching conditions and being flexible is paramount. Coming out earlier or in a different location than planned can make the difference between a good or very bad outcome.

But first we had some logistics to work out. The Peyto Lake trailhead is a 10- or 11-hour drive from the north Puget Sound, and the traverse’s exit is about 35 road miles from the start. For most, this means staying somewhere near Lake Louise the night before the traverse (Hosteling International’s Lake Louise Alpine Centre is simple and affordable) and leaving a vehicle at the exit.

Those details out of the way, our group of five Skagitonians started from the shoulder of Highway 93 early on April 17, armed with the knowledge that a heat wave was about to crash upon the Wapta. This presented a different avalanche problem than we were anticipating – loose, wet avalanches – but meant that it could be mitigated with early starts and stops.

The snow was melting out at lower elevations and we had to take skis on and off several times as we worked our way from the frozen lake to the terminal moraine leading to the Wapta Icefield. The beautiful weather made for pleasant travel, allowing ample time to admire the expansive valleys, extensive glaciation, and layered geology for which the Canadian Rockies are known. We were a bit nervous about the last day of the traverse, but we pushed that to the back of our minds and enjoyed our arrival to the high alpine.

Day two dawned clear and bright and we were up before the sun to ski over to Mount Baker (yes, they have one too!), hoping to get up and down before the snow softened dangerously. As we kicked steps up the steep and exposed ridge line, the Rockies stretched out far to the north and south. To the west, the Interior ranges of British Columbia faded into the blue haze of distance, all wearing a thick mantle of snow and ice. There were more peaks than most of us had ever seen from one mountain, and few that we could name. As we crested the summit we were faced with Mount Balfour (10,735′), the highest peak on the Waputik icefield and the elusive prize of the traverse. Would the weather hold for a few more days?

We returned to our skis near Baker and descended back to the icefield on softening corn. The day was not yet hot and we felt that we had time to skin up the north ridge of Mount Habel, which would put us in position for a nice fall line descent back to the Peyto hut in the early afternoon. The exposed ridge treated us to more impressive views, including our tracks on Baker and, miles away, a handful of other parties looking like dots as they traveled along the skin track.

Back at the hut we had ample time to rest, dry our boots, and eat as much as we possibly could (lighten the packs, eh?). Hut life, without most of the electronic distractions that clutter our modern lives, allows for the sort of deep and free flowing conversations that don’t often happen. The mountains are good at stripping away class or social barriers; everyone has paid the same price to sit around the table together and there’s a sense of camaraderie that you don’t get when you bump into someone at a dinner party. Mix in a few total strangers, perhaps a bit of whiskey, and you tend to find out some surprising things about each other and the world, especially if your hut mates happen to be emergency room nurses!

The perfect weather continued and days three, four and five were a repeat of our second day, with the exception that we slept in a different hut each night. Along the way we climbed Rhonnda (10,000′), St. Nicholas (9,639′), Mt. Olive (10,270′) and even Mount Balfour – all moderately steep (to 45 degrees) snow climbs with glacier travel. On the ascent of Balfour, a hut-sized serac collapsed and thundered down behind us just as we were clearing the icefall below the Balfour high col. Whew! We saw first-hand why the climb to the col is not to be underestimated, especially in poor weather. It’s been the site of several deaths and serious accidents. Thankfully our descent from the summit to the Scott Duncan hut was fairly boring in comparison, though we did notice wisps of high clouds streaming in from the west.

As day six dawned it was obvious that the fantastic weather was about to break down in a big way. Torrential rain loomed on the horizon and the attraction of the rest day built into our itinerary was defeated by the realization that a warm storm could torpedo our chances for an orderly exit. And so down, down, down we went on increasingly wet and unpredictable snow. By the time we got to Sherbrooke Lake 3,000 feet below, the sun had come back out, only to illuminate that the lake was in less than ideal shape.

Large aquamarine puddles covered its surface. Kit was first out on the ice and he promptly broke through, soaking his boots. Scott and Steve eventually found a way out onto thicker ice (we really didn’t want to work around the cliffy shoreline). This was a very good time to be at the back of the line as the lead guinea pigs sloshed around on the disintegrating surface of the lake. Eventually we all made it, which called for an extra share of chocolate as we squeezed the water out of our socks. 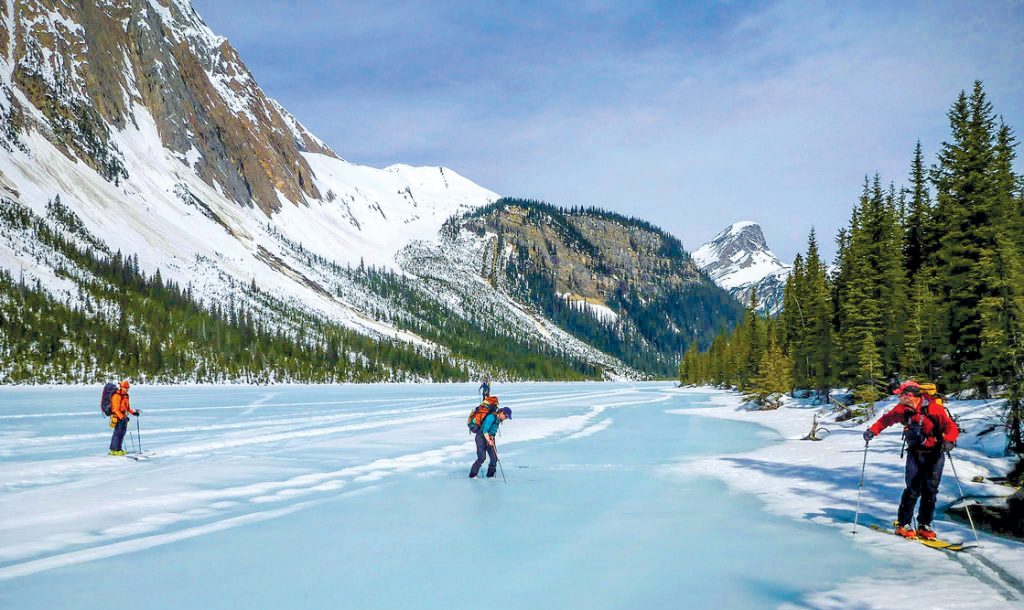 We soon ran out of snow south of Sherbrooke Lake and resorted to carrying the skis for long stretches, clambering over tangled pines. The hum of the highway indicated that we were close though, and a little less than six hours after leaving the Scott Duncan hut we were toasting the trip with Scotch and wearing clean cotton.

We couldn’t help but marvel at our luck with the weather. We had been able to stand on every peak on our list, taking in the special ruggedness and isolation that very few, if any, hut-to-hut tours can offer. No chairlifts, few people, huge icefields and soaring summits – the Wapta Traverse is certainly one of the premier backcountry ski tours in the world. As we drove west toward Revelstoke that afternoon, the skies opened up and it rained all the way to the border.

Hut Reservations: Huts can be reserved months in advance from the Alpine Club of Canada ($30 Canadian for ACC members).

Other info: $20 CDN parking fee required for the parking lot at the Great Divide Lodge, at the end of the traverse. 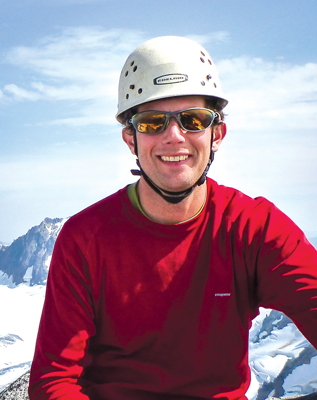