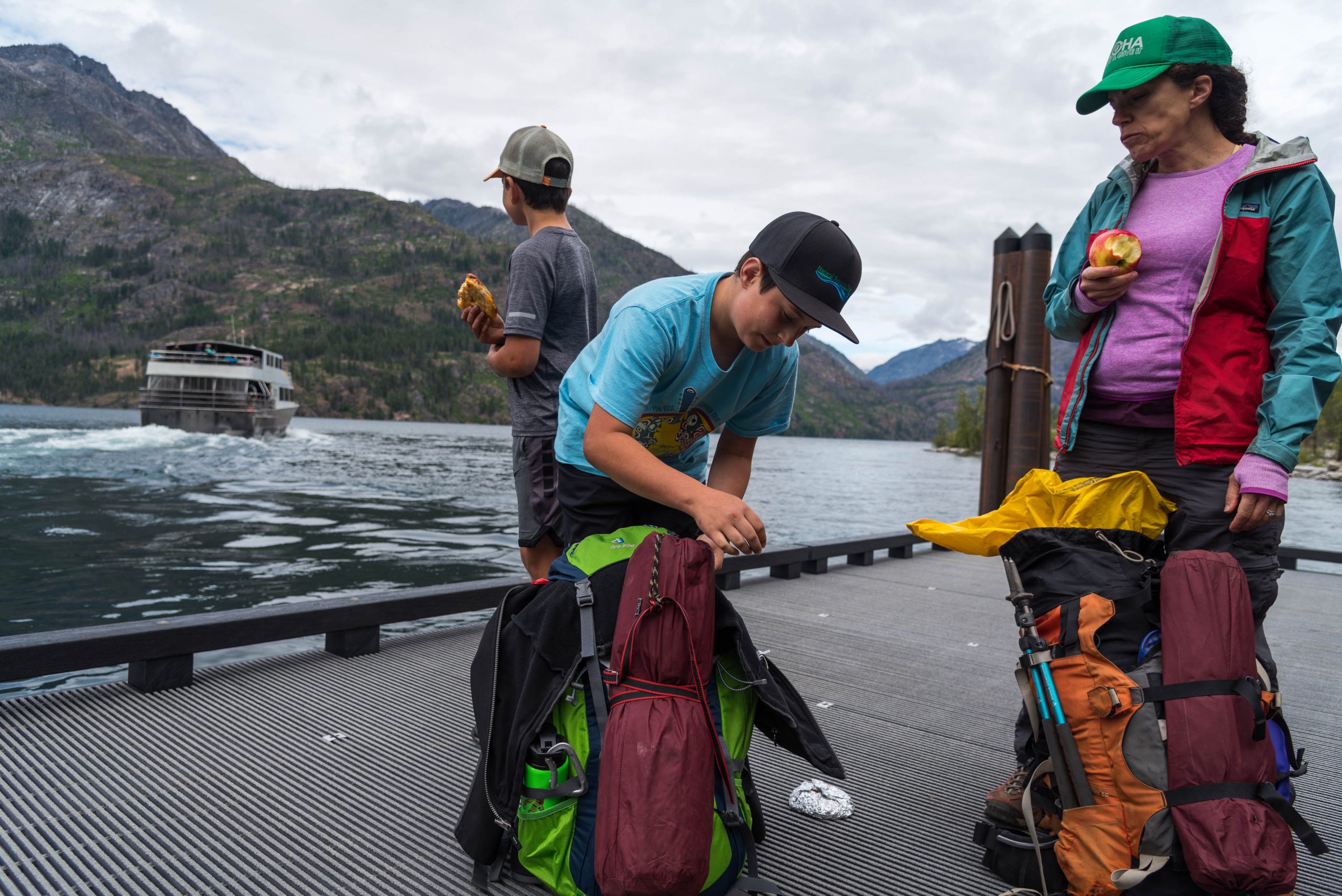 Best: Spring or fall, summers are quite hot

The drone of the Lady of the Lake faded slowly as we stood on the dock at Prince Creek, fiddling with gear and eating snacks, delaying the inevitable shouldering of our (too) heavy packs. Our two boys (10 and 12) nervously eyed their loads – the biggest either of them had tried to carry for a day, much less three. The two dozen others who got off the boat with us were much

younger, without kids and all planning to hike the trail in two days, compared to our three. Their excited chatter receded along with the boat’s engine, and we were left alone on the dock with the sound of the water lapping gently against it. It was late morning, the weather was pleasant, we were out of cell range and had nothing to do except walk for three days as a family.

The better weather and longer days that spell spring in the Pacific Northwest are sometimes frustrating for avid hikers. Obsessively checking trail conditions and weather forecasts, it often seems like the compelling trails take far too long to come into family friendly condition (i.e. mostly snow-free). Sure, there are valley walks to do, but most of us crave the wide views of the alpine.

What is a hiker to do? The standard answer is to “Go east!” But in March or April, even the peaks on east side of the Cascades are cloaked in snow. Ah, but have you heard of the Chelan Lakeshore Trail? Sure, it isn’t the high alpine, but the trail has some of the best views you’ll get below treeline, with plenty of meadows and rock outcrops that lend themselves to expansive views as you sidle along above the lake, gazing out across at craggy 8000-plus foot peaks still holding the winter’s snow.

Interestingly, the lakeshore trail is a one-way hike without a car shuttle. That’s because neither end of the lakeshore trail is connected to the outside world by road. Instead, the Lady of the Lake shuttles you and your gear to either end. The Lady (actually several boats now) has been transporting people and supplies up and down Lake Chelan for decades. With advance warning, the boats can deviate from their regular run to drop you at Prince Creek, which is the southern end of the lakeshore trail. After hiking to Stehekin, the Lady’s normally scheduled service will bring you back to your car. (Pro tip: Catch the boat in Field’s Point Landing rather than Chelan to save time on either end.)

But back to the hike.

With a bit of cajoling, I managed to get the loads hefted and the team pointed north up the hill and away from the lake. An initial climb of about 400 feet to a crossing of Rattlesnake Creek (watch for snakes on this hike, especially in warm weather) presaged the undulating nature of the trail for the next several days.

In and out of draws, burn scars and open pine forest but never far from the lake, the views were varied and always interesting – even more so because the abundant bird life visible along the way during the spring migration (Western tanagers, mountain bluebirds, Cedar waxwings, etc.). The ups were never too long, nor were the drops, which is a nice change from hiking in the alpine and was easy on our kids.

Still, after about six miles and a few hours of walking, we could tell that we had better start looking for a nice camping spot to let the boys play for the afternoon (and for us to get caught up on our napping and reading). 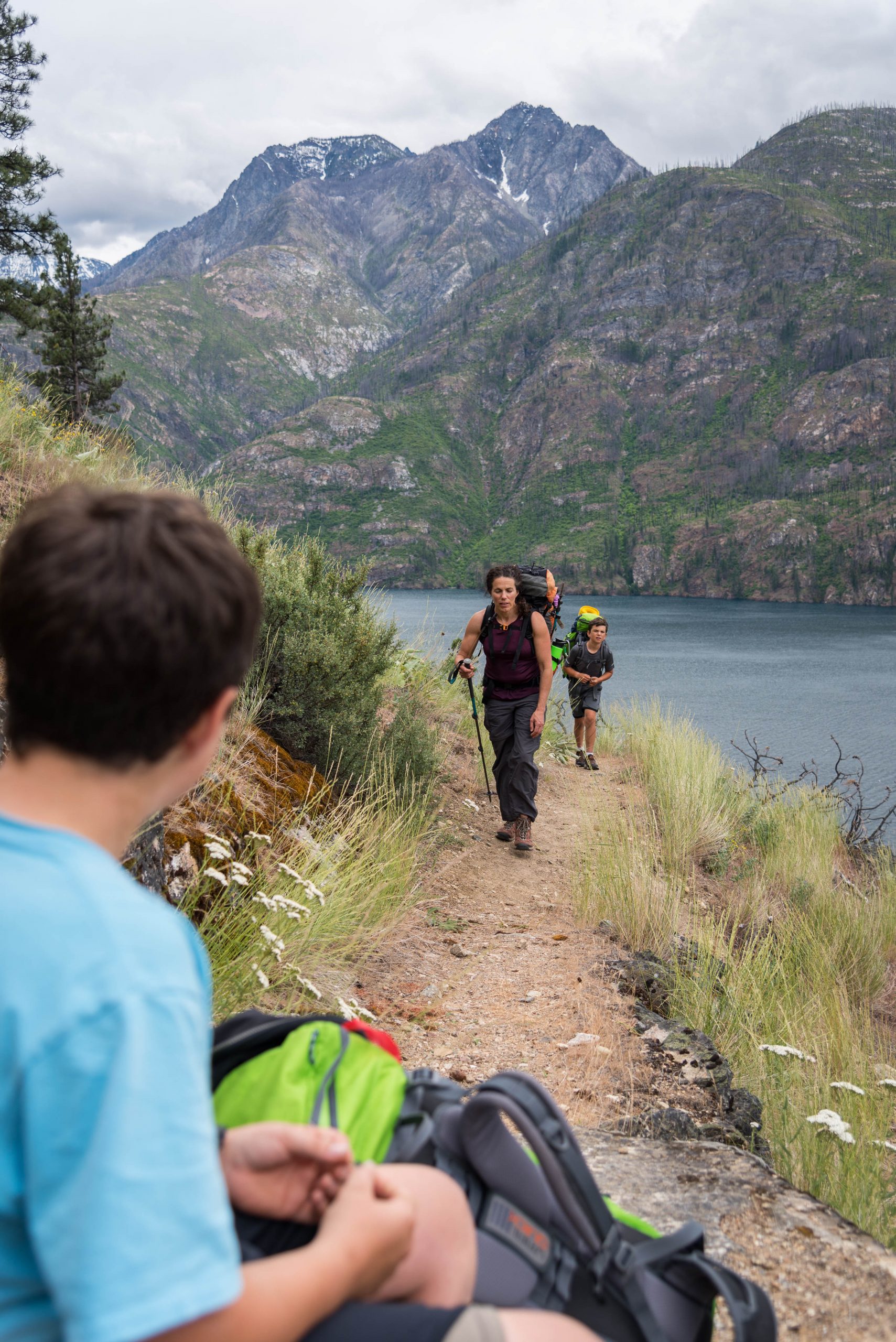 There was a short trail dropping down to the lake after crossing Cascade Creek and a rest was called for while I dropped my pack and walked down to investigate. A few of our boat mates were setting up their tents as I arrived but there was plenty of space for both parties to camp without crowding each other. I hurried back to share the good news and saw by the look on our kids’ faces that hiking much more was probably out of the question anyways (there are more camps about a mile further on at Meadow Creek if the Cascade Creek spots are full).

The boys fell in love with our camp spot immediately upon arrival. It was next to a small creek and a few feet from the waves crashing on the lakeshore, driven by the increasing afternoon winds (a common occurrence on Chelan). They weren’t much use as my wife and I got camp set up, but who could blame them? The outdoors are the ultimate playground for kids, and we watched them amuse themselves for hours as we settled in, gathered firewood, made dinner and prepared for the stars to come out. After a campfire and some s’mores, it was time for a well-earned rest.

The next day dawned – overcast but warm – and we were up and away, back on the trail toward Stehekin by 9 a.m. It was a repeat of the day prior – short ups and downs, burns, open meadows, birds and very few people. We had the whole day ahead of us so we took frequent breaks to snack, bird watch and admire the views across the lake. 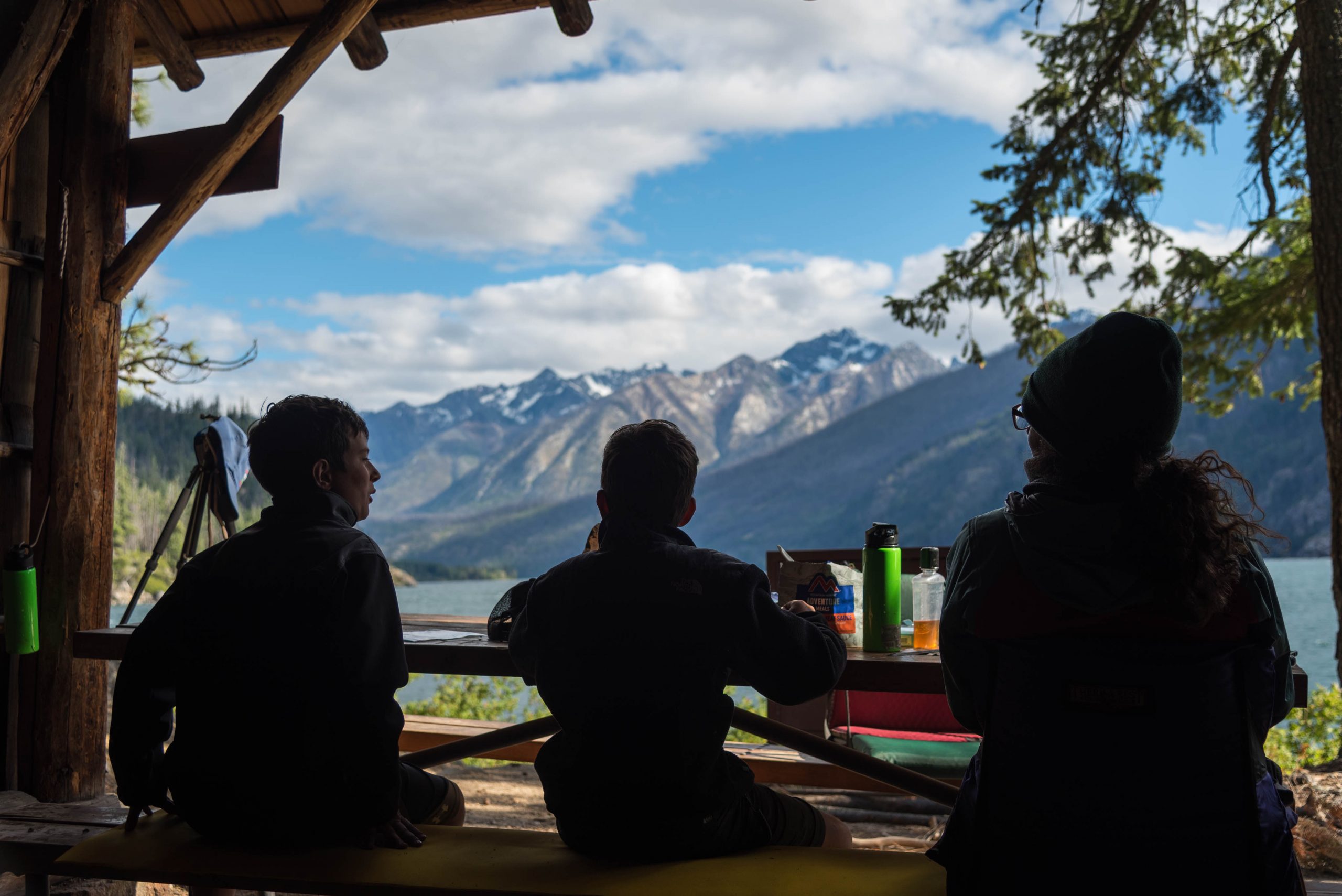 We passed the excellent camps at Moore Point (11 miles from Prince Creek) and pressed on a few more miles to the shelter at Flick Creek (~14 miles) where a group was just clearing out after a late lunch. The site is quite small so there is really only room for one party. Camping options are limited and not great beyond Flick Creek (until you get to the excellent campground at the edge of Stehekin at 17 miles). A party after us had to shuffle on and make do further down the trail.

The weather on our last afternoon was clear but quite windy, with large waves dashing against the point in front of the tent, which strained at its guy lines. We were thankful for the sturdy wood shelter that had recently been rebuilt by the U.S. Forest Service, a great spot to read and cook out of the wind. The evening was a repeat of the night before with more fire, s’mores and star gazing before bed. 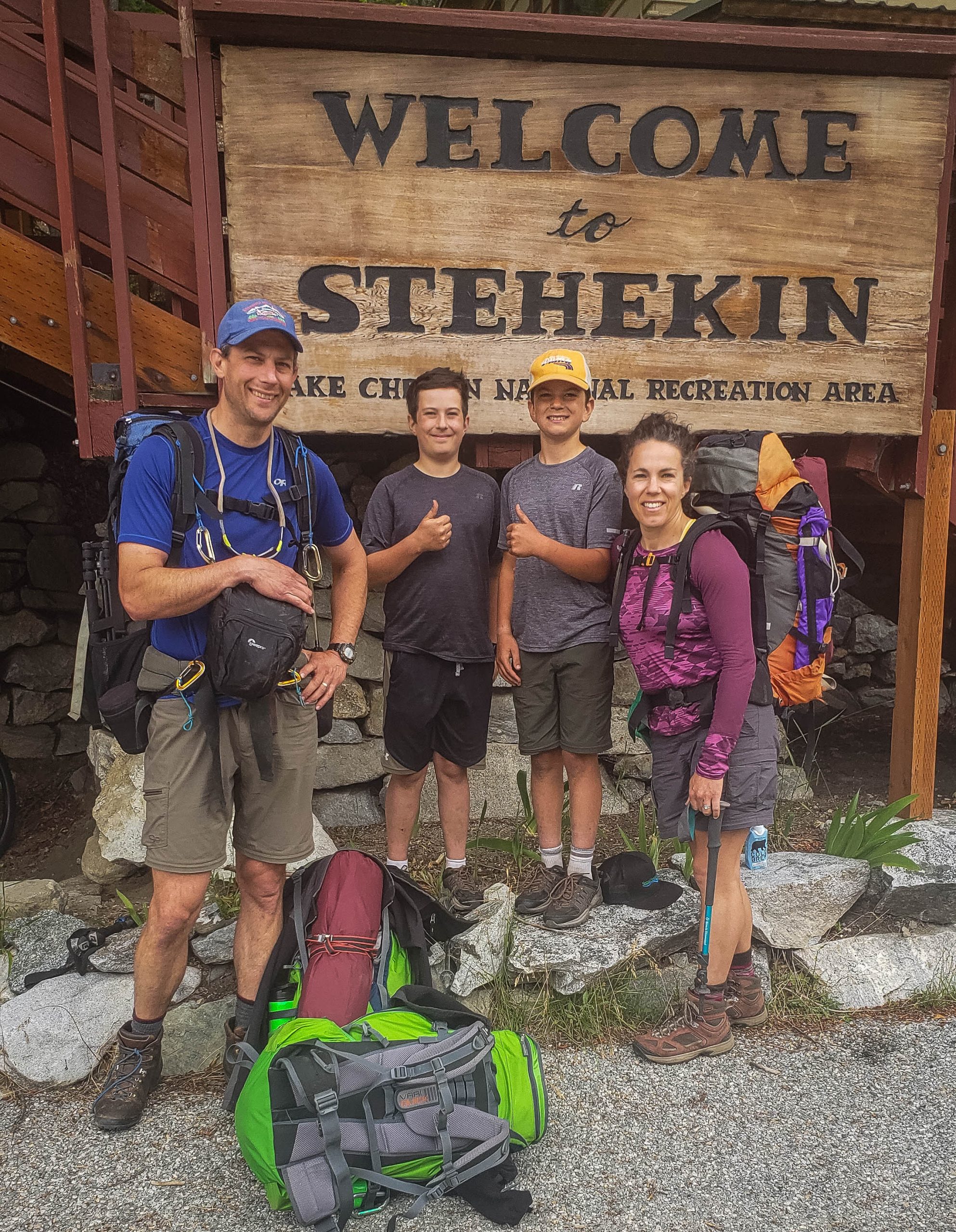 On our final day, we had a leisurely start, knowing that the hills were behind us and we only had to walk three easy miles to Stehekin before catching the boat in the early afternoon. We strolled in the warm spring sun, admiring the sparkling lake, keeping our eyes peeled for birds. We had settled into the rhythm of the trail and weren’t in any rush to head home to the modern-day bustle of work and school. We approached Stehekin sooner than we expected, so soon that we stopped a quarter mile short of town, took our packs off and sat by the edge of the lake.

We gazed out at loons on the glassy surface, not quite wanting the hike to be over. It was maybe the first time we had felt that on a backpacking trip as a whole family. We had enough food left to have a trail lunch, quietly admiring what we had accomplished together before reluctantly shouldering our packs (that now didn’t feel heavy at all) and walking into Stehekin.    x