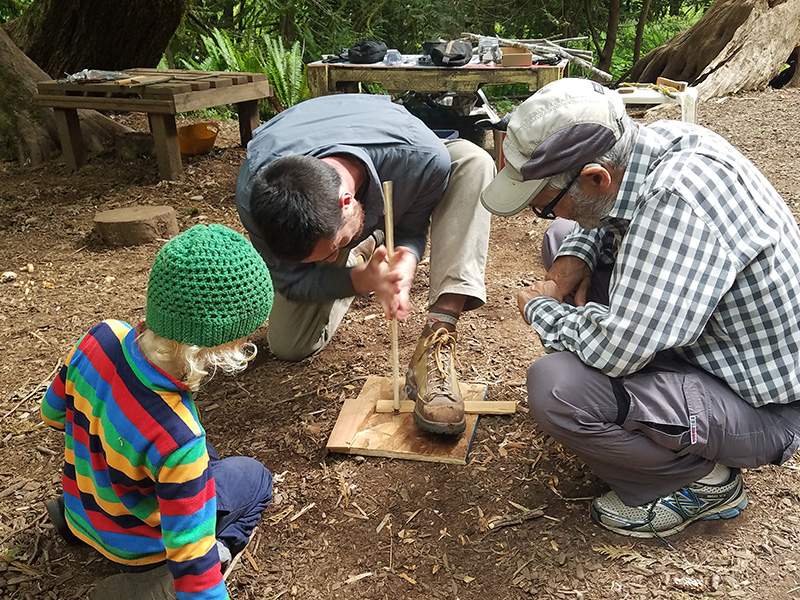 Rubbing two sticks together. Put so simply, it sounds trivial. Yet it was necessary for all that’s come after: The moon landing, TikTok, 7.9 billion people sustaining life on this rock and for you to read this now. All of which have separated us from nature. But through it and other activities, we can reconnect with nature.

Naturalist and wildlife tracker Ryan Johnson, who started his own outdoor education operation, Firecraft Northwest, said he felt closer to nature the first time he made fire by friction, and he’s seen it in the eyes of his students too. He said he also continues to experience it through animal tracking. 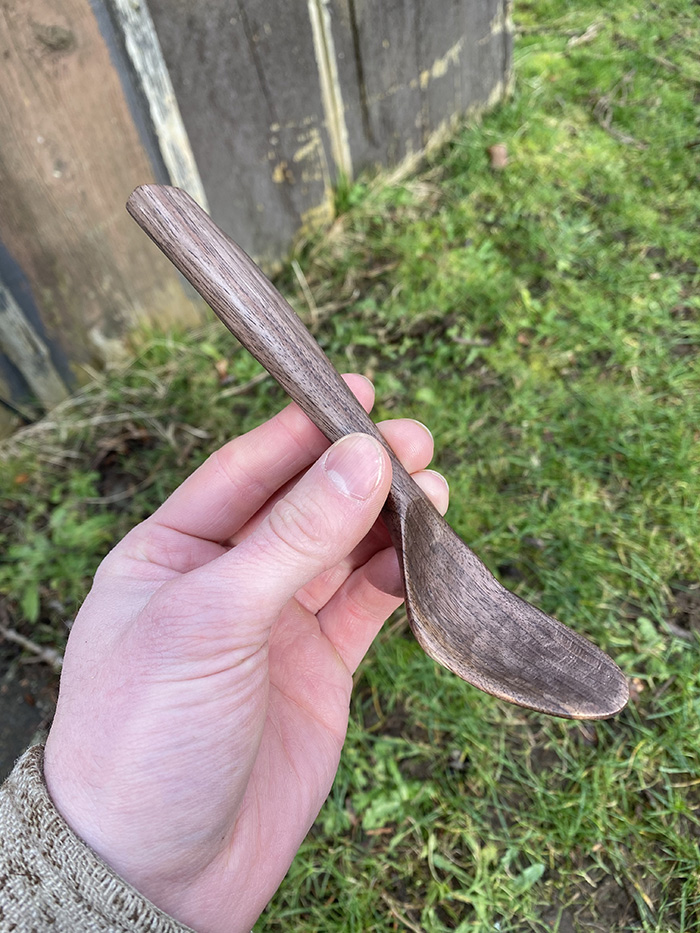 Johnson said when coming upon an animal track “we get an opportunity to tell the story of what happened even when we weren’t there and we didn’t get to see it.” This story and the required piecing together of the passing animal’s movements — through its tracks, gait, disturbances and behavior — builds a bridge between the tracker and nature, he said.

For those who attend his workshops — two of his favorites being friction fire and animal tracking — Johnson hopes part of what they get out of his class is a newfound connection with nature and the perspective of human beings as a part of nature, opposed to human beings against nature. “Once upon a time human beings lived in accordance with nature, if there’s a takeaway from some of my workshops and classes I hope that’s part of it.” 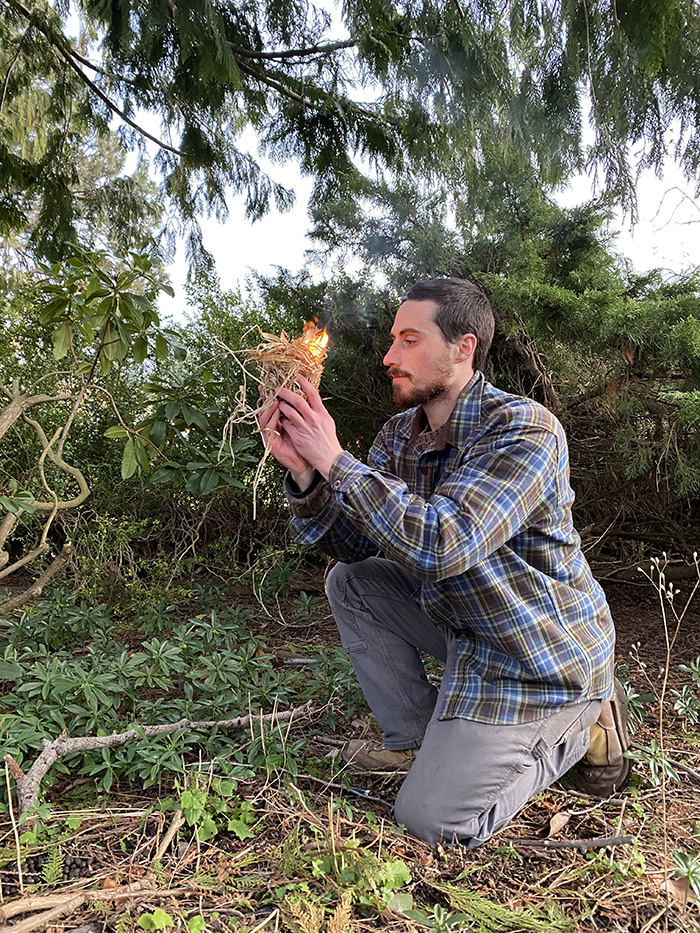 Johnson, 33, has been leading nature courses since 2014. He started as a volunteer for school field trips at Oxbow Regional Park in Gresham, Oregon, east of Portland. As a trade for his volunteer hours, Johnson received naturalist training for free. After two years he was working for the park while working in restaurants and as a lab aid. But running classes for the park, he said he couldn’t see himself doing anything else.

Johnson created Firecraft Northwest in April 2021, and said the pandemic played a role in its launch. His administrative job was fully remote. And with people getting vaccinated and back outside, the time felt right.

So far, Johnson has led spoon carving classes, friction fire classes and knife sharpening classes at the Chuckanut Center, where many of his woodworking classes are held. The center, beside Fairhaven Park, is a community-funded nonprofit, run by volunteers, that offers urban homesteading skills, gardening and cooking classes.

Johnson runs his wildlife tracking and survival classes out of the Bell Creek Nature School in Deming, on Mosquito Lake Road, and on the divergence of the Nooksack River’s north and middle forks. With 10 acres of old-growth temperate rainforest and riverside, the nature school provides space to explore and practice learned skills.

Johnson said one of the reasons he created Firecraft Northwest was to make outdoor education more affordable and accessible.

Most outdoor education opportunities are expensive, Johnson said, and he wanted to make them available to people from all income groups. Classes range from $25 to $65, with the more expensive classes offered on a sliding scale. “Having access to wild spaces and learning about nature and survival skills is something that is really enriching for everybody,” he said.

He also hopes to provide a space for families to share nature experiences. Many outdoor education classes are age-dependent, whether they are day camps or field trips to homesteading and gardening classes. He said he wants Firecraft to be a place for families to do these things together.

Johnson has multiple certifications including as a Pacific Northwest naturalist, Washington Department of Fish and Wildlife hunter’s safety training, and wilderness first responder. He also has a bachelor’s degree in biochemistry and psychology from Arizona State University. 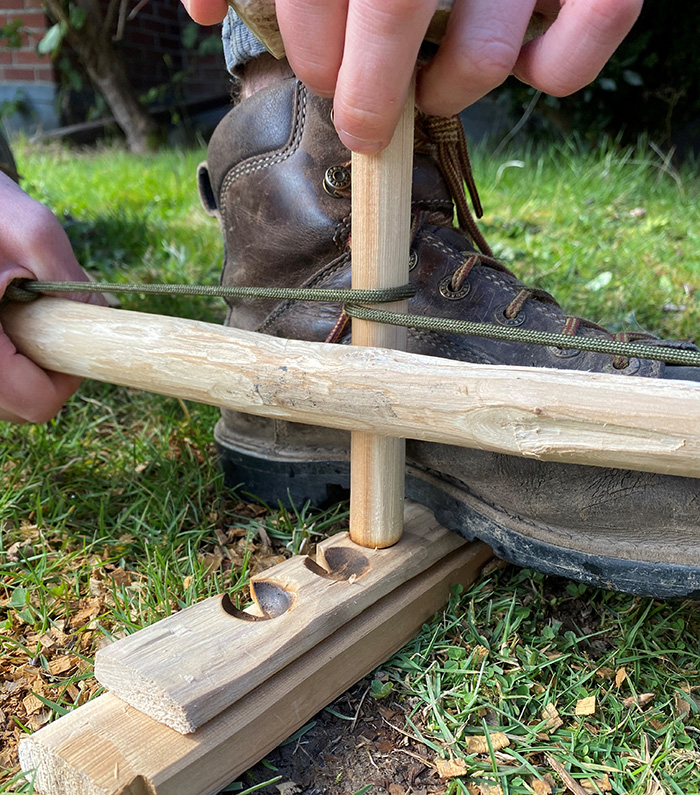 Johnson said he’s mostly worked with kids. And he said watching their progress, whether it be in tracking or crafts, is one of the most powerful feelings.

He recalled a course he taught with another instructor on overnight shelter building. They had adolescent students build their own fire and use it to keep warm through the weekend. As a challenge, Johnson said he and the other instructor held onto the students’ sleeping bags. They told the group, who said “OK” to the challenge, if they feel uncomfortable or get too cold, to let them know and they would give them back their sleeping bag.

“It was supposed to be a challenge for them, so that they could see what that felt like — to have to stay overnight at a shelter and tend to their own fire to stay warm,” Johnson said. “It’s a really powerful feeling.”

At one point during the night, a 12-year-old girl asked for her sleeping bag. The two gave it back, as promised. The next morning, Johnson said she woke up, came over to camp and told them she had nothing to fear the night before. “I woke up this morning, I looked up and there was a little bit of frost accumulating on my face, and all the birds were singing, and everything was so beautiful,” she said. “I had nothing to be afraid of.”

Johnson said he teaches for those moments.