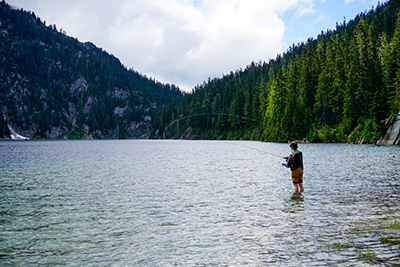 The holdout Arctic grayling of the North Cascades

Story and photos by Nick Belcaster

This is a story about a fish that shouldn’t be here.

Maybe the grayling hears me, because it shudders in my hand as I cradle it in the lake. This part of fishing always feels the most guilty — the shy turning over in a wet palm; watching the light play across this thing the water grew. It’s a tender weighing of scales.

Thymallus arcticus — the Arctic grayling. A fish that by most accounts has no natural right to be in this lake, at least not in a traditional sense. Grayling enjoy a holarctic distribution, encircling the Northern Hemisphere in the near-arctic climes of Alaska, Russia and northern Europe. Here, below the 49th parallel, is a long way from home.

It is, however, one of the most stunning fish I have ever laid eyes on. A relative of salmon and trout, grayling are pewter-colored torpedoes, shimmering with the polish of metal and equipped with their most distinctive trait: A large, sail-like dorsal fin painted in the iridescence of a tropical butterfly wing. It is a small miracle to be attached to one at the other end of a line. It is another to land them in a net.

But hang around enough old salts, and eventually they’ll start to let their secrets slip. This is how I catch wind of this difficult to access lake high in the North Cascades — a hanging glacial scoop of granite and snowmelt, guarded by a bushwhack that only gets worse the more times the story is told, and the unique fish that were said to hold on here. 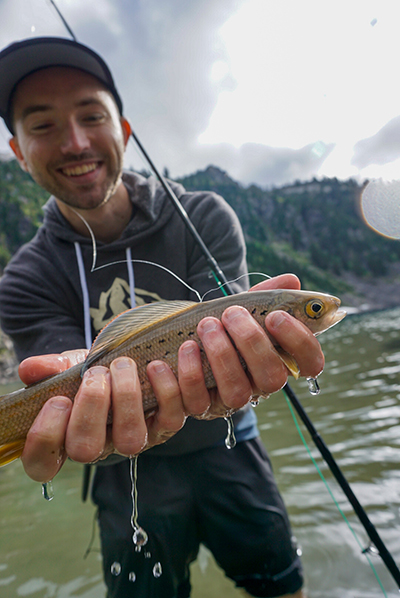 Grayling, they mused — big fins on ‘em. Like in Alaska. It’s what many fisherfolk in the Lower 48 might call an exotic catch, which was likely the idea. Washington state, and indeed many western states have a long history of bending the natural order and stocking fish for recreational fishing, including grayling. Yosemite National Park even had its own ‘Grayling Lake’ stocked for four consecutive years. But here in Washington, where numerous attempts at establishing grayling have been made, only one lake today is said to support a sustaining population.

And it’s the one I’ve found myself knee deep in, watching as the proof darts off.

In early July of 1981, a University of Washington (UW) graduate student by the name of David A. Beauchamp likely stood near enough the same spot, knee deep, wondering how it was that these beautiful fish were sustaining themselves all the way up here.

Grayling generally require clear, cold water to thrive in, with a further requirement of a gravel or sand-bottomed feeder stream for them to spawn in. It’s something that Beauchamp would have known well, as he would later write about in his thesis on grayling spawning habits and the reason he was here:

In the North Cascades, where elevation topography lines nearly meet, the low angle, sinuous mountain streams that grayling require are an oddity. But over Beauchamp’s shoulder would have been exactly that: A broad pan of azure and green water that stretches back from the inlet of the lake, hemmed in by a tumble of granite talus fields, and all fed by the twin streams of a grand snow field high on the slopes of an unnamed 6,000-foot peak.

It’s the first thing that catches my eye as we stumble out of the devils club and huckleberry last August. While most of our trek has been on decommissioned logging road, there has been considerable rewilding since the ’80s — with grand swaths of slide alder tangling themselves into a rat’s nest of a fishing trail. It only gets worse the further we push in, and is topped off with an off-trail heave up waterfall gullies and granite boulder fields.

But now here, I can see how it is that grayling have held on: Through a geographic and hydrologic fluke, fish planted here in 1946 have not only lived, but thrived. Beauchamp would later make multiple visits to the lake, noting that the grayling relied on one of two snow-fed streams for spawning. It was this thought that got another UW ichthyologist thinking: Would that be the case forever?

Dr. Jeff Jensen is a senior lecturer in the division of biological sciences at UW, and even accompanied Beauchamp on one of his forays in the ’80s. Picking up where Beauchamp left off, Jensen recently took up the mantle of the grayling study with an idea: If these fish have been able to hack out an unlikely existence here since the ’40s, would that now be threatened by climate change? Even Beauchamp had seen signs during his studies that low flow years might jeopardize the population. Simply put: If the seasonal snowpack dwindles, will these fish be able to survive?

The first year, equipped with various flow meters, data loggers and grad students, Jensen beat his way into the lake, needing to employ a ladder at one point to cross a high river. There they found the lake frozen in time since Beauchamp had seen it. The same stream provided spawning habitat, the same studiously-plotted willows still grew. But most significantly, the survivors continued to survive.

Up valley, where the snowmelt tumbles out of the hills, the twin streams that typically fed the lake had split, pushing most of the water into the second stream, one that Beauchamp and Jensen had agreed was previously unsuitable for spawning.

“The [second] stream was now flowing beautifully. The gravel was clean and clear,” Jensen said. But most importantly, “It was chock full of grayling.”

And not only that, but grayling were also now spawning at the log jammed outlet of the lake, something Beauchamp had never noted. Here, playing out before Jensen, was a real-time stress test of the grayling’s ability to shoulder a major habitat shift, and to everyone’s surprise, the grayling were managing it with aplomb.

“The message I took from all of that was that they are a lot more flexible in terms of where they spawn then we had thought earlier, and that maybe the population will do better in the face of whatever changes with changing snowpack,” Jensen said.

“I’m now a lot more hopeful for this population.”

The next morning at the lake, we roll out of dew-covered bags and immediately back into the fray of mosquitos that haven’t left our side all night. It turns out 60 or so acres of warm and shallow water is good at sustaining more than just grayling. We skip breakfast and instead walk back down into the lake, wading hip deep with the sun at our backs. 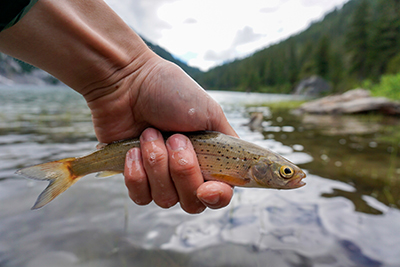 Tying on a little leech pattern, I make casts out to the drop off of the broad alluvial fan that stretches across the inlet of the lake. The light goes long down the valley of the lake, stretching from the inlet streams to the far walls of granite. The bite is on, and it isn’t long before I have another survivor in hand.

In Beauchamp’s time here, he would take angler surveys, tallying the number of grayling caught each summer, with numbers that barely tickled double digits. With enough time this morning, I might hit that number alone. Against all odds, these fish have made this lake home.

I let go a nice 8-inch fish, cast again and immediately am on once more. It feels like every cast lands a fish. Grayling, cutthroat, grayling. We go until our arms go numb.

Every tug is a little act of rebellion. We’re still out here, whether we belong or not.  x

Based in Bellingham, Nick Belcaster is an adventure journalist who enjoys breaking a tree line, carrying as little as necessary and long walks across the country.