Story and photos by Craig Romano

I have lived nearly my entire life in the Northeast and Northwest. I love green landscapes and mountainous regions dotted with lakes and rivers. I also love sunshine and new adventures, and by late winter I need a break from the Northwest’s grey drizzle. For the past six years I have taken frequent trips to southern California thanks to my wife having extended family there. And much to my surprise I have grown fond of the region and love the hiking and exploring I get to do on those trips.

Sure, it’s a land of freeway entanglements, parched hillsides and more than 20 million people living on top of each other. But there is a whole other world beyond that southern California – one of sprawling parks and preserves and excellent trail systems. One of beautiful hillsides of old growth live oaks and creeks lined with majestic sycamores. One of rare fauna and flora and landscapes that are strikingly beautiful and so radically different from my familiar Northwest. One where it’s possible to stand on a mountaintop or in a desert canyon and, yes, be alone. And despite the fires, southern California has some of the most agreeable weather anywhere.

If you’re ready to start exploring southern California beyond Disneyland, Universal Studios and Huntington Beach, read on. Surrounding those 20 million people are the Peninsular Ranges, with several peaks exceeding 10,000 feet, desert landscapes with millions of acres classified as wilderness, pockets of undeveloped coastline, scores of national, state and regional parks and preserves and hundreds of miles of trail. Let me introduce you to SoCal au natural. 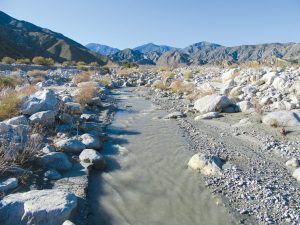 Whitewater Canyon sits in the heart of the new Sand to Snow National Monument. Established by President Barack Obama in 2009, this 154,000-acre wedge of wildlands connects the sprawling deserts of Joshua Tree National Park to the San Gorgonio Wilderness in the San Bernardino mountains, home to San Gorgonio Peak, the highest summit in southern California. The Whitewater River, which flows through this dramatic canyon, is the largest river between the Mojave and Colorado rivers.

The environmental nonprofit Wildlands Conservancy manages a beautiful preserve and visitor’s center in the heart of the canyon. From here you can take off on a series of trails, including the Pacific Crest Trail, and explore varied landscapes. Views of lofty snowy summits in the distance hovering over ridges of sandy desert make it obvious how this monument got its name. 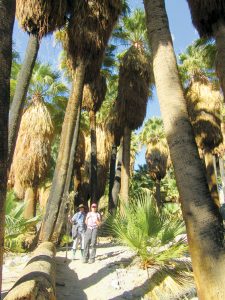 Protecting more than 17,000 acres along the San Andreas Fault just minutes from Palm Springs, the Coachella Valley Preserve contains 30 miles of trails. It also contains some of the last habitat for the Coachella Valley fringe-toed lizard, which has adapted to live in this harsh environment where surface temperatures can reach 140 degrees. If you see one, consider that a major score.

Managed by the Center for Natural Lands in cooperation with government agencies, the preserve protects some of the last large dune systems in the area as well as one of the largest oases of native California fan palms. There are actually several palm oases in the preserve, but the one in Pushawalla Canyon is exceptionally striking. The hike to it along Bee Rock Mesa is stunning with its wide-open views of the Coachella Valley with snow-capped giants, mounts San Jacinto and San Gorgonio, hovering over it. There are good views as well to the north of the high desert ridges of Joshua Tree National Park. But unlike that popular park, you won’t be fighting crowds here beyond the nature trails near the visitors center.

The way to the Pushawalla palms involves dropping down a steep gully. Once in the tight Pushawalla Canyon, savor the shade and enjoy walking along a flowing creek. You can make a loop by visiting the Horseshoe Palms and Hidden Palms on a trail traversing open slopes and ridges granting sweeping desert views. The trip is 6.5 miles with 1,000 feet of elevation gain. If you want to add miles you can hike a long way up the canyon. 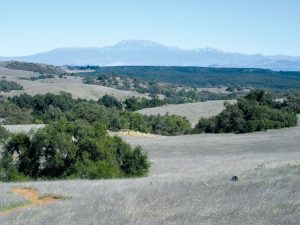 One of my absolute favorite places in southern California, the nearly 10,000-plus acre Santa Rosa Plateau Ecological Preserve defies time. If you want to see what southern California looked like before 20 million people took up residence here, this is the place. Situated on a plateau of the Santa Ana Mountains near Temecula, the preserve consists of bunchgrass prairies, wildlife-rich seasonal pools and babbling creeks shaded by groves of old-growth oaks and sycamores. And owing to its positioning on a 2,000-foot plateau, you overlook the valley. You have to strain to see civilization; on a clear day, you can see the San Diego skyline from the preserve’s Monument Hill. Wildlife is abundant here and you will most likely see a coyote or two.

The more than 40 miles of trails here don’t get crowded. One of my favorite destinations within the preserve is the twin historic adobes. The two adobes, one dating to 1846 and the other 1855, are the oldest structures in Riverside County; one was built when this land was part of Mexico, the other in the new state of California. 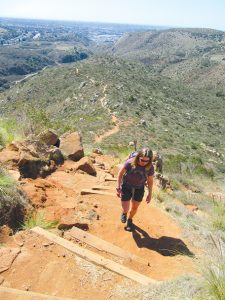 Located within San Diego city limits, Mission Trails Regional Park is more than 7,200 acres and contains 65 miles of trails. It’s one of the largest city-owned parks in America. You’ll have a difficult time recalling that you’re only ten miles from the downtown of America’s eighth largest city.

The park is bisected by the San Diego River and consists of a series of ridges, small canyons, a lake and five small but prominent peaks. The highest of the peaks, 1,592-foot Cowles Mountain, is the highest point in the city and quite popular. Parks officials devised a plan to disperse use in the park by creating the Five Peak Challenge. The object is to hike all the summits, take a selfie on top and then submit the pictures for certificate of recognition and a logo pin.

From all of the summits the views stretch from lofty 6,512-foot Cuyamaca Peak in the east to Mexico’s Coronado Islands in the Pacific Ocean to the west. The park contains an array of wildlife including eagles and bobcats. Also look for remains of a dam built in 1803 to irrigate the first Spanish mission in what is now California.

Insider tips for your trip

The best time to visit is late winter and spring, when occasional rains turn the landscape green. Expect snow in the higher elevations. Temperatures can soar in summer and fall, especially in the desert, and smog can be thick in the Inland Empire (Riverside and San Bernardino counties).

Skip LAX if you can. I fly into Ontario International Airport from Sea-Tac on an Alaska Airlines direct flight. The Ontario airport is small and easy to get out of. You can be in the mountains within a half hour and the desert or San Diego County within an hour. The Palm Springs International Airport is another good choice with nonstop flights from Everett, Bellingham and Vancouver.

Being a guidebook author, I appreciate good guidebooks and they are indispensable for discovering new places. I highly recommend Wilderness Press’ Afoot and Afield series. Pick up the ones for the Inland Empire and San Diego County for hikes mentioned in this article. A good web source is Nobody Hikes in LA. You’ll get good reports, suggestions and an earworm of a classic Missing Persons song.

Craig Romano is an award-winning author of more than 20 guidebooks with Mountaineers Books. He has hiked more than 20,000 miles in Washington State from the Olympics to the Blues.