Fred Norquist whitewater line entered into Rider of the Year awards. Video below the break.

If you picked up our summer issue, you may remember this photo:

The shot, taken by Tait Trautman on Bear Creek near Mt. Baker, depicts world-renowned kayaker Fred Norquist on the first descent of Klahanie Falls. When contributor Eric Parker sent this photo in, we were blown away by the power of the waterfall and the skill (not to mention guts) it must have taken to send it. Parker was the third person to drop the falls, after Norquist and Brendan Wells. He described the drop like this:

“It’s a 50-60 foot waterfall with a fast paced, technical lead in. The pool is questionably deep and the drop itself is very difficult. I charged into powerful curling waves above the lip and what felt like a split second later, I was soaring down the falls to the pool below. I took two strokes down the drop, tossed my paddle, and braced for impact. After a substantial hit, I rolled up and was immediately overwhelmed with joy and adrenaline.”

A panel from Tribe Rider decides who wins, but we’ll let you be the judge. Watch the clip below and view the other entries at rideroftheyear.org 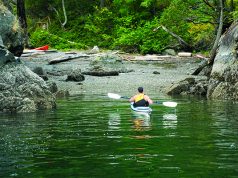 In search of a campground 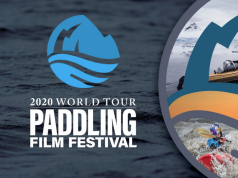