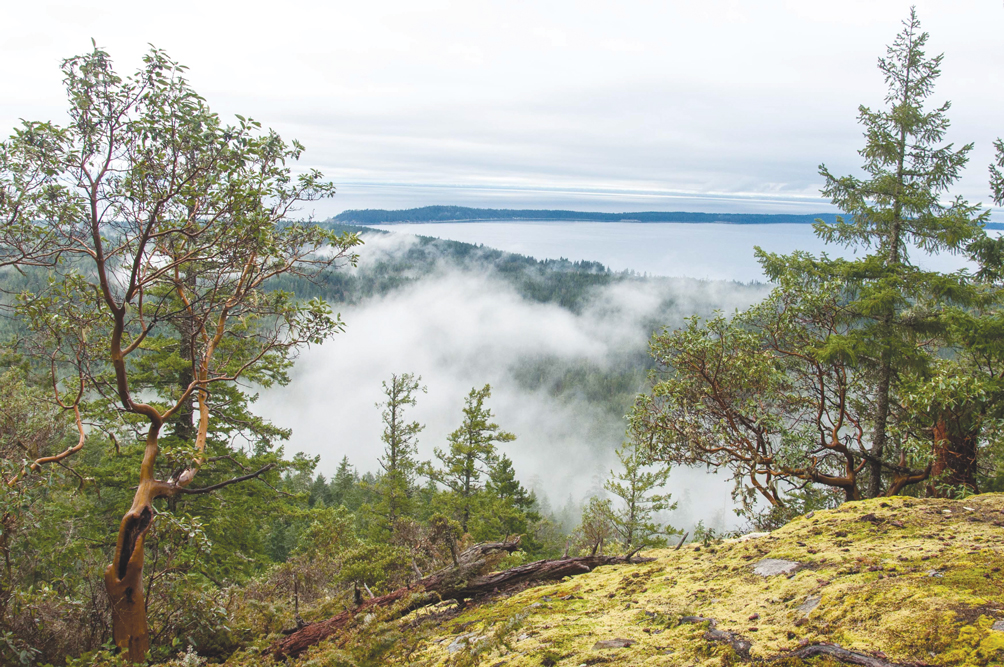 Story and photos By Brandon Fralic

Jesse shifts the Yukon into park and says, “Hold on, I think this might be the Hill of Death.” He steps out of the vehicle and disappears around a corner, walking slowly down the steep, deeply rutted B.C. Hydro road. A minute later he reappears, opening the back door. “This is the end of the line, folks!”

Rachel and I clamber out into the rain. It’s late march and we’ve taken a gamble on the weather in exchange for some solitude on the Sunshine Coast Trail (SCT). Our driver, Jesse, has given us a lift from the nearest town of Lund, B.C., to within half a kilometer of the trailhead. He’s wise to avoid driving down the Hill of Death. According to our guidebook, it’s “a gold mine for towing companies.”

We won’t see Jesse for three days. As he drives off, the weight of my decision to hike a 45-km (28-mile) section of Canada’s longest hut-to-hut hiking trail immediately sinks in. Or perhaps it’s the weight of my pack. Either way, there’s no turning back now. We make our way down to the trailhead at Land’s End — kilometer zero of the SCT. We make last minute pack adjustments, take a photo and we’re off.

The Sunshine Coast Trail begins at Sarah Point and stretches 180 km (112 miles) across the Upper Sunshine Coast of British Columbia. Though not quite an island — the coast is separated from mainland Vancouver by Howe Sound and countless rugged mountains — it’s a slower-paced portion of the mainland that is only accessible by boat or plane. They call it “Sunshine Coast” for a reason. Often mistaken for neighboring Vancouver Island, the Sunshine Coast is actually protected from the Pacific Ocean by the massive isle — tucked away in its rain shadow. 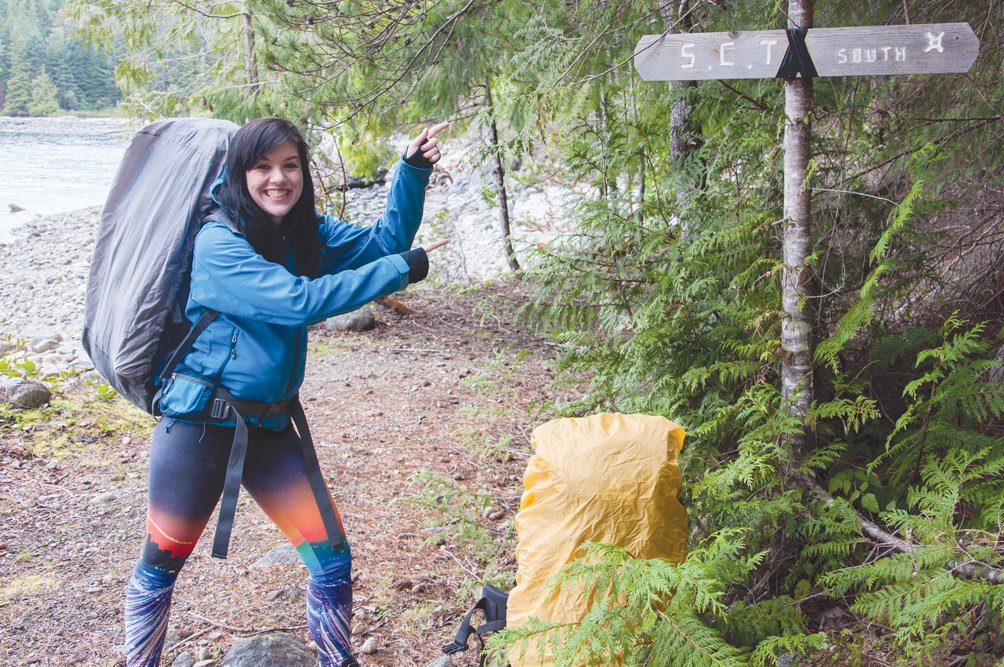 Getting there took half a day from Bellingham. After two ferry crossings and six hours of travel, we arrived in Powell River and stayed in the Historic Townsite district, across the street from the local brewery. It was at Townsite Brewing that we first met Eagle Walz to learn more — Suncoast Pale Ales in hand — about the epic hut-to-hut hiking trail that he helped create.

Eagle speaks with humility about the long-distance trail he spearheaded, giving credit where it is due. But one gets the sense that without his vision and commitment, the Sunshine Coast Trail would not exist as it does today. In 1993, Eagle and a group of local outdoor enthusiasts formed the nonprofit Powell River Parks and Wilderness Society (PRPAWS) to protect the last remaining stands of old growth on the Upper Sunshine Coast. They began building trails to engage the public. One path led to another, and they eventually ended up building the longest hut-to-hut trail in all of Canada. Today, Eagle presides over PRPAWS and is out nearly every day working on the trail with his volunteer crews. He also happens to be the author of the SCT’s one and only guidebook.

After beers and dinner with Eagle we called it a night at the Old Courthouse Inn. For breakfast the next morning, we chowed down on house-smoked salmon eggs benedict at the attached café, loading up on protein and carbs for the hike ahead. In true B&B style, breakfast was included (and greatly appreciated) in our stay. Then it was off to Lund to meet Jesse of Sunshine Coast Shuttles for our trip to the trailhead. 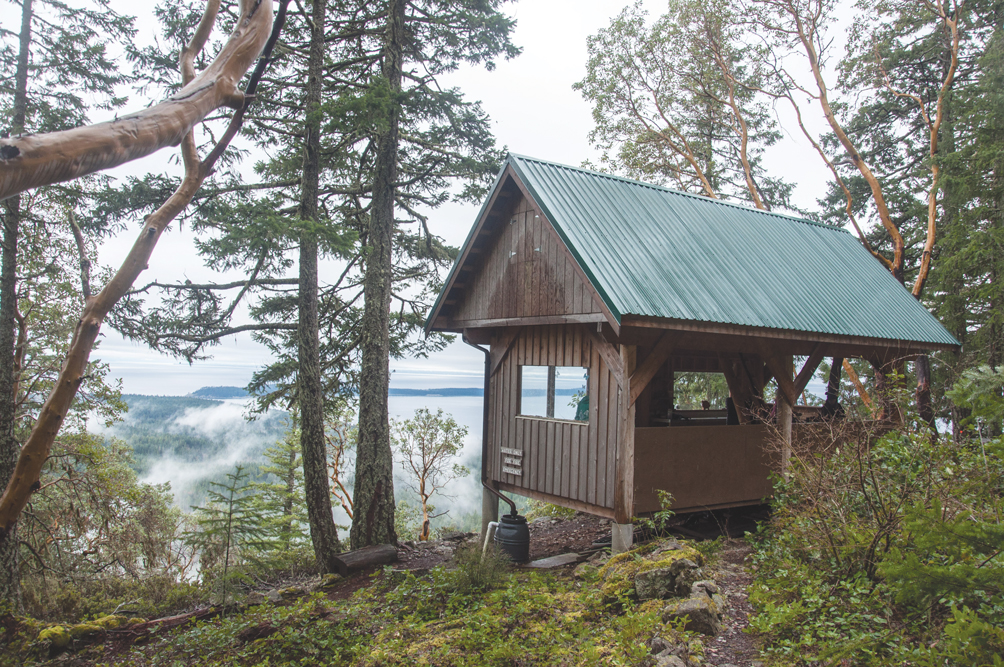 “This is the end of the line, folks!” Those words reverberate in my mind as we set out on the trail. With no one around, the only noises we hear are gentle waves rolling in from Desolation Sound. We climb from sea level to a spectacular overlook at Desolation Bluffs, where the trail’s first logbook awaits. Provided by PRPAWS, these books are placed periodically along the trail to gauge usage. We sign it and drop back down to the beach at Feather Cove.

We spot a few harbor seals in Feather Cove before resuming our hike. Then we’re off again through moss-clad old growth, past lakes and high viewpoints over the Salish Sea. 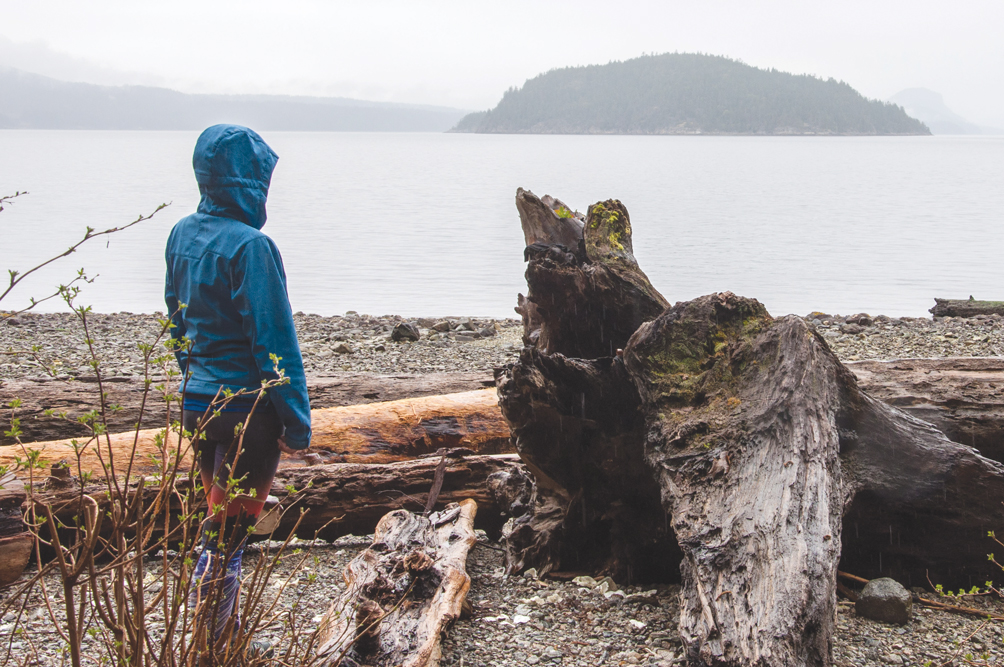 Newly constructed tent pads await, but we’re not carrying a tent. That’s the appeal for many SCT hikers — the ability to hike tent-free. Fourteen shared-use huts are available along the trail, spaced 15-20 km (9–12 miles) apart, and they are entirely free to use. Of course, it’s wise to bring a lightweight tent in case the huts fill up, especially on summer weekends. We took our chances and didn’t miss the tent for a second.

This is of the most remote parts of the SCT, and it’s simply pristine. We don’t see another soul all day until arriving at Manzanita Hut. There, three women from Vancouver greet us as we escape rainfall inside the shelter. We hang our wet clothes, boil water for a meal and watch the sun set while sharing the single beer we packed in from Townsite Brewing. The hut sleeps eight comfortably — 12 in a pinch — so there’s more than enough room for five.

After a stormy night, we awaken to the Sunshine Coast’s namesake rays. The manzanita trees (more commonly known as madrone in the U.S.) outside our hut remind me of childhood weekends in the San Juan Islands. We set out, descending from Manzanita Bluffs’ 300-meter (984-foot) heights into the woods.

The trail is well marked with orange squares for its entirety. Equipped with a paper map and Eagle’s guidebook, we never doubt our location, even with spotty-at-best cell reception. We hike past forest rhododendrons, abloom in spring, through trees young and old, marveling at the trail’s variety. At one point we come to a sign that reads, “Big Gnarly,” bracing our knees for a climb. In fact, Gnarly was once a massive Douglas fir whose remains now stand in solitude. We pass Toquenatch Falls and its sturdy bridge, built by a local group known as the Bloody Old Men’s Brigade (BOMB Squad).

Towards evening we arrive at Rieveley Pond Hut, situated near frog-filled Rieveley Pond. We share a fire with our Vancouver hut buddies before turning in early for another day on the SCT.

Our final day is a beautiful blur. From the 370-meter (1,214-foot) heights of Rieveley Pond we descend to sea level yet again — another rollercoaster ride on the SCT. Along the way we pass several scenic lakes and waterfalls. We pause at Kayach Bluff — a promontory over Sliammon Lake — to text Jesse our progress. A few hours later, he meets us at the Wildwood trailhead in Powell River and we drive a few minutes down the road to Shinglemill Pub for celebratory pints with Eagle. Jesse hands him a Sharpie; I hand over our guidebook.

If you intend to hike the SCT, go before the heat and crowds of midsummer. Go now. Or, wait until fall for shoulder season adventures.

Based in Bellingham, Brandon Fralic writes about Pacific Northwest trails, ales and travel for a handful of regional publications. brandonfralic.com