It’s something that we don’t want to think about. Someone slips and falls. Someone disappears in the woods. Someone is stranded in the mountains. Maybe someone dies.
What happens next depends on where you are. If the incident is serious, you might need a helicopter, but getting a helicopter isn’t always easy. Sometimes the military provides one, sometimes not. Sometimes Homeland Security provides one, sometimes not. These organizations have other priorities that don’t involve search-and-rescue operations. Often the only option is the Snohomish County Helicopter Rescue Team (SCHRT), which is a problem, because this essential service has been de-funded.
This elite team of sheriff’s department employees, mountain rescue volunteers and volunteer rescue technicians, works all over the state. They have done several missions in Whatcom County and on Mt. Baker.
“Over the last several years we were funded by a federal timber tax,” said Bill Quistorf, the chief pilot for the SCHRT. “Now that tax has expired and it doesn’t look like it’s going to be renewed for a while.”
The team was funded through 2014 by Snohomish County, “but it’s hard to get the county to fund us because they’re trying to fund everything else,” Quistorf explained. “Snohomish County ends up paying for the helicopter no matter where it goes. We’re trying to work with other search and rescue (SAR) organizations and the forest

service to find a way to spread out the cost.”
“The county funding has been absolutely critical in buying us time to secure an additional source of funding,” said Miles McDonough, one of the volunteer helicopter rescue technicians. “But it still leaves us without a long-term solution.”
Historically, the timber tax allocated $130,000 to the helicopter rescue team. The money, specifically designated for direct operating costs, already fell short of the $150,000 required to keep the helicopter flying. Although they regularly apply for grants, most of these restrict the allocated monies to equipment costs, not to direct operating costs such as maintenance and fuel.
The team is scrambling to find ways to fund their operations into 2015. They are currently planning a fundraising dinner at The Mountaineers Seattle Program Center in Seattle on April 19. “Our team does rescues, not fundraising,” McDonough said. “We’d love people to come, but if they can’t we’re looking for anything that could help out; from donations for our dinner to people who might want to donate their time to help us fundraise.”
The SCHRT is one of only two civilian operations in the area with a rescue hoist, an 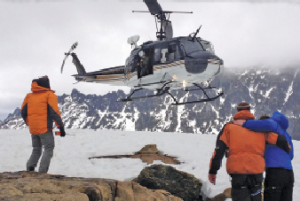 imperative tool when it comes to performing rescues in places where a technician has to be lowered in and hauled out. Washington’s thick forests and steep mountainsides make it impossible for many rescues to be performed without a hoist. “The second operation is in King County,” McDonough explained, “but their team is all sheriff’s deputies. They don’t have any volunteers, and they don’t have mountain-specific training.”
With more than 80 missions a year, the team’s primary focus is on mountain and backcountry environments, but that’s not the only place they operate. “We’re an all-hazard response team,” McDonough said. “We look for lost kids, we rescue people from floods, we looked for people in the river when the I-5 bridge collapsed. We do everything.”
“This is a free resource,” he continued, “that if lost, would have far reaching repercussions.” X

What You Can Do To Help:

1. Attend the fundraising dinner on April 19 in Seattle at the The Mountaineers Seattle Program Center. Tickets are $100 each and there will be a live and silent auction.

2. Buy a T-shirt or a mug from the Snohomish County Helicopter Rescue Team.

3. Make a donation of product, service, money or time.

For more information on all of these options, log onto www.helicopterrescue.org.