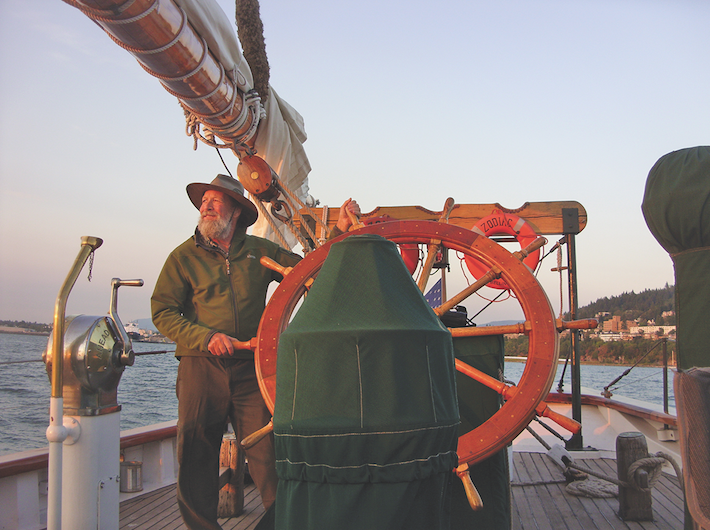 on the tall ships of yore

The Lady Washington and Hawaiian Chieftain
When I arrived in Bellingham in the late 1990s as a landlubber from Montana, I was fascinated with all things coastal, including the area’s rich history of discovery and commerce by intrepid adventurers and sailors. Although some historians contend that Spanish explorers arrived in 1640, the first well documented European ships to visit the area were those of George Vancouver’s voyage in 1792.
But the grand age of sail is all in the past, right? Or so I thought. That first summer by the bay I was lounging in a deck chair one sunny afternoon when a tremendous “BOOM” rang out across the bay; then another, and another. Cannon fire? I leapt from my seat and ran to get the binoculars. I gazed in shock and disbelief as two grand ghosts from the past came into focus, engaged in what appeared to be a full-scale naval battle.
The Lady Washington and Hawaiian Chieftain sail into Bellingham Bay at least once each summer to offer a full slate of adventure sails, mock battles and tours. The Lady Washington is a traditionally built replica of the first American vessel to make landfall on the west coast of North America in 1788. With two square-rigged masts, the brig was used in the first Pirates of the Caribbean movie because she has the distinctive, classic look of a tall ship from the 1700s.
The Hawaiian Chieftain would also pass as a ship straight out of the colonial age, but unlike the Lady Washington she is a topsail ketch. Built in Hawaii in 1988 and based on the designs of early colonial coastal trading ships, she has a very shallow draft that allows her to enter small ports.
Both these ships offer quick sailing excursions. While the short adventure sails are a fine introduction, those with more time on their hands can sail on port-to-port passages from half a day to more than a week. These transits are far less formal, and are a great way to get a behind-the-scenes look at the life and jobs of a tall ship’s crew.
A friend and I sailed on the Lady Washington from Anacortes to Cornet Bay one fine spring day. We shared a breakfast of eggs Benedict in the galley with the youthful crew before the trip got underway, then all hands headed out on deck as we threaded our way between Fidalgo and Guemes islands and out into Rosario Strait. Being the only guests on board was a treat, as we had plenty of time to quiz the crew about how the vessel was rigged, try our hand at the wheel and even climb the rigging and help fire the ship’s cannon.
Sailing this majestic ship under the Deception Pass Bridge and into the protected waters of Cornet Bay was thrilling. Once inside the bay we were greeted with a salvo of cannon shot from a house high on the western bluff, and briskly returned the salute.
The Lady Washington and Hawaiian Chieftain will be in Blaine from July 29 to August 3. More information about adventure sails can be found at historicalseaport.org.
The Zodiac
The Zodiac is a 160-foot two-masted schooner that plies the waters of Bellingham Bay and the San Juan Islands from March through November each year. She offers a variety of day sails and longer tours. The winemaker’s dinner cruises around Bellingham Bay are a fine way to wind down a long-summer’s evening. More adventurous souls can book a three-day or eight-day trip to the San Juan Islands or Desolation Sound. For more information, go to schoonerzodiac.com.

The Maple Leaf
North of the border? Try the Maple Leaf, a 92-foot schooner built in 1904 in Vancouver Shipyard at Coal Harbour. Initially a pleasure yacht, she was converted to a halibut fishing boat during World War I, and  was restored in the 1980s. Maple Leaf Adventures offers multi-day trips to the Gulf Islands, Great Bear Rainforest and Haida Gwaii (Queen Charlotte Islands) each summer. For more information, go to
mapleleafadventures.com.

The Community Boating Center
For those who want to learn to handle a sailboat on their own, Bellingham’s Community Boating Center (CBC) is the best deal in town. They offer classes that cover all of the basics, from rigging the sails and getting the boat underway to tacking, jibbing, trimming the sails and docking.
After completing the class you’ll be certified to check out a comparable boat from the CBC or any other US Sailing Center. Signing up for an annual pass entitles one to unlimited use of the Center’s Boats when they are not being used for classes. The Community Boating Center is open May through October each year. For more information, go to boatingcenter.org.   x