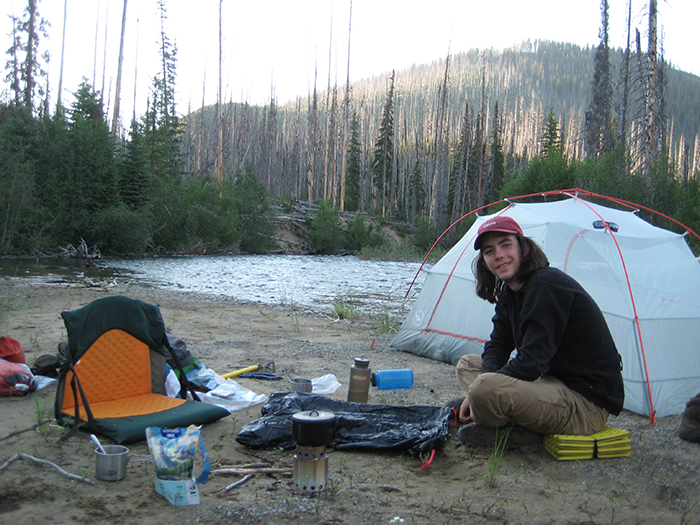 Story and photos by Kasey Bell

After turning 59, I began thinking that I should celebrate turning 60 by spending 60 days in the wilderness. I decided to break free from my usual linear and circular styles of hiking and try to do more of a freestyle meander between resupply points. My general plan was to start on the east side of the Pasayten Wilderness, head west to the Pasayten River, then south with resupplies at Mazama, Stehekin, Stevens and Snoqualmie passes. I wanted to immerse myself in my home mountains for a longer and introspective journey, try to go on trails off the Pacific Crest Trail (PCT), and try to get a sense of the current wellbeing of the North Cascades ecosystem.

Looking back, a little trail research ahead of time would have been helpful. I knew that parts of the Pasayten Wilderness and other eastside trails had burned. I had no idea how extensive it was and how badly the burns had affected trail conditions.

Things started out fine on the first 12-day leg, on which my 17-year-old son, Finley, joined me. We started from the Iron Gate Trailhead through a mix of burned and unburned forest for the first three days, culminating with a spectacular stretch from the larch forest on Apex Pass, angling north to Cathedral Pass, and down to Cathedral Lake. Here we had our only rain on this section with a thunderstorm that flattened our tent early the next morning. The skies cleared and we had a vista-filled scramble up the shoulder of Cathedral Peak that morning. The view made us feel like we were in the center of a vast wilderness, with the exception of the border swath running with relentless straightness on the 49th parallel just to the north.

That afternoon we began a descent into what began to feel like the edge of Mordor. We had started on the solstice, and now, even at 7,000 feet, the temperature started to ratchet up as the 2021 heat dome pushed its way into the Northwest. On top of this, the forest for the next six days turned out to be almost all burned, with just small patches of alpine trees left living. The only bright point we had forest-wise was after a particularly grim descent to the Ashnola River. We found a patch of green from the 12-foot living shoots of aspen trees, sprouting up from their roots. Up on Sheep Mountain even some of the high-altitude heather had burned.

The last of the alpine on this stretch of the Boundary Trail was on Bunker Hill, where we took refuge in the shade of some alpine firs and cooled ourselves with snow packed under our hats. This is where I wanted to head off the Border Trail and go south toward Hidden Lakes, but luckily we ran into a trail crew that advised against this as that trail had not been maintained in years and was 100 percent burned.

The next morning found us descending along a faint ash-coated trail, crawling under or climbing over blowdowns the whole way to the Pasayten River crossing. This we reached at midday with the temperature already in the 90s. I followed Finley, who boldly headed into the high and swift ford. The water gradually deepened until it was nearing the top of my thighs. I imagined a scenario of my foot giving way on a slippery stone, the fast current pulling me into the freezing water, having to wriggle free of my pack and then watching it get swept to Canada as I struggled not to drown.  Luckily, we both emerged safely into, yes, more burned forest on the opposite bank. Trudging south in punishing sun we searched for shade and finally found a 15-foot live pine tree to huddle under for the afternoon as the heat hovered in the high 90s.

The following morning was more of the same: Extreme burnt blowdown challenge. This went on for five miles until the trail junction to Frosty Pass, and we saw living forest on the other side.

We crossed the old airfield and U.S. Forest Service camp and continued south through intact, beautiful forest. We camped that night at the Upper Pasayten River crossing, where we met some PCT southbound thru-hikers, “Bunkhouse” and “Spud,” who were detouring around some dangerous snow on the regular route. These were the first hikers we’d seen other than the trail crew in five days. The next few days took us up over Robinson Pass and down the trail to Mazama and the comforts of the Mazama Store.

Part two of my hike started that same afternoon with my wife, Marjie, my sister Natasha and our friend Andrea joining me for the nine-day trek from there to Stehekin. 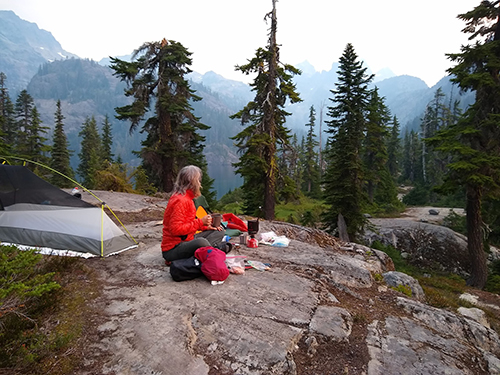 Our route took us up the Cedar Creek trail, five miles up the highway from Mazama, which offered good trail, shade and a couple of nice creek-side campsites on the way up to Abernathy Pass. Tragically, this whole valley burned a week later.

On the other side we camped at a buggy North Lake, and then wrapped our way over to Twisp Pass, camping at a lovely view site a couple of miles below the pass. A calmly foraging black bear kept us company.

Highlights of the rest of this section include a day trip up to Stiletto Lake, some rainy and cool weather at Dagger Lake, and getting into beautiful old-growth on the trails down toward the PCT and back up to McAlester Lake.  Then down to Stehekin, with the scenic Rainbow Creek trail putting us just a mile from the famous bakery.

Part three started with a boat trip down the lake from Stehekin to Lucerne. There I waved goodbye to my trail mates and started solo with 13 days of provisions, up toward Emerald Park Pass over, yes, more burned forest and blowdowns. Luckily, I ran into another trail crew, who were clearing the route to Domke Lake, who told me that the trail to the pass is mile after mile of burns and blowdowns, with much the same in the Entiat River Valley on the other side. Disheartened, I spent the night up at Domke Lake, where I met Sid, the 71-year-old owner of the now burned-out Domke Lake resort, a casualty of the 2015 fire here. He reminisced about the days when the lake was a popular summer camping destination.

The next day I retreated to Lucerne and caught the shuttle up to Holden Village, with the idea I would abandon my previous plan to go around the east side of Glacier Peak. Instead, I would head west out of Holden and connect with the PCT. I spent my first night at Heart Lake, then did a side trip up to the glaciated valley of upper Lyman Lakes. I ran into several groups coming over Spider Gap, everyone doing a loop that picks up the PCT and then heads back down over Buck Creek Pass. I rested in my camp for the afternoon, watching with slack-jawed horror at one point as a rockfall came down from the cliffs above me and passed about 50 yards from my tent.

I connected up with the PCT the next day, staying on it for a few miles before taking a detour over to the famous Image Lake. I remember stories from my youth of this scenic spot overrun with campers but after an amazing alpine meadow traverse, with marmot accompaniment, I was astounded to find that I had the campground all to myself. I spent some meditative time with the salamanders by the lake and then met a few other hikers, Scott and Erica, forest rangers on vacation from the Darrington Ranger District who generously gave me the detailed map I needed to go around the west side of Glacier Peak with confidence. I also met Russ, volunteer ranger at the Miners Ridge Lookout. He invited me to visit the next morning. It’s an amazing lookout with a lot of history.

He shared the experience of surviving a lighting strike in the lookout, which caused the knife his wife was chopping vegetables with to fly across the room. He also filled me in on the history of the Kennecott Copper Corporation mine, a proposal in the 1960s that would have put an open pit copper mine just a few miles up the ridge, thankfully thwarted.

My experience with the folks I met at Image Lake reflected one of the main takeaways I have from the trip: Mountain people are super friendly. I think this is our natural state, but civilization makes us edgy.

On the PCT this theory was frequently validated. I met a series of extremely kind and nice people, like “Hammer,” my first northbound thru-hiker, and southbound thru-hikers like Robert, Mary Ellen and “Calzone” along with various happy groups and solos out for shorter trips.

The way west around Glacier Peak was epic with the mountain revealing its various sublime faces with each ridge, incredible old growth down in the Suiattle River basin, and ethereal alpine campsites. It was nice to hike on some rare snow around Mica Lake and Fire Creek Pass. Views to the west of Sloan Peak made me nostalgic for a climb I did there 40 years ago. 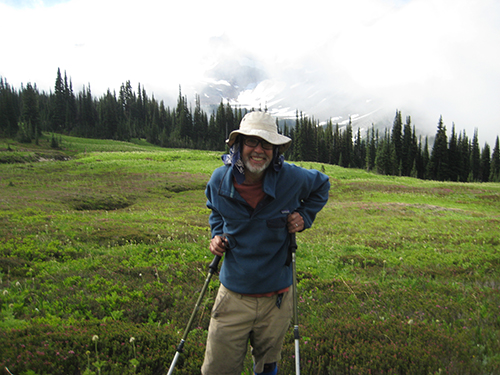 The hike from Glacier Peak to Stevens was notable for a series of classic crest ridge walks and intact and healthy upper montane forest of what looked like pure mountain hemlock. I had a refreshingly cool and breezy camp at Lake Sally Ann and a camp with record clouds of mosquitos at Pear Lake. Views of Mt. Rainier became stronger as views of Glacier Peak diminished.

The last piece of my wilderness sojourn began, after rest and resupply, with my friends, Pat and Julie, and my sister, Natasha, joining me as we climbed, in what used to be typical cascade drizzle, up through the Stevens Pass Ski Area. Thus, began day 35 of my quest, heading south on a classic part of the PCT from Stevens to Snoqualmie, a beautiful section with an assortment of lovely lakes. We camped and swam at Glacier Lake, which had schools of fish feeding on the surface; Waptus Lake, windy and warm, and Spectacle Lake, set in a valley of smooth boulders that reminded me of the High Sierras. We met more great people, such as “Sandstorm” who sat with us for dinner while sharing tales of his thru-hike north so far. Our wildlife highlight was a marmot with two pups taking turns nursing and playing in a boulder patch just off the trail. The last few days had us in smoke from a fire south of Snoqualmie Pass. This didn’t diminish the coolness of the Kendall Catwalk.

In the end, I didn’t make my goal of 60 days. This was partly a logistics error, partly missing home and family, and partly appreciating hiking with company more than hiking alone. I headed home on day 41, rich in trail lore and with a greatly deepened appreciation of these mountains, with their precious forests, glaciers and snowfields, rivers, lakes and wildlife, that have been the backdrop of my life.   x

Kasey Bell is a sixth-grade teacher who lives in Deming, WA. He gets outside every day he can.