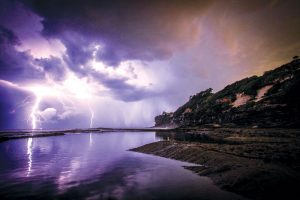 Just as my wife and I gained the summit of Mount Elbert, Colorado’s highest peak, I pulled back my hood and heard a bewildering noise. It was a constant, high-pitched buzzing and static-like sound, just like you would hear if you were standing directly below high-voltage power lines. I thought my oxygen-deprived brain was causing me to hallucinate.

When my wife pulled back her hood, her hair stood on end and she said her head felt like it was crackling. She also thought her ice axe, which was strapped to her backpack, was poking her in the back, but it was actually sparking against a metal zipper.

We’d heard stories of buzzing sounds on summits, which is a sign of imminent lightning, but we didn’t expect to experience it on a snowy day in early spring. It didn’t take long to figure out we were in the midst of a rare phenomenon known as thundersnow: a winter thunderstorm that produces snow instead of rain. We immediately descended as fast as we could down snow-covered talus, dropping 3,000 vertical feet back to the slightly safer forest in less than half an hour.

Thunderstorms are created when unstable, warm and humid air rises into cooler air masses, creating convection. When the air condenses, cumulonimbus clouds form, which can lead to thunderstorms with gusty wind, heavy rain (or no rain), hail, and sometimes, like that day on Elbert, snow.

Lightning zaps the ground more than 20 million times a year in the United States. Fortunately for those of us in the Pacific Northwest, most of those strikes occur in the Southeast. The most dangerous state is Florida, which averages 10 lightning-related deaths every year.

That rarity, however, can lead to a lack of awareness and understanding about how to behave during an electrical storm. Just like our thundersnow experience in Colorado, the thunderstorms in Washington always surprise me because they’re so infrequent. But what surprises me even more are all the hikers I see continuing up trails during these storms.

My wife and I learned to fear and respect lightning while living in Colorado, where it’s common in the summer. Even though we live in Washington now, lightning is still on our minds every time we hit a trail and we have aborted a few summit bids due to impending storms, including a climb last year on Mount St. Helens.

Their eyes were wide and dilated and they told us they had just been struck by lightning near the crater rim.

The weather forecast wasn’t ideal, but we didn’t have the luxury of waiting for a better weather window because we had single-day permits. After delaying our start time a couple of hours the weather seemed to improve, so we decided to give it a go. Under a light rain, we started up the trail with our eyes glued to the sky. Things were going pretty well, but then, just as we neared the timberline, we heard a few rumbles of thunder.

Experts say if you can hear thunder, you’re close enough to be struck, even if the heart of the storm is 5 to 10 miles away. So after hearing another round of rumbles, we decided the climb just wasn’t worth the risk. After all, nowhere outside is truly safe during a thunderstorm and a treeless alpine zone is one of the worst places you can be.

Just as we were about to turn back down the mountain, we met a couple descending from the summit. Their eyes were wide and dilated and they told us they had just been struck by lightning near the crater rim. Based on the fact that they were alive and seemed OK, I figured an indirect ground current, such as a “side splash” or a shock wave, hit them. She was knocked off her feet in one direction and he was knocked unconscious in the other direction, they said. After convulsing for a moment, he came back into consciousness.

Hundreds of people are hit by lightning every year, and based on Weather.com data from 1985 to 2014, 49 people are killed on average. Most victims are engaged in outdoor leisure activities, especially fishing, soccer and golfing. Surprisingly, only 10 percent of those who are struck by lightning are killed, but more than two-thirds of survivors suffer from lifelong debilitating injuries.

The best way to survive a thunderstorm, of course, is to avoid it altogether by checking weather forecasts and paying close attention to the sky while you’re outside. But if you spend enough time outdoors, you will probably find yourself in a thunderstorm at some point. How you respond to it might save
your life.

If you ever find yourself in a thunderstorm:

Your top priority should be to immediately get down from elevated and exposed areas such as peaks, ridges or open fields and back to the safety of a building or a hard-topped vehicle. Tents offer no protection. Hard-topped cars with the windows rolled up offer great protection as long as you do not touch any metal parts. Cars can still get struck by lightning, but the current usually passes around the metal frame and to the ground. It’s a myth that a car’s rubber tires prevent the vehicle from getting struck.

Avoid all bodies of water.

Never lie flat on the ground during a thunderstorm. Previously, the crouch method was recommended, where you crouch into a ball and balance on your feet with your head bent forward and your hands over your ears. This puts you low to the ground but not flat, where you’re more susceptible to ground currents or strikes passing through your vital organs. The National Weather Service stopped promoting this method, however, saying it does not provide a significant level of protection. It is better to seek shelter.

Do not shelter under tall or isolated trees. When lightning strikes a tree, voltage can fan out from its base. It’s better to be in a dense stand of shorter trees, but you should still put as much distance between you and the trees as possible.

If you’re in a group, spread out to avoid everyone being struck by the same bolt. If someone is struck, others can resuscitate. Try to be at least 20 feet apart, but make sure everyone is within hearing distance.

Never use a cliff, cave or rocky overhang for shelter, as lightning can follow contours and travel inside.

Metal objects such as ice axes and trekking poles do not necessarily attract lightning strikes (unless you’re holding them up in the air), but they are excellent conductors of electricity. Rather than wasting time shedding gear, focus on getting yourself to a safer location.

Keep a constant watch on the sky, as thunderstorms can develop rapidly.

Follow the 30/30 Rule: After a lightning flash, count the seconds until you hear thunder. If it’s less than 30, seek shelter indoors. Then, do not go back outside until 30 minutes has passed since the last lightning flash.

The National Weather Service stresses that there is no safe place outside during a thunderstorm. If you hear thunder, lightning is probably close enough to strike you. Remember the phrase, When thunder roars, go indoors.  x 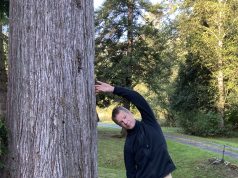