Most popular bike races are long. The Tour de France is about 2,082 miles this year, with an average stage length of 105 miles; the Seattle to Portland is more than 200 miles and Ride Around Mount Rainier in One Day is 152 miles.

Ride 542, which ran between 2003 and 2013, just needed 24 miles – from Glacier to Artist Point – to gain a following. And it only went uphill, making it especially popular among those who enjoy mental and physical challenges, epic views filtered through a soaring sense of accomplishment and, possibly, delirium.

Between the challenge and the opportunity to ride a one-of-a-kind stretch of road with no traffic, many cyclists were sad to see the race go; Whatcom Events, the nonprofit behind Ski to Sea and other events, regularly got requests to host a new version of the race.

“We have been approached a bunch. I’m sure Charlie [Heggem, founder of NorKa Recreation, which formerly hosted the race] has been approached a bunch too,” said Anna Rankin, Whatcom Events race director. “The highway is so iconic. Combine that with the fact that you have the opportunity to ride 542 with no traffic, I mean, that just doesn’t happen.”

Whatcom Events heard the cyclists loud and clear, and will host the race on Sunday, September 9.

The race will be nearly identical to Ride 542, but with a different name and a slightly different start. Instead of starting in downtown Glacier, the Mt. Baker Hill Climb begins at Snowater Road, just east of Chair 9 Woodstone Pizza & Bar, making the race logistically simpler and easier on Glacier residents.

That won’t make it easier for the riders, however. Andrew Berg, who competed in Ride 542 three times between 2007 and 2010, said the course can be broken into two distinct sections – a flatter section between Glacier and the Shuksan DOT Station, and the final 11 miles between there and Artist Point.

In the latter section, the road climbs from about 2,000 feet to more than 5,000 feet with an average grade between 4 and 5 percent, according to a DOT spokesperson, and plenty of sections that reach 7 percent.

“It’s pretty grueling, but it’s over pretty quick,” Berg said. “The destination is really cool. You get to Artist Point and you look around and you’re at the top of the world and you realize you got up there on your own.”

In total, the route climbs about 4,000 feet, besting the world 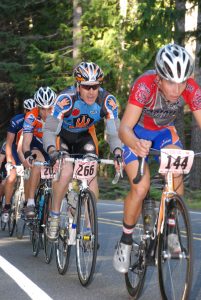 famous Alpe d’Huez, in the Tour de France, which climbs about 3,700 feet over nearly 9 miles.

“The burn and the challenge has got to be what appeals to the elite athletes,” Rankin said. “Just driving down that stretch of the highway sometimes scares me.”

The original race did attract elite athletes: past winners finished the race in about one hour and 20 minutes, averaging 18 miles per hour over the course. That’s a respectable speed for most people on a flat road.

But it’s not just for elite athletes. The Mt. Baker Hill Climb will have three divisions: a social ride starts at 7 a.m., a recreational division leaves at 8 a.m. and com

The highway will close from 7 a.m. until noon, which should leave time for racers to ride down the hill while it’s still closed, Rankin said. A shuttle will be running to take gear from the start to the finish line, and to bring people and gear (including bikes) from the finish line back to the start after the race.

The winner in both the male and female categories gets $250, second place gets $100 and third, $50. The top male and female in each of four age divisions also win a jersey.

Race entry costs $80, with the proceeds going to Lydia Place, a Bellingham nonprofit that provides transitional and permanent housing and other services.