The Art of Shralpinism: Lessons from the Mountains

In “The Art of Shralpinism: Lessons from the Mounatins,” legendary snowboarder and climate activist Jeremy Jones has created an elegant fusion of memoir, manifesto and mentorship that is required reading for backcountry snow enthusiasts, but should also be given to every high school graduate.

Shralpinism, a portmanteau of shredding and alpinism, is about balance, Jones writes in the prologue, a “mix of gusto and humility, fearlessness and fear, grit and sensitivity.” It is about an intimate connection to the mountains, knowing yourself and your partners, and a deep understanding of all things snow.

The main narrative takes us from Jones’ early years as a racer, through his career as the preeminent star in extreme snowboarding films, to his transition to foot-powered backcountry riding and emergence as a climate activist. Driving this evolution is his recurring mantra: Stagnation is not an option. When he sees himself losing the spirit of wonder and curiosity that animates his art, he finds an opportunity for growth. 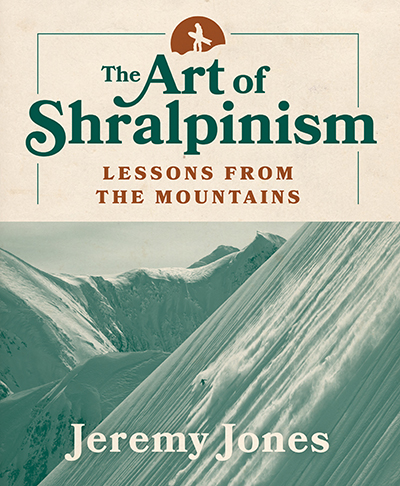 Jones shares a lifetime of learning in under 300 pages. Beyond sharing his own commitment to personal progression, Jones shares with readers how to grow their own skills as shralpinists. Lists and skill-building sections complete with hand-drawn diagrams tackle everything from turns to avalanche safety: gear, fitness, nutrition, mindset, backcountry camping, route planning, reading snow.

Throughout the book Jones shares the lessons he has learned along the way and the people from whom he learned them. There are frequent sidebars highlighting mountain guides, skiers, snowboarders, surfers and other athletes who have been his mentors, teachers, partners and friends.

He also tackles thornier issues like the difference between healthy and unhealthy fear, minimizing risk while pushing the limits and the importance of being able to turn around. He writes about using language to establish for himself and his partners that plans will shift if conditions aren’t right by saying, “I’m going to take a look at the line,” instead of, “I’m going to ride the line.” Making it down safely is always the primary goal.

The heart of the book is Jones’ own artwork, poetry and journal excerpts. They are personal and intimate views of his passion for mountains and nature, close calls and razor-thin margins of error, and “white moments” of pure joy.

The exuberance is contagious. The close calls are chilling.

An excerpt from a seven-day trip in the Sierras, vivid and present enough to make you feel mountain air in your lungs, ends with “sucked every last drop of marrow out of the day.” Aaaaah … His description of a nearly disastrous descent of the Tusk in the Chugach Mountains of Alaska has his brother quietly saying, “I don’t know about that,” over the radio after Jones squeaks a high-speed heel turn out of the path of sluff crashing toward a cliff below. Aaak!

Jones has seen the effects of climate change firsthand, especially in Alaska where 25 years ago he found his place to break new ground. He has seen rain falling on a mountaintop in January in his home range, the Sierras. “The mountains are changing,” he writes. He formed nonprofit Protect Our Winters in 2007 with the goal of creating an “Outdoor State,” unifying the millions worldwide who treasure outdoor recreation to take action on climate change with their voices, and their votes. One percent of the sales of “The Art of Shralpinism” will benefit Protect Our Winters.   x

Meg Olson is the co-owner of the Kingfisher Bookstore in Coupeville, which has a bit of everything but specializes in the natural and human history of the Pacific Northwest. She likes to explore, in person or on pages.