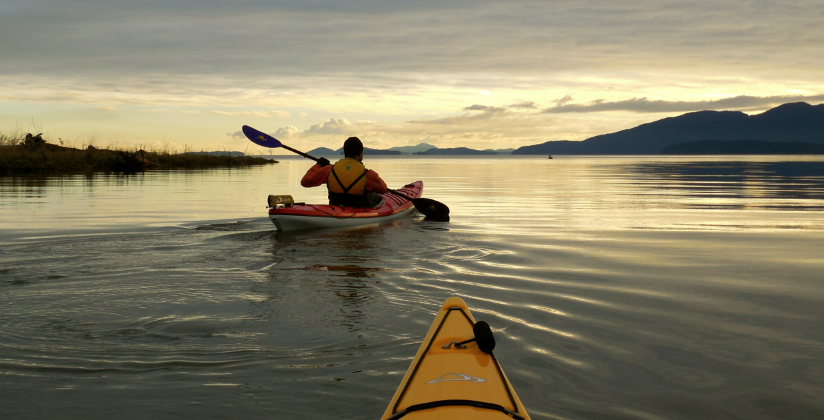 As a modern-day explorer and sight seeker, I’m constantly looking to immerse myself in the flora and fauna found in our collective backyard. Or is it our front yard? From my daily view of Bellingham Bay, the meandering, sidetracking mouth of the mighty Nooksack River seems more like the latter.

Visible from Lummi Shore Road, the Nooksack washes sediment down from the mountains and through the valley until it widens out to form a delta on the north side of Bellingham Bay. Deltas form as alluvial-laden rivers release their cargo as they encounter an open body of water. The river water slows as it encounters the resistance of tide and ocean current. As the velocity slackens, sand and silt drop to the riverbed, a delta is born and destined to evolve throughout its life.

The Nooksack River delta possesses a set of fingerling channels. An aerial view of the delta looks like the roots of a tree reaching deep into the earth, attempting to find a solid anchor. But these “roots” erode the land they penetrate, so the landscape is constantly in flux.

My geologist friend Al Ragan and I paddled the outskirts of these calm waters a year ago. The flexing and fluctuation of the river piqued our curiosity. We wanted to explore where the Nooksack River travels as it connects with and empties in a dynamic dance of water and land at the edge of the bay. We researched a round-trip route and timed the tides so we could circle the delta’s evolving islands.

It was mid-January and the river was high but had receded from floods weeks earlier. We launched our kayaks and paddled upstream into the eastern side channel downstream of Silver Creek. A rain only lasted for a few minutes and the wind was on vacation. The blanketed sun showed no signs of brightening our day and we remarked at what a strangely beautiful day it was in a dull, drab and non-photogenic sort of way. It was one of those Pacific Northwest days that Tom Robbins described: “… when the sky resembles bad banana baby food … and the witch measles that meteorologists call ‘drizzle’ are a chronic gray rash on the skin of the land.” Seriously.

As we entered the main channel at the logjam peninsula a large bald eagle was strategically standing sentinel, with others scattered amongst the trees in the distance. They were not intimidated by our presence, nodding approval as we floated past their posts. Eagles are obviously at the top of the food chain, as demonstrated by the decapitated duck carcass left on display.

We planned to stay right and follow the main channel as it empties out on the east side of the bay past Fish Point on the Lummi Reservation. Calmly drifting downriver we witnessed how the river is redirected into new channels as old routes become clogged with debris and the delta fills in over time. The main channel used to flow into Lummi Bay on the west side of the peninsula where the Lummi and Red rivers still leak out. We had been told that man had long ago rerouted the river to where it now empties out in the protected bay.

The banks of the delta are covered with freshly downed trees and chewed limbs gathered by beavers to build their lodges deeper in the woods. Their little footprints fresh in the sand made me wonder about  their whereabouts. The silence surrounding us was broken only by birds calling out and the sound of the water rushing past branches that hung into the river.

When I first heard a loud “plop!” I thought it was a big fish. Then I saw the culprit – large chunks of sand dropping from the river’s deep-carved edge as if demonstrating how sediment is added to the riverbed. The seasonal abundance of geologic slough makes the river look like a soupy mudflow winding its way through the countryside.

Just before Fish Point we followed a smaller channel to get closer to the inside passage of the delta. Immature and adult bald eagles glided the across the delta and congregated en masse close to Lummi Shore Drive. They perched comfortably on dilapidated pilings built to hold log booms before they were floated downstream to nearby sawmills. Their calls echoed across the bay as we exited at the river’s mouth.

A timely tide provided enough draft for us to cross the delta as we searched for the eastern channel to make our return. The middle channels are impassible once you get up to the old logjams. The opening is elusive and finding the passage takes patience and local knowledge. A hard 90-degree left signaled we were on track. With almost effortless paddling upriver, we were back at our starting point.