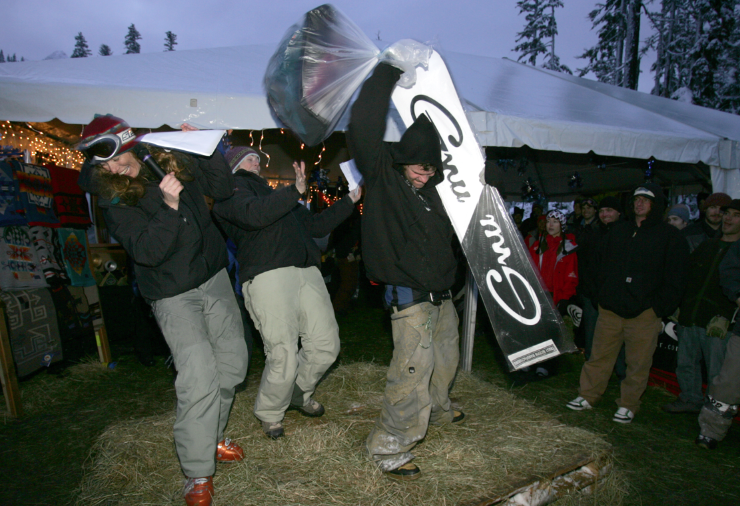 “Dude, are you kidding? The Legendary Banked Slalom? It’s the original and longest-running snowboard event on the planet, the annual gathering of the tribe! How have you
missed it?”

This was the general reaction from most of my snowboard peers when the subject of Baker arose. It was December 2005 and I was getting the impression I had to make the pilgrimage up the Mt. Baker Highway to be accepted by the snowboard community.

Two months later I got the full Baker experience, living in the ski area’s parking lot for three days during the 2006 LBS. Krush Kulesza, the youth marketing director from Summit at Snoqualmie, had put together an RV for some friends and team riders. I lucked out and snagged the photographer’s spot in the rig once I got myself to Baker.

I learned a few lessons that first year, and the first was to never leave a Volkswagen Golf in the Mt. Baker parking lot for three days in February. Perhaps this year would be an exception, but every other year in history it is a poor idea. Arriving at the lot I was greeted with concerned looks directed at my mode of travel.

At six the next morning, the windows in the unheated RV were like waterfalls of condensation, and it took nature’s call to get me out of the warm sleeping bag into a 38 degree environment with 99 percent humidity. I had to go, but why wouldn’t the door open? Pushing harder revealed a couple feet of snow fell overnight, blocking the exit. After a struggle I made my way to the White Salmon Lodge bathroom only to find the lodge wasn’t open to the public yet.

Heading back to the RV I couldn’t see the Golf. Walking around I eventually bumped into it, but it was almost undetectable as a car – totally buried and not going anywhere without some serious digging. I went to work with a shovel, remembering the concerned looks from the previous day. Lesson learned. 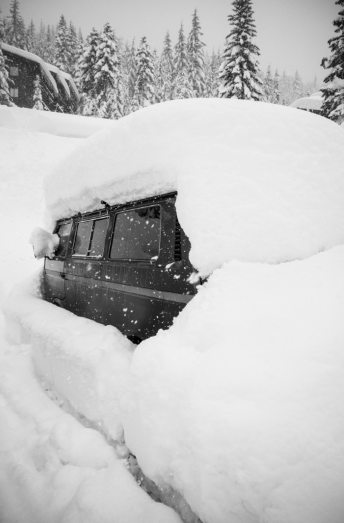 Next I learned that nobody who goes to Baker during LBS wants to shoot photos when the snow conditions are as legendary as the race, especially if they have a shot at the coveted bronze, silver and gold rolls of duct tape. People go to ride world-record snowpack and race. Everyone in the RV except me had a shot at the tape, at least for the first two days.
I spent the majority of the first day posted at the racecourse, striking out on any really interesting shots. I couldn’t get a decent angle without a media pass, and my focus was divided between the course and the awesome-looking ridge (the Shuksan Arm) behind me.

Late in the day as I zoomed in on team rider Stacy Thomas with a new, very expensive lens, it simply fell apart in my hands. Stacy flew by spraying snow, as I looked down confused. Half the camera and lens were in my right hand and the other half were in my left, while the leftover parts disappeared into the snow. What just happened? My only zoom lens was dead, which meant limited photos and $1,500 wasted. I could almost hear the snowboard gods telling me to go play in the snow.

Later that evening the mood in the RV was race-focused. Those who had already qualified for finals were hungry to run the course again, while those who hadn’t were focused and determined on their one remaining chance. I don’t think anyone slept well that night.

The following morning the Golf had disappeared again under another 3 feet of snow. In hindsight, I was falling in love with Baker. I hadn’t realized how good snowboarding could be, and conditions were screaming at me to join in and put the camera away. Nonetheless, I remained focused on looking for LBS story content for day two. Again, it was an exercise in futility; no one wanted a photographer directing them with conditions so good and a race to focus on.

The mood in the RV shifted that night. Half the people in the RV had qualified for finals. The other half temporarily transformed from focused racers to raging alcoholics. Alcohol debauchery ensued with contests revolving around unusual food/alcohol combinations, and painfully wrong mixers such as beef bouillon, skittles, vodka, tequila, raw eggs… you get the idea. Money was on the table if you could keep it down, and it still makes me laugh to think back to that night. 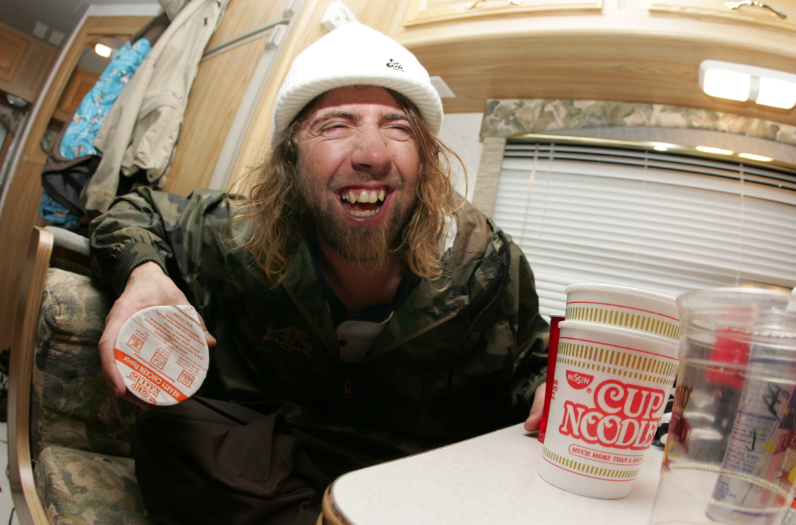 The following morning I awoke to the Golf under another 18 inches of fresh snow and began the morning excavation routine. It was Sunday, finals day, and the energy was palpable.

If you can only make it to the Legendary Banked Slalom for one day, let it be finals on Sunday. All day, the feeling that the entire snowboard community has gathered in one place is powerful. The people who shape the industry are all there riding Baker together, having a good time. Two of the RV crew made it through finals and managed to win the coveted Duct Tape Trophy in spite of the alcohol Olympics that took place 12
hours prior.

At the awards ceremony, the White Salmon Lodge is standing room only. You may find yourself packed shoulder to shoulder with Terje Haakonsen or a Mt. Baker local, both of whom are likely holding a roll of tape with just as much pride as an Olympian wearing a gold medal in front of millions. For snowboarders at LBS, the size of the audience doesn’t really factor in; it’s the community in the audience that matters. I had found my tribe.   x