To steal a quote from Zoolander, “That Liz Daley … She is so hot right now.”
A Patagonia snowboard ambassador, American Alpine Institute guide and Jones Snowboards team rider, Daley had a banner year in 2013, hosting her own series on EpicTV and guiding on Mt. Baker, the Cascades and spending time in Chamonix. She’s back in France now, planning major objectives in the Alps and knocking them off one by one.
Her perma-grin and blonde hair are easily recognizable in the pages of snowboarding media, but it’s her fearless accomplishments in the mountains that stand out. She was the first woman to descend Mt. Baker’s Coleman headwall on a snowboard, and has also summited and shredded Mont Blanc.
Liz is on the cover of this issue. We thought we’d take the opportunity to introduce the rider on the cover, and Liz responded to our questions from France. 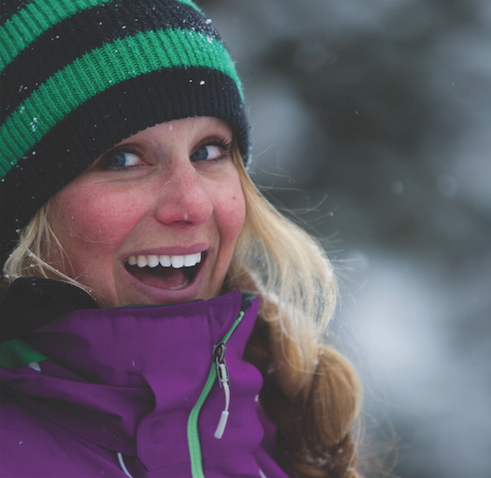 MBE: Your title on your website is “Mountain Slayist.” For those who don’t know what slaying big lines means, what exactly do you do for a living?

LD: Well, I guess “slayist” means one who gets rad in the mountains, climbing epic routes and riding big lines, usually succeeding in their efforts. I slay mountains in my free time but I mountain guide for a living. I still slay as a guide but on a different level – it’s all relative I guess. When a client finishes my trips I’m sure they see themselves as mountain slayists as well.

MBE: How long have you been a snowboarder, and how did you get into the sport?

LD: I started snowboarding when I was 10. My parents aren’t mountain people so they couldn’t grasp my urge to get to the mountains. They also couldn’t afford it. My auntie Janet bought me my first snowboard and my grandpa bought me my first kit and they sent me up on the ski bus every weekend for lessons.

MBE: Is guiding more of a means to make a living in the mountains, or a passion in its own right? How did you become a guide?

LD: It’s both. I’ve never seen myself working a job I hated. Happiness and quality of life have always been more important to me than money. Being an athlete half the year and a guide the other half has been a huge sacrifice in many ways. I’m not living a “normal” life full of all the comforts of a secure job, a home and consistent income, but I’m privileged in many ways. I’m living a pretty dream life, I get to travel, make my own schedule, be outside in the mountains all the time and create awesome experiences for others with the same passion.
I was an environmental education major at Western Washington University. After graduating I pretty much dedicated four years to climbing and riding in Europe and all over the western United States, learning on my own and getting a lot of experience. After spending time in Chamonix I knew I wanted to become a guide, so I came back from Europe, got my Emergency Medical Technician certificate, worked on ski patrol for a season and got a guiding gig at American Alpine Institute the following summer.

MBE: What are some memorable highlights from your snowboarding career?

MBE: You’re also a climber. Where are your top three places to climb in the Northwest?

MBE: When you’re not riding, climbing or guiding, what do you like to do?

LD: Hang with family and friends. Go to shows, happy hour and karaoke; bake, go out dancing, get
pedicures.

MBE: Are there any trips or projects in the works you’re excited about?

LD: I just got to Chamonix so I’m pretty excited about my winter over here. There are still so many lines on my hit list I’ve been dreaming of for years. I might be going to Alaska in the spring, which would be awesome – I’ve never been. A horseback trip into the Wind River Range is in the mix as well. We’ll see what unfolds.

MBE: What can a client on one of your trips expect?

LD: I have a few courses. There’s a Mt. Baker three-day summit trip and a Mt. Baker five-day, which is more skills intensive and more riding of peaks in the area. Then I have a five-day Washington Pass peak-bagging mission, and in that trip we summit and shred three, perhaps four, classic mountains in the North Cascades.
I have a splitboard/ski mountaineering course in the North Cascades where we have a day of rock climbing in Mazama followed by a splitboard/ski approach to some classic alpine routes where we climb some splitter granite, rappel off and shred down. I also have a nine-day volcano mission that is both objective and skills based where we summit and shred Mt. St. Helens, Mt. Adams and Mt. Baker.
A more “skills intensive” course includes things such as crevasse rescue, partner and self rescue from a crevasse, roping up on a glacier, terrain selection for ascending and descending in hazardous terrain, beacon practice and evaluation of subjective and objective danger. Summiting the Cascade volcanoes and shredding down around 7,000 feet of perfect corn is so cool, it really doesn’t get old. I had a couple guys from Utah tell me last year that my Mt. Baker course was the coolest thing they had ever done. That was pretty awesome.

MBE: Mountain guiding is currently a male-dominated pursuit. Do you have any advice for women who are thinking of guiding as a career?

LD: It’s definitely not an easy way to make a living. It’s really physically and mentally challenging, but the rewards are huge. It’s especially hard in the Cascades because the weather can be so demoralizing, but when it’s good I wouldn’t want to be guiding anywhere else.
There are a lot of misconceptions about guiding. I don’t think it’s an issue of gender; either sex can guide, and you don’t have to be the strongest or the best climber, or the best skier, but you do have to be able to facilitate a great time, work well with people and make good decisions in the mountains.
I would tell them not to think about the gender issue at all and don’t compare yourself to others. Get the hard skills down first, and then learn how to guide others. Trust your intuition and be confident in your decision-making.

You can find more information about Daley’s Mt. Baker guiding courses at www.tinyurl.com/aailiz