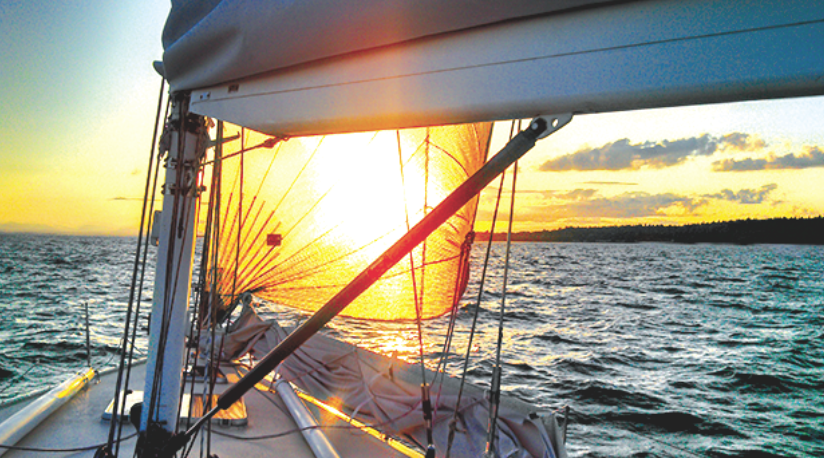 The inland oceans of Washington offer beautiful sailing destinations, but as you move north up the coast, the mountains get bigger, the scenes get wilder and the opportunities for adventure become limitless.

Secret surf breaks known only to locals, remote white sand beaches that rarely see footprints and gigantic mountain faces plunging into the depths of sheltered coves pepper the complex waterways of the B.C. coast. As you approach southwestern Alaska, the mountains become snowcapped, then snow covered and glaciated right down to the water. You could, in theory, charter a sailboat to the west side of Admiralty Island outside of Juneau, head up the mountains on skis, and ski a 3,000-foot powder run to a fjord on the east side to be picked up again.

That’s the type of adventure that inspired Karl and Jess Krüger to form their sail charter business Krüger Escapes. Based out of Orcas Island, Karl, Jess and their 7-year-old daughter Dagny are up for any adventure their clients can dream up.

Between the three of them, the Krügers have an impressive sailing resume. With Norwegian and Algonquian heritage, Karl grew up sailing in upstate New York and went on to race sailboats and teach others how to sail. He also worked as a rock-climbing and skiing guide in New Hampshire and Alaska before moving to Bellingham in the mid ‘90s.
“I moved to Bellingham because it seemed to be the only place in the U.S. where I could ski 20 inches of fresh powder in the morning and go sailing on salt water in the afternoon,” Karl said.

Jess grew up in Colorado and Illinois without sailing much, but shortly after moving to Washington she got a job crewing aboard the Lady Washington tall ship sailboat. By her second year she was an officer aboard the ship, teaching passengers maritime history and sailing as far as California.

As for Dagny, she’s been sailing since she was 5 months old, when her parents took her on a trip to Ketchikan and back. Although only 7, Dagny is “starting to put it all together,” to become a good sailor, Karl said.

The Krüger’s sole vessel until recently was Tomahawk, a 50-foot performance yacht designed for racing the southern oceans. Built for speed, the yacht fits 4-6 passengers in addition to Karl, Jess and Dagny in relative comfort.

A recently acquired addition to the fleet is designed a little more comfortably, with more spaces to roam and lounge. The new boat is named Winkapew (wing-KAH-poe), an Algonquian word for a good friend from the same tribe. The name reflects how the Krügers see all their clients.

“Everyone leaves as friends, but they almost feel like family. Dagny gets Christmas presents every year from some of our clients,” Jess said.

Exploring the coast and talking to locals along the way has helped them find some amazing places not on any cruising guides.

“We met a salty old guy on a dock who told us about this island nearby. We went out there and it totally blew our minds – huge old growth fir trees, white sand beaches and a beautiful point break. We won’t tell you where it is, but we’ll take you there,”
Karl said.

While a majority of their trips so far have stayed relatively close to home, Karl and Jess dream of more adventurous excursions, including ski and snowboard touring and heli trips to remote locations.

“There are a ton of places we want to go with great skiing, villages and hot springs,” Karl said. “Our trips can go in so many directions. We try to bring people to places they can go to shore, build a fire on the beach and explore.”

In warmer months, exploring by paddleboard and surfboard makes for a fun trip, and fishing and crabbing often add to the day’s menu. Surf trips to the west side of Vancouver Island are an option as well. With so many places to explore, some clients get overwhelmed. Karl’s advice is to choose an area to explore, then keep it local.

“If you spend a couple weeks in a 50-mile radius, you get to talk to people and find the really special places,” he said.

That’s when the real exploration begins. 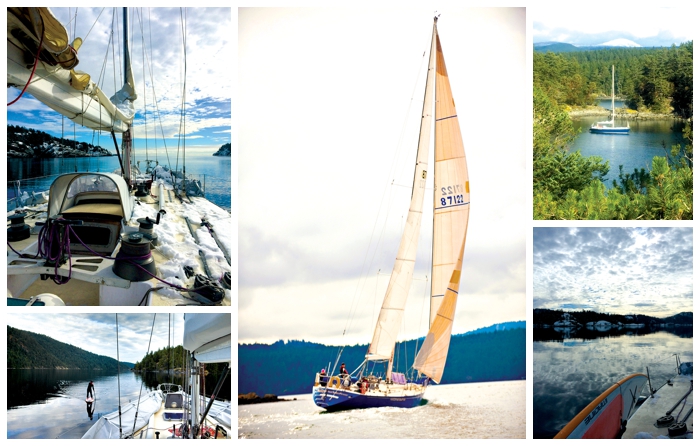