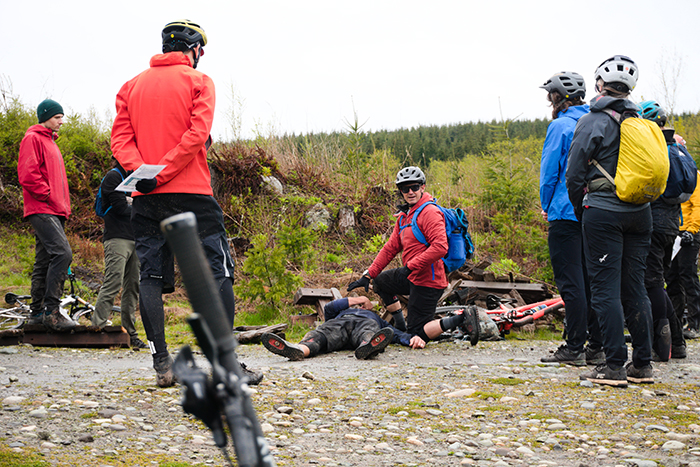 Story and photos by Nick Belcaster

So who here is part of the busted collar bone club?

Up go more hands than I expected. Certainly more than the general population. Mountain bikers are that way: Perpetually roughed up, pinballing off old growth or introducing their knees to the gravel. One in the group produces her surgical scars for the rest of us to consider.

Courses like wilderness first aid (WFA) and wilderness first responder (WFR) were made for these people. It’s first aid instruction for those who are as likely to come across someone on trail in need of some medical help as they are being that person. The issue, John Taussig realized, was that most wilderness medical courses dealt in broad generalities to almost the disservice of those on the receiving end. Try hammering home best practices for treatment of high altitude cerebral edema to the casual sailor. Eye glaze, ahoy.

Today Taussig operates Backcountry Medical Guides (BMG), a wilderness medicine educational nonprofit that offers unique sport-specific courses that are truly dialed in terms of what outdoor recreators might encounter in their discipline. Instruction is offered through the lenses of hiking, mountain biking, trail running, skiing or sailing, and aren’t shy about tailoring the curriculum to different user groups. “It’s also the hardest possible way to teach these classes,” Taussig says.

Instructors aren’t just instructors, they’re guides as well, managing the risk that comes along with leading outdoor excursions. But the tradeoff, BMG proposes, is a far more applicable education for their students.

“You can take skills learned in a mountain biking medical course and take them anywhere. They apply to the front country or the back country, but by focusing on specific populations you build a community in the process, and it allows people to extract what is most important to them,” Taussig says. 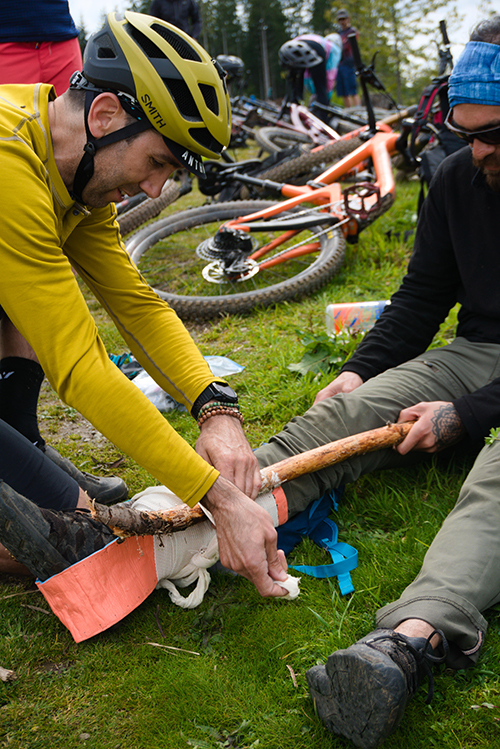 This helps explain why the instructors of the mountain biking WFA course I find myself in late April set aside more time to explain slinging a broken collar bone. Based on the stories being traded, I could tell that more than likely, everyone here was going to need it sooner than later. Our classroom was the world-class trails of Galbraith mountain, and our instructors were Drew Trimakas, an 18-year veteran paramedic with the Bellingham Fire Department, and Adam Cosner, 25-year paramedic and resident of Santa Cruz, California. I should also mention, they both rip on a bike.

Our instruction had begun with online course materials to prepare us for our two days on the bike. Most all of the BMG course offerings utilize little to no classroom space so after a brief lesson on CPR under cover of a picnic shelter, we’re out pedaling uphill into a spring rain. It’s this live-fire environment that really makes the education come to life, Taussig says.

“Imagine a rescue on Galbraith — it might be an hour and a half, two hours, which doesn’t seem like that long. But 30 minutes in the pouring rain, on the ground in a mud puddle, when you’re feeling that and you’re being assessed, you get that sense of importance from that weather,” Taussig says. “We don’t necessarily welcome it, but we shoulder it just fine.”

Our soggy ascent is rewarded by a cloud break just as we dive into the first of many scenarios, where our abilities in managing a patient are put to the test. The mechanism of injury ranges from the general to the mountain bike specific (Uh oh, looks like your buddy cased that last kicker!), and Trimakas and Cosner keep us fresh with stories from both their time as paramedics, as well as their time riding trails.

Interspersed throughout the day are moments of mountain bike MacGyverism: A bike inner tube can be used as a tourniquet in a pinch, bike bottles are excellent at providing the high pressure needed to irrigate a dirty wound, and knee pads are almost ready-made splints. It’s these nuggets of wisdom that are rattling around in my brain as the sun finally makes an appearance while we wrap up and blast down Bob’s Trail toward the cars.

Taussig has always had the itch to teach. In college he began instructing CPR for the American Heart Association, and at age 22 he constructed a curriculum to get ski patrollers in Montana up to speed and on the hill. By the time he was working as a flight paramedic in Santa Cruz in 2010, he had enough coworkers and friends who needed recertifications that it made sense to plant stakes — and BMG began.

BMG’s first office was the Breezy, a small sailboat docked in Santa Cruz harbor, which Taussig would sail to Monterey to host WFA and WFR courses on. Today BMG is still a scrappy grassroots affair (just with a bigger boat — the Lucia), and has assembled an impressive contingent of MDs, PAs and EMTs to instruct their courses. 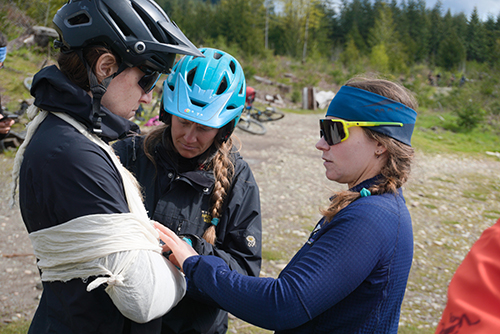 Taussig is incredibly proud of the curriculum that BMG has put together, noting that it is “100 percent uniquely Backcountry Medical Guides.” While there are standard bearers in the wilderness medical scene, there isn’t any standard curriculum, which means that BMG has been able to lean on their medical advisory board and craft an education that tunes in exactly to the frequency of whatever outdoor user group they’re working with that week. It’s custom-crafted wilderness medicine for what you’re into.

Day two of our course began far drier than the first, and a hearty pedal up the north side of Galbraith deposits us at an overlook where we would spend much of our morning. In the span of a few hours I’d stabilized a diabetic, assisted in the evacuation of a stroke victim and splinted an open femur fracture.

By lunch we had migrated to Blue Steel, a pro level jump line carved into a cut on the flanks of Galbraith, which was a fitting location for a discussion on trauma. Every story that Trimakas and Cosner shared weren’t so much a retelling of their greatest saves, but rather when they had learned something on the job or had encountered a situation on the trail and how they managed it.

After a few more scenarios (with copious fake blood involved) we pack up and make one final run of the day on a trail that Trimakas knows well: He cut it in. We queue up and finally burn off the elevation we’ve been holding in reserve all day, hooting and hollering our way down. It’s a perfect dirt sort of run, a loan finally being paid off for enduring the rain of the previous day. We fire our way back to the cars in good style, with no one kissing the turf this go.

A wilderness first aid or first responder course can be an invaluable experience for anyone who spends appreciable time recreating outdoors. The hard skills learned can be applied to a number of different situations, but almost more important is learning how to approach a scene with a level head and working through a system. “It’s hard to take an office setting cardiac arrest and apply it to a boat, but it’s really easy to take all the stressors and apply it to land,” Taussig says.

My weekend on the bike was an excellent refresher of the wilderness medical skills I had learned on my first rodeo with a WFR course, and seeing them through the perspective of a mountain biker added a different dimension and depth to my understanding. These are all skills that might make the difference on trail, whether it’s you who takes the spill, or someone you come across.

More so maybe, it just made me grateful for my intact collarbones.   x

Based in Bellingham, Nick Belcaster is an adventure journalist who enjoys breaking tree line, carrying as little as necessary and long walks across the country.