This article marks the fourth time that the Mount Baker Experience has featured mountain trivia. We have run this as an actual trivia night at the Stones Throw Brewery in the past, but alas … Covid-19. Soon we’ll all be vaccinated and we’ll be able to get back to some in person trivia.

I, for one, am looking forward to that!

But until then, we have MBE. So, let’s make the best of it.

Find the answers at the bottom of the page.

1) In the spring of 2021, there were two incidents of vandalism in Moab that disturbed this important thing:

b) The Slickrock Trail

2) Crystal Mountain Ski Area near Mt. Rainier is owned by this megacorporation:

s 3) The Twin Sister range is known in the geologic world to have the largest body of this type of exposed rock in the Western Hemisphere:

4) When one ties two ropes together, the knot used is referred to as a:

5) In Nepali, Mt. Everest is known as Sagarmatha, meaning “forehead in the sky.” In Tibetan, the mountain’s name means “mother of the world.” What is the Tibetan name for the mountain?

6) As a result of climate change, most of the world’s glaciers are retreating. But this spring, it was reported that this Alaskan glacier was surging with the river of ice moving 30 to 60 feet per day, instead of a few inches. This is the:

a) Ruth Glacier in the Alaska Range.

b) Muldrow Glacier on Denali.

7) What is the French word for a marked ski run?

8) A spectacular bouldering area has opened in the Chuckanut Mountains near Bellingham. The area is known as:

9) This 1200-mile National Scenic Trail spans three states and finishes at Cape Alva, the westernmost point of the continental United States. This is the:

10) Three reservoirs make up this National Recreation Area within the North Cascades national park complex. What is the name of the recreation area?

11) Leaders in the snow sports and climbing industries have embraced climate change activism with the Protect Our Winters organization. A famous pro snowboarder started this organization. Who was that snowboarder?

12) Which of the following was not named after Kulshan (the most commonly known native name for Mt. Baker)?

b) A painting company.

1 — C: Native American petroglyphs. In two unprecedented acts of vandalism, a climber bolted a line over petroglyphs and someone defaced a petroglyph with racist language and phallic imagery. Both of these incidents have spurred significant discussion in the climbing and outdoor communities.

3 — D: Olivine. The rock in the Twin Sisters range is incredibly sticky and textured. This makes for excellent climbing.

4 — A: Bend. There are many bends “knots” used to tie ropes together. In climbing, the most popular are the overhand flat bend (also known as the Euro Death Knot), the Flemish bend and the Double Fisherman’s Knot.

5 — A: Chomolungma. Junko Tabei (from Japan) was the first woman to reach the summit of Mt. Everest in 1975. “Nyinmo delek” means “good day” in Tibetan. And “donkang” means “hotel” in Tibetan.

6 — B: Muldrow Glacier on Denali. The reason the glacier is surging is because there is water trapped under the ice, making the terrain beneath more slippery.

7 — B: Piste. Many people refer to side-country or backcountry as “off-piste.”

8 — D: Lost Ledge. The newest and best addition to Bellingham rock climbing can be found just off the Rock Trail on Cleator Road.

9 — D: Pacific Northwest Trail. This trail makes its way through Montana, Idaho and Washington, linking many hundreds of minor but exceptionally good trails.

10 — A: Ross Lake National Recreation Area. The reservoirs that make up the area include Ross Lake, Diablo Lake and Gorge Lake.

11 — A: Jeremy Jones. The founder of Jones Snowboards, he also founded the non-profit Protect Our Winters in 2007.

12 — D: A grocery store. There are dozens of current businesses and organizations with Kulshan in its name. However, most people reading this are likely most familiar with the brewery and the middle school.

Jason is the executive director at the American Alpine Institute, a mountain guide and a widely published outdoor writer. He lives in Bellingham with his wife and two kids.    x 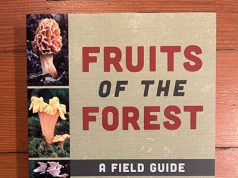