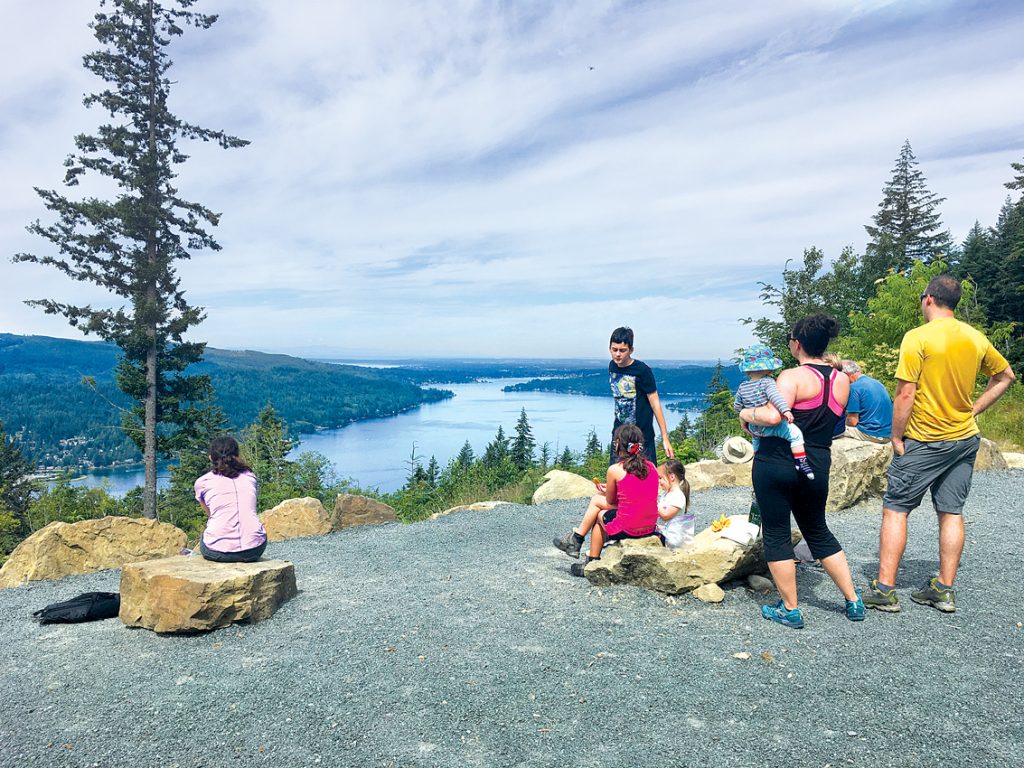 With the second summer of construction on Lake Whatcom trails nearly done, bikers and hikers will soon be able to see the true recreational potential of the nearly 10,000 acres of new Whatcom County-managed parkland.

By September, the County should be finishing a new 5-mile loop trail that winds from Sudden Valley to the top of Cougar Ridge, south of the lake in the Lookout Mountain Forest Preserve. That multi-use path will serve as a connector trail for future trails in the forest preserve, which is one of two tracts of land the state Department of Natural Resources transferred to Whatcom County in 2014 in a process called
reconveyance.

The county finished the first new trail in Lake Whatcom Park, the other parcel, across the lake on Stewart Mountain, last fall. The 2.4-mile mixed-use Chanterelle Trail weaves around steeps and gorges and through second-growth forest to a viewpoint high above the lake. It provides a pleasant alternative path to a destination that previously could only be reached by a walk up a gravel road under buzzing power lines.

The new trails offer a taste of what’s to come; the county’s plan for the parks, which it adopted in October 2016 after two years of planning and community outreach, calls for almost 100 miles of trails.

Together, the two parcels total 8,844 acres, and when combined with other adjacent county land and Galbraith Mountain (to which the city of Bellingham recently secured a recreational easement) make for a 10,000-plus-acre chunk of forest. Ridges in the area reach nearly 3,000 feet above sea level, with views toward the lake and Bellingham Bay in the distance.

The two parks are similar in size to public lands on Chuckanut and Blanchard mountains, a year-round hiking and biking destination that includes the popular Oyster Dome hike. Once finished, the Lake Whatcom parcel will offer a similar experience, Parker said.

“It might not quite have the opportunity for views as the Chuckanuts, but as far as feeling wild and remote while still being in our backyard, it’s really phenomenal,” he said. “Where we’re building this year is so beautiful you can easily forget that you’re so close to town.”

Trails in the parks will all be non-motorized and mostly mixed-use, with some hiker-only trails. The plan also calls for backcountry campsites with raised tent pads in some of the park’s most remote sections. With connections to Galbraith Mountain, some campsites could be reached from downtown Bellingham almost entirely by trail.

The plan doesn’t yet have a timeline, and future construction is contingent on funding. Parker thinks the county can average about 5 miles of trail per summer.

Trail work so far has been aided by dozens of volunteers and nonprofit groups including Washington Trails Association and Whatcom Mountain Bike Coalition. There’s always room for more help and Whatcom County will have a schedule of work parties for next summer on its website, Parker said.

Though the plans are ambitious, Parker stressed that after this summer both Lake Whatcom Park and Lookout Mountain Forest Preserve will have trails that push into the parks’ scenic terrain.

“This will really get people out there and experiencing more of these huge, existing parks,” he said.