Newsroom
Notes big and small from around the region

Western Washington has a wolf pack

Western Washington officially has a wolf pack for the first time in decades. This winter, a female wolf joined a male that had been captured and radio collared in Skagit County in 2017, according to the Washington Department of Fish and Wildlife. Biologists named the pair the Diobsud Creek pack, for the creek they have been spending time at north of Marblemount.

Wolves began returning to Washington state in 2008 after being wiped from the region in the early 1900s. Wolves settling west of the Cascades could mean that their territory to the east is full, wildlife biologists said.

Fish and Wildlife’s annual wolf survey this winter found there are at least 126 wolves and 27 packs in the state, mostly concentrated in northeast Washington.

The campaign is in partnership with community doctors and health care providers, who are encouraged to prescribe time outdoors to patients. Parkscriptions are meant to help patients foster a healthier lifestyle in tune with nature and gain improved mental and physical health.

It can also be more encouraging to get a parkscription in a written format, according to Dr. Richard Smith, regional medical director at Humana. “We all receive advice from physicians, and it seems to have more traction when it’s written down,” said Dr. Smith.

Squamish ski resort could open by 2025

Garibaldi at Squamish is planning a four-season mountain resort on Brohm Ridge, five minutes north of Squamish on the Sea-to-Sky Highway, that would eventually be 1,635 acres with 21 lifts and up to 20,000 beds. That’s much smaller than Whistler’s 8,171 acres, but bigger than Mt. Baker Ski Area, which is roughly 1,000 acres.

Construction would occur in four phases, with the first phase – eight ski lifts and 610 skiable acres – opening in 2025 and the final phase by 2040. In addition to skiing, plans call for lift-accessed mountain bike trails, a 62-acre village, and could also include snow tubing, ice skating, climbing walls, an “alpine roller coaster” and more.

The resort has received one environmental approval from the federal government, but still needs dozens of others before construction can start as planned in 2023.

King County’s Trailhead Direct shuttle program has expanded for the third year in a row after two successful pilot years. Starting in 2017, the service ran a shuttle between the Issaquah Transit Center and Squak and Tiger Mountain – two popular hiking areas in the King County foothills.

The service is a partnership involving King County Metro, King County Parks, private companies, several municipalities, nonprofits and others. More partners coming on board has allowed the program’s expansion.

Now, buses leave Seattle from four different transit hubs and reach eight different trailheads, stopping at regional transit centers along the way. The service costs $2.75 for adults and runs between April 20 and October 27.

To let Washington State Parks’ trail coordinator know what you think of the current trails and what you desire for the future, search “Larrabee State Park trail planning” on the state parks website, parks.state.wa.us, and check the events page on our website for future planning meetings. 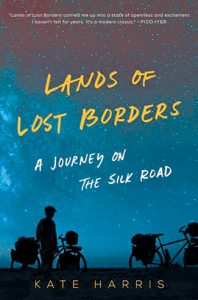 Kate Harris of B.C. won the RBC Taylor Prize for literary nonfiction for her book, “Lands of Lost Borders: Out of Bounds on the Silk Roads,” in which she bicycles along the famed routes connecting Europe and Asia.

In 14 months, Harris pedaled the Silk Road from beginning to end, then wrote about it from her off-grid cabin in northern B.C. The trip derailed her plans to become an astronaut, showing her that there’s adventure and exploration here on earth. The book tells the story of her adventure, but also of the region’s human history and her philosophy of exploring.

A stump too far?

Mount Baker Experience heard from several readers about our spring 2019 cover, which shows a mountain biker riding over an old-growth stump, with big trees in the background. We discussed the ethics of the photo in our office before publishing it and ultimately felt comfortable with it since it takes place next to a popular trail on Galbraith Mountain – a working forest that’s been heavily logged in recent years and will continue to be. The forest in the photo isn’t as pristine as it appears.

However, we regret not communicating that decision and should have made the context of the photo clear to readers, as many feared the photo would encourage mountain bikers to do similar stunts in other areas, some of which might not be working forests.

Nevertheless, as one reader, Chris Moench, pointed out: “That kind of activity leads to continual widening and braiding of trails as riders look for opportunities to get a little more thrill and challenge in their “shredding.” It damages tree roots, small animal habitat and can increase erosion. That the area will likely be clear-cut in the next few decades doesn’t negate its value as habitat currently.”