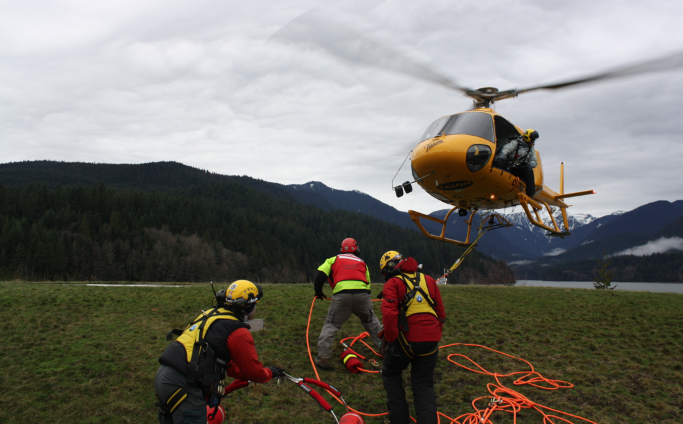 A rope in the darkness

It was about a week before Christmas 2012 and snowing heavily in the North Shore mountains when snowboarder Sebastian Boucher went missing in Cypress Provincial Park.

Members of the volunteer North Shore Rescue team based in North Vancouver had already spent two days looking for Boucher without success. The 33-year-old had last been seen ducking under a boundary rope and heading into rugged terrain west of the ski resort.

There was deep snow and a high risk of avalanche.

“It was terrible, terrible conditions,” said John Blown, a search team member for over a decade. “You were literally swimming in neck-deep snow.”

On the third day, there was a brief break in the weather – long enough to send a helicopter over the mountain. From the air, they spotted fresh tracks on the side of Black Mountain.
Tim Jones, the team leader at the time and a legendary figure in rescue circles, was in a downtown Vancouver hospital with his daughter, Taylor, who was there for surgery. When his pager went off, Jones ran to the nearest police station, stopped a squad car and asked to be driven to the airport, where the helicopter picked him up. There was no time to spare.

The helicopter dropped a four-man team including Jones, Blown, Mike Danks and Jeff Yarnold on the mountain with a sling-load of gear. But moving the gear in those conditions was like “pulling a sea anchor,” said Yarnold. “We ended up leaving it there.”
They followed the tracks down into a gulley towards Disbrow Creek. When people are lost in the North Shore Mountains, they almost always head down – it’s easier, and they think they’ll reach safety that way, heading toward the city and the ocean. What they find instead are dangerous waterfalls and drop-offs that end in icy creeks. Heading down is always a bad idea.

As darkness fell and the searchers got closer, they could hear Boucher yelling in the dark at the base of a waterfall.

There was no choice but to follow him down.

“When you throw a rope off into the darkness, you hope you can find another rappel station when you get to the end of your rope,” said Blown.

Yarnold, the first rescuer in, was shocked when he suddenly found himself face to face with Boucher, who was still upright and walking. Yarnold said, “I can’t believe you’re alive. He said, ‘Me neither.’”

High-risk rescues like this are all in a day’s – or most often a night’s – work for members of North Shore Rescue, probably B.C’s best-known mountain search and rescue team.
While volunteer search teams exist all over the province and neighboring Washington, the mountainous North Shore backcountry that pushes up close to metropolitan Vancouver has been a reason for many rescues over the almost 50 years the team has been in operation.

There are about 40 team members, who get called out to approximately 100 rescues every year. About 40 percent of those calls are in winter, and those are the ones that can quickly turn deadly.

Danks, the 38-year-old leader of North Shore Rescue, has been part of the team for 19 years. His dad Allan was a team member and leader when Danks was growing up.

“I’d wake up in the morning and my dad wouldn’t be there. My mom always said, ‘He’s gone to help someone.’ We always understood that.” What keeps him going is the knowledge that he’s making a difference, said Danks.

“I’ve been on lots of calls when people have given up. They’ve lain down to die.”

Danks remembers one time the team went to find a British scientist who hadn’t even been reported missing. He had been on North Vancouver’s Mt. Fromme for three or four days when his roommate casually mentioned to someone that he hadn’t come home. When Jones heard about it, he immediately mounted a search. They found the man on the mountain, crumpled in a ball.

“He thought he was going to die there,” Danks said.

Team members have rescued everyone from children to senior citizens. These days, the media profile of the North Shore mountains means a wider group of people is heading into the wild. Many take on challenges beyond their abilities and don’t take basic equipment. Yarnold said he’s seen people using an avalanche transceiver app on their phone rather than carrying a proper transceiver. “It doesn’t work,” he said. “It only gets you to within 30 meters.”

Blown acknowledged young men are still the mostly likely subjects of searches. “They’re less risk-averse than the rest of society,” he said.

He’s been asked more than a few times, “How can you go out and rescue these idiots time after time?” But everybody makes mistakes, he said. “No one deserves to die for a stupid
mistake.”

The team has maintained a staunch policy against asking people to pay for their rescues, despite occasional public debates. Blown said there’s no evidence that the risk of a fine acts as a deterrent against stupid behavior. But it can make people reluctant to call, further endangering both those who are lost and the team that must go and find them. It’s also not the Canadian way.

“We don’t believe we should just leave people on their own,” said Yarnold.

Team members often stay in touch with the people they rescue, like Chris Morley, who in 2007 found himself lying on a slope near Theta Lake, with broken bones and hypothermia setting in after falling 200 meters. When a team from North Shore Rescue reached Morley, he was soaking wet. “There’s no way he would have survived the night,” Yarnold said.

The men dug snow caves and spent two nights huddled together listening to avalanches crashing down on slopes around them. When a break in the weather came, the helicopter hovered just long enough for rescuers to literally throw Morley inside before it took off again.

“It was such a relief getting Chris out,” said Yarnold. “He’s definitely stayed in touch.”

Like many team members, Blown grew up hiking and rock climbing on the North Shore. “I grew up hiking the Grouse Grind before the Grind was called the Grind,” he said. “For as long as I could remember I always wanted to be a member of North Shore Rescue.”

Team members range in age from their 20s to 70s. There are a lot of “A-type personalities,” said Danks, but members understand they have to work as a team. “You need to have confidence in yourself and you need to be able to trust other people with your life,” said Danks.

While there’s plenty of excitement, there are also plenty of personal sacrifices that come with being on the team. Partners and kids are often ditched at a moment’s notice when the pager goes off. “It’s usually when you’re sitting down to a nice birthday dinner or when you’re trying to put the kids to bed,” said Danks, who has three young daughters, ages 2, 6 and 7. “It puts a ton of pressure on the other spouse.”

Team members say they are still adapting to being without Jones, the larger-than-life team leader and spokesman who died suddenly at 57 of a heart attack on Mount Seymour in January.

“He was a force of nature,” said Blown. “He was always motivating people to push their limits.”

When a rescue call came in, Jones was known for deciding what had to be done first and getting permission later. “If he followed the rulebook, there would be a lot of people who wouldn’t be here today,” said Yarnold.

Jones also worked tirelessly to raise the public profile of the team, which relies heavily on public donations for its operation. Although the provincial government pays for helicopter time during actual rescues, money for training and equipment – including maintenance of the team’s series of remote mountain repeater stations and emergency caches – all has to be raised.

For instance, each helicopter rescue kit costs $40,000. A recent lightning strike on a repeater station on Mt. Cathedral caused $30,000 in damage. Before he died, Jones had an aim of raising $6 million for a legacy fund that would generate enough interest to pay for operations each year. That’s still a goal of the team.

The team receives grants to cover part of its approximately $500,000 CDN annual budget, but the largest chunk – about $250,000 CDN – comes from public donations. “That’s just coming out of the goodness of people’s hearts.”

For more information on North Shore Rescue, or to donate to the team go to northshorerescue.com.   x