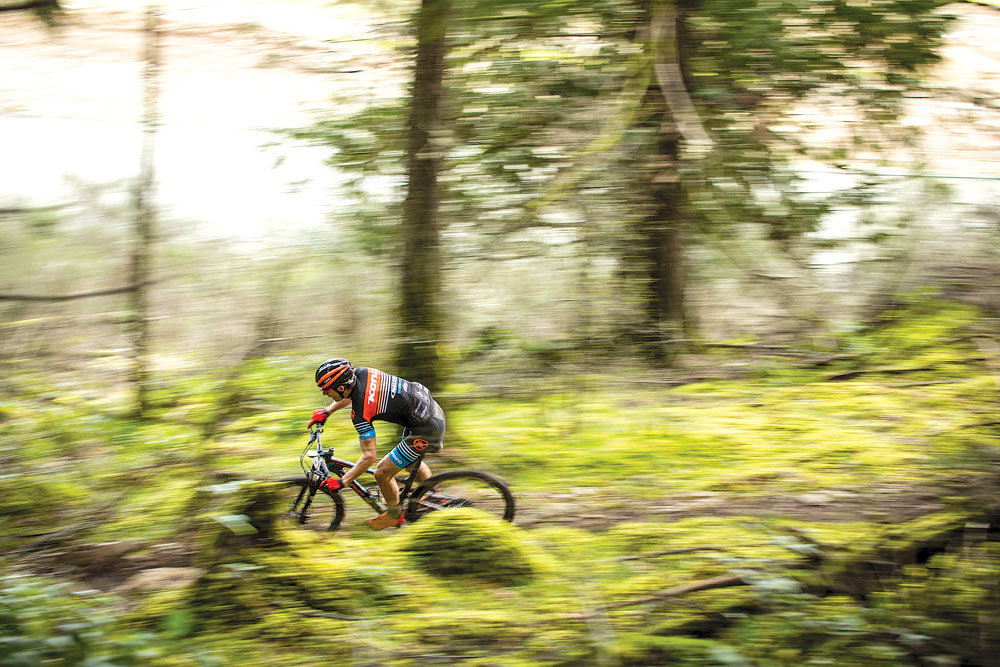 “Lean it harder! Lean it! Now open it up!” I hear the coach shout from above as we careen like frenzied beasts down a slippery northern slope at Galbraith Mountain. Everything is a blur except for the steady flow of brown trail through the focal point of my vision.

Since moving to Bellingham in 2013, I’ve ridden this trail, called Oriental Express, dozens of times and I’ve got it down just fine. But today we’re going beyond just “having it down.” Today is about focusing on the minutiae of mountain bike racing skills, cleaning up bad habits and aiming for perfection.

At an intersection, I look around and feel a swell of pride for my backyard. A group of past and future Olympians, World Championship medalists, National Champions – the top cross country (XC) racers in the country surround me. Our big objective for the year is to qualify for the Brazil Olympics in August, and these top riders flew into Bellingham to train on local trails.

Our sensei is Shaums March, founder of Bellingham-based mountain bike coaching and guiding company March Northwest. He is also the technical skills coach for the USA Cycling (USAC) national and olympic teams. March is running a skills camp with a group of U.S. national team riders, me included, to critique our movements in a way we can apply to racing faster.

We’re far from the din of air horns and howling spectators we might experience at the mountain bike World Cup. But riding well on these trails will help get us closer to achieving success at those big races.

This morning we are working on cornering – something simple, yet essential. We take turns cornering, working on maintaining speed through slippery, off-camber turns. Once we digest a few good reminders about body position, brake timing and entry points, we add a more realistic racing simulation by pedaling hard into the difficult section of trail. The point is to maintain focus and flow while we’re utterly exhausted. During a race, you’re never fresh going into challenging obstacles.

This is the equivalent to agility drills in the gym, except here we don’t sprint between cones or jump through hoops; we leap over rocks and roots, swoop through corners and fly between the trees.

Bellingham is known more as a haven for trail riders than as a training destination for spandex-clad racers. But the fact that USAC, the country’s governing body for competitive cycling, sends its top racers here to train is yet another testament to Bellingham’s trails and community. 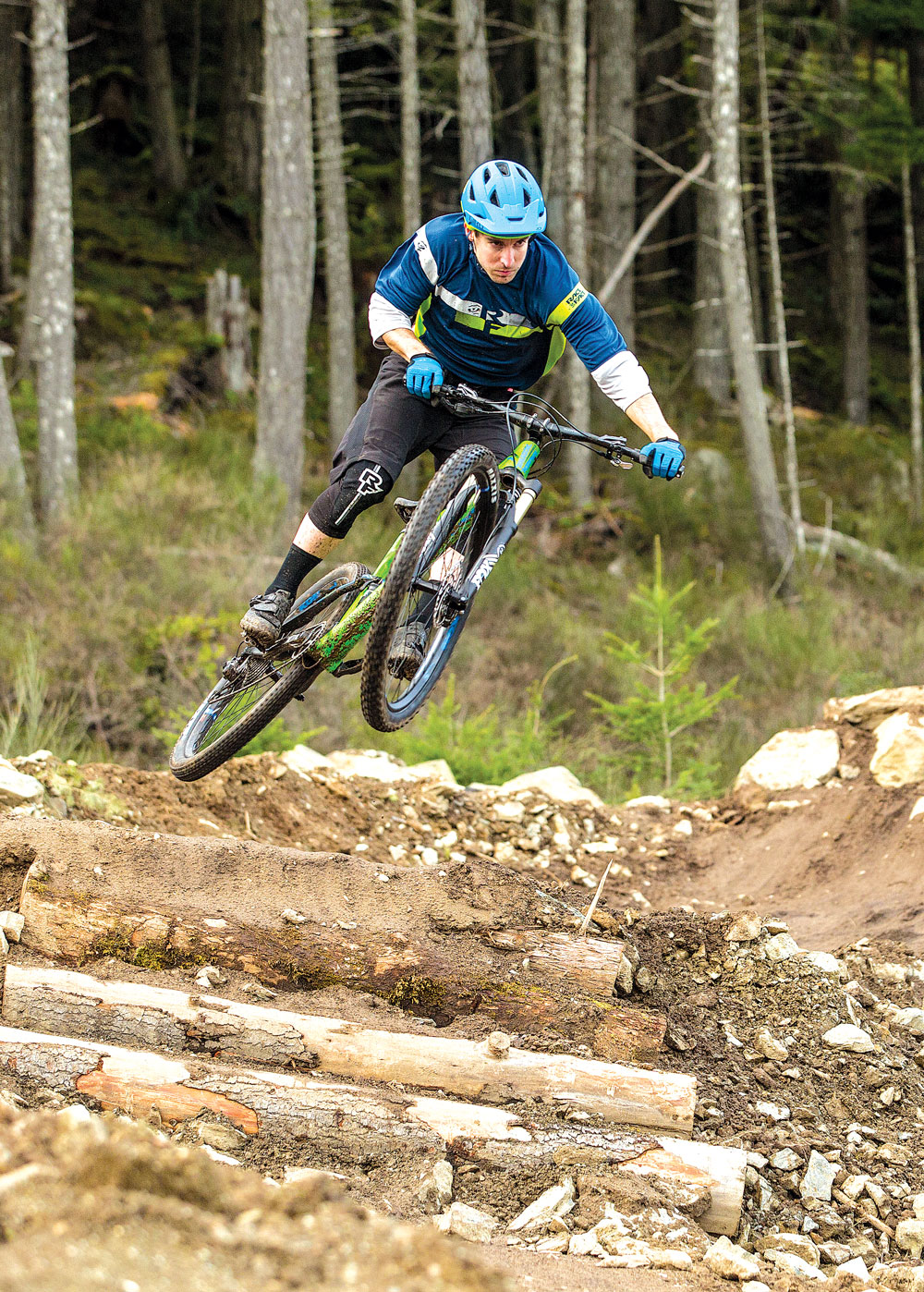 “Over the last couple years, Bellingham has become the USAC Mountain Bike National Team’s go-to location for skills training,” said Marc Gullickson, USAC mountain bike program director. “The combination of technically varied mountain bike terrain close to the city and the availability of highly qualified skills coaches living locally, such as March, make Bellingham the perfect location to send riders when we are looking to boost their skill level in preparation for the highest level of international competition.”

Indeed, we’re in good hands training with March, who founded the formal instruction program for the International Mountain Bike Association. Several of March’s riders have won National Championships, and five have even won World Championship titles.

“It’s awesome how well laid out, maintained, and managed [the trails] are with just the right amount of technical challenge,” Huck said. “I feel like it’s kind of a ‘choose-your-own-adventure’ with so many different trails that are easily accessed. You can ride up as far as you want, then peel off on any number of trail options.”

Current US National XC Champion Chloe Woodruff from Prescott, Arizona, has attended camps in Bellingham for the last two years. For her, the instruction and riding experiences were an important factor in her winning the coveted stars and stripes jersey in 2015.

“The reason for choosing Bellingham was to take advantage of the great terrain that the area has to offer, as well as to give the kids a glimpse into where some of the country’s best elite mountain bike athletes train,” he said. “We were impressed with the options for riding, as well as the community enthusiasm. We hope to be able to expand this camp every year, returning to the great community of Bellingham.”

The broader mountain bike community is a well-connected collective, and in the last few years, places like Galbraith and Chuckanut have attracted much positive attention. The work of organizations such as the Whatcom Mountain Bike Coalition (WMBC), the education-focused Ride Run and Dig (RRAD) program and March Northwest, are setting strong examples of how to develop a thriving and inclusive riding community alongside a world-class trail system.

Stephen Ettinger, 2013 national champion and 2016 Olympic hopeful took things a step further by relocating from Bozeman, Montana in order to prepare for the 2016 race season. Like many others who now call Bellingham home (myself included), Ettinger moved here for the trails.

“It’s been a total paradigm shift for me this winter, being able to train on trails that are as or more technical than anything we’d face at a World Cup or the Olympics,” he said. “And it’s all just right out the door, miles and miles of it.”

“I have incredible people to train with and resources for strength training and massage,” Ettinger said. “Having access to those resources really helps complete the deal here. And then there are a ton of great people I’m meeting that’ll help keep me centered when I am off the bike.”

That’s no surprise to those of us who call Bellingham home, but hearing such a consistent message from jet-setting professionals who have experienced literally hundreds of places to ride around the world – that’s a special validation.   x

Spencer Paxson is a Bellingham local and Pacific Northwest native who rides professionally for The Kona Bicycle Company.