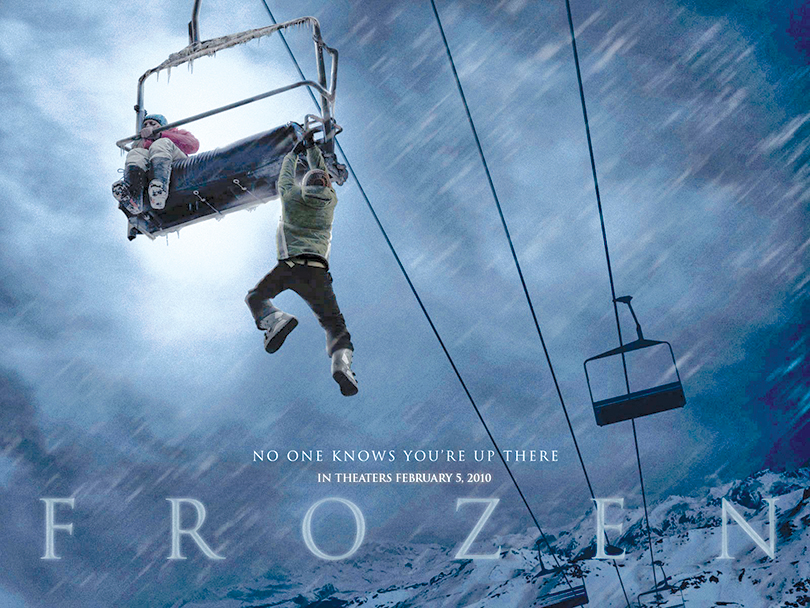 As the Halloween holiday approaches, many of us start to think about horror movies. We kind of like to be scared. We like the tension and jump-out-of-your-seat moments that are the bread and butter of these kinds of films.

But deep down we know the truth.

Most horror movies are complete garbage. We just don’t want to admit that we like garbage. It’s like junk food. Halloween provides us an excuse to watch garbage without being judged, just like a big ski tour allows us an excuse to eat junk food without judgment.

One of the tropes commonly used in horror films is to create relatable characters in relatable situations. The more we see ourselves in the characters, the easier it is for the film to scare us. This is just as true for people who play in the mountains as it is for people who like to buy creepy houses and take their sorority sisters to remote cabins. So we’ve compiled a list of, well, honestly… terrible films for outdoors people.

You may not realize this, but there is a film called Frozen with no singing and no… I was going to say cartoons, but the characters are so cartoonish in this film, that would be incorrect.

The non-singing version of Frozen goes something like this. Three friends get stuck high on a ski lift on a Sunday night after a New England resort closes for the week. Parker, Joe and Dan are left to try to find a way to get down or face the prospect of freezing to death.

That is, if someone had spent any time outdoors at all, researched frostbite and cold weather injuries and if they had made a tight and engaging story instead of a horror movie.

The characters in this movie had a hard time thinking about how to stay warm. Joe, the lone skier in the group, never puts up his hood no matter how cold it gets. Parker loses a glove early in the movie and then decides it’s a good idea to go to sleep on the ski lift with her hand wrapped tightly around the metal safety bar.

These things just wouldn’t happen in real life. It’s really hard to suspend disbelief when it’s clear the actors aren’t really cold and have never been cold. Nobody shivers in the entire movie and the filmmakers are far more interested in getting some gore out of the cold weather injuries than reality.

The biggest problem is that this is exactly the type of movie a low-budget production company could do very well. It is a tight and simplistic storyline that, when character-driven, could be engaging. The problem is that the characters are paper-thin. They have nice backstories, but they are just so dumb it’s hard to be engaged by them. This is definitely one of those movies where you spend a lot of time yelling, “No! No! No! Don’t do that!”

All that said, this movie has one major thing working for it: it’s flush with what-would-I-do situations. It’s likely most of you would zip up your jacket and put up your hood. I suspect most of you would not lose your gloves, and if you did, I bet you would keep your hands in your pockets. Indeed, most of you would probably have cell phones and the problem would be solved without any real drama.

You’d think I’d know better. How could a film called Blood Glacier ever be good? There 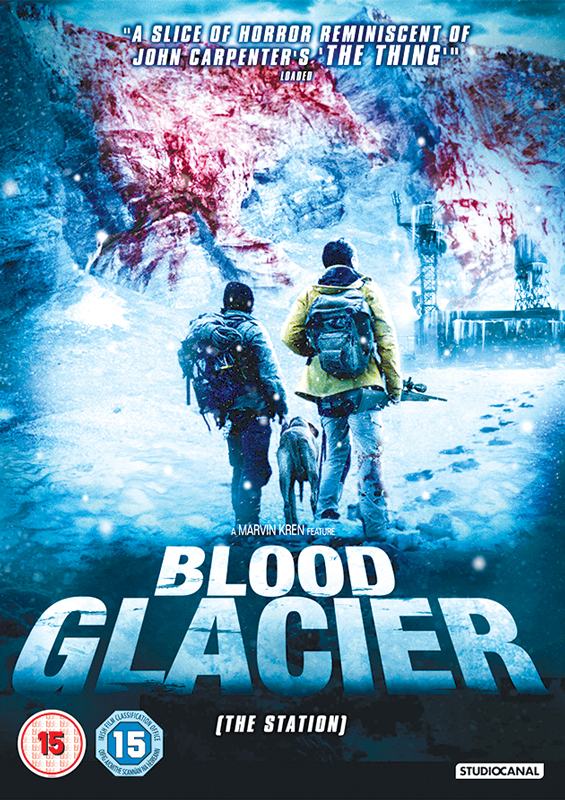 were several hints that it would be terrible, but I watched it anyway.

As the film opened, it showed glaciers and mountains, which would suddenly go from pristine to a filtered red along with jarring music.

Oh yeah, and the film was dubbed too. I think it might have been made by Germans… or something. It’s hard to tell while watching it. But it was indeed shot in the Alps.

A group of climate scientists are studying glaciers in a remote corner of the Alps. They discover that a glacier appears to be bleeding. Unbeknownst to them, the “blood” coming from the glacier is mutating the local wildlife. Essentially the bacterium in the substance creates hybrid animals. If an animal ate another animal, the new hybrid would have the characteristics of both the host and the thing the animal ate. And of course the hybrid is born the same way an alien from the Alien franchise is born: by bursting out of the host’s body.

This presents a bit of a problem for the scientists. Because, for some reason, the prime minister is on her way up to the hut with the hero’s ex-girlfriend and lots of other people available to get attacked by hybrid blood glacier monsters.

But here’s the incredible twist (spoiler alert). It turns out that the hero and his girlfriend were going to have a baby. She had an abortion and regretted it. She really, really wanted a baby with him, which is good because an infected dog licked the hero’s blood and had a hybrid dog-baby-thing burst out of its stomach, which the pair – obviously – adopted as their own.

So the story and the dialogue are pretty laughable, but then so are the monsters – it’s hard not to laugh at them. They look like something a high school drama shop with no budget might produce for a teenage haunted house. They’re terrible – and kind of funny. 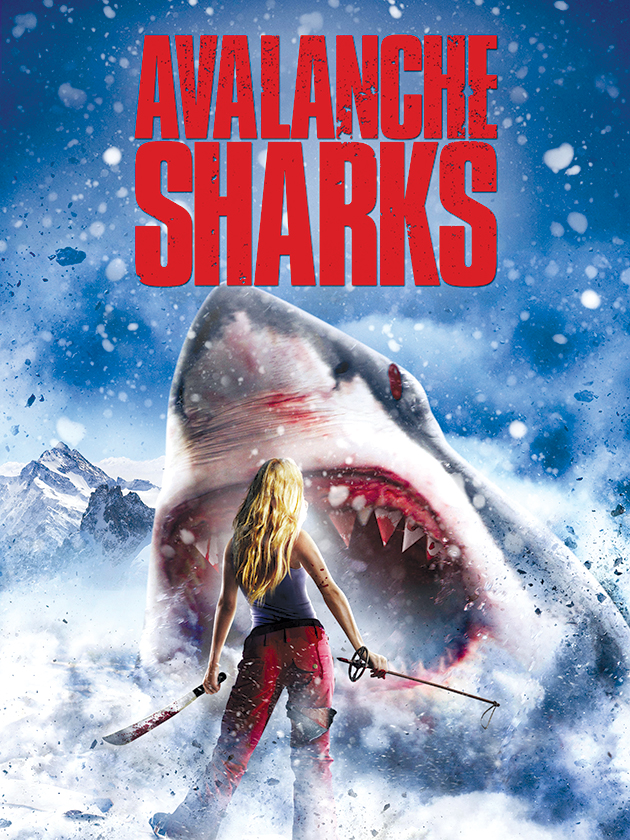 Yeah, avalanche sharks. Are you surprised? I’ve saved the worst for last.

So this movie has a plot. I think. But I’m not sure what it is outside the stupidity that is avalanche sharks.

Somebody, somewhere actually thought cartoonish-looking sharks ripping through the snow and feasting on stereotypically “bro-brah” snowboarders were a good idea. You’re probably aware that it would be really difficult for sharks to travel through the snowpack of the eastern Sierras, where the film supposedly takes place. You probably know that, even if the sharks could travel through snow, it would need to be light, fluffy snow – not the hard-packed ice found here. You’re also probably aware that sharks don’t have a preference for bikini-clad snow bunnies over stinky snowboarder dudes.

Every female character in this film is an over-sexualized prop. They’re often giggling, drunk and half-naked, apparently waiting for a shark to come and bite them in half. Male characters are not much better. The relationships between the characters are so over-the-top sexual that they are forced to define their relationships to one another within one sentence. There are two options here: “I’m so glad I have you as a cousin!” Or, “Come on soldier boy, it’s time for your duty. Get your military ass over here and take care of me.”

The acting in this film is atrocious. Picture the worst high school production of Music Man you can imagine. None of the kids know their lines. They’re coming on stage too soon and leaving too early. They’re so nervous that they can’t stop pacing and they’re talking like robots. They all have the flu and keep throwing up, and maybe somebody trips over somebody else on stage and knocks down half the set. But the show must go on, so the kids keep talking like robots and forgetting lines and tripping over each other and throwing up on the audience.

Watching the full production of Music Man I just described would be like sitting on a beautiful beach with a margarita compared to watching any of the performances in Avalanche Sharks. Maybe don’t watch this one.