At first glance the eagle nearby looks like it is perched on the water.

It’s an illusion, of course – eagles don’t perch on the sea any more than I do – but it’s an engaging one. The platinum waters of San Juan Island’s Roche Harbor have slow, languid little swells that seem to lift this bird slightly up and down, bobbing like a crabpot float.

Easy enough to conduct a reality check. We dip our paddles in the placid bay and cautiously head toward the bird, which seems unconcerned by our kayak. The eagle turns its head to cast an implacable gaze upon us and concludes we are too big to eat but too small to fear, not to mention too silly with half-bodies poking up from neon green fiberglass tubes. The slow blink of the eagle’s nictitating membrane is an eloquent dismissal, and we can’t help but laugh at our obvious insignificance.

Anyone who’s encountered an eagle knows that steely stare. Yes, we are close enough to see every mote in the eagle eye; the sea level vantage afforded by kayak or canoe makes people far less alarming to wild creatures. Stroking past the eagle we eventually discern that it’s on a small sand bar barely an inch above water; the incoming tide will soon subsume its vantage and off it’ll go to one of the broken-top firs that line the shore.

These waters house, at a minimum, seals, eagles, shorebirds, herons, sea lions, salmon, crabs, cormorants, loons and more – an aquatic Serengeti. Add to that the compelling variety of water here, from sublimely calm protected bays, coves and inlets, to narrow channels with racing tides, to luminous open straits that are the domain of the Salish Sea’s most famous creatures … not to mention the vast array of other things to see, from sunflower sea stars to glacier-scraped cliffs to minks and otters tumbling along pebbly shores and deer browsing high-tide seaweed.

We turn left at Garrison Bay and head into the small cove inside San Juan Island National Historical Park’s English Camp where a sandy beach makes a shore respite easy, and the sights include a hoary old bigleaf maple that was once reputed to be the largest in the world.

A half-hour of easy paddling brings us to Westcott Bay Shellfish, another perfect pullout (with a dock) where picnic tables, grassy lawns and oysters, clams, mussels and drinks and snacks await visitors. The quirky ambiance is quintessentially island-esque: You have to select your own oysters by hand from the tanks (they provide gloves for the frigid water) and you have to shuck them yourself, too. They’ll give you a knife and a demo, accompanied by a philosophical axiom: “We believe shucking is a valuable life skill.”

I agree with that. Shucking has many real-world applications. More cosmically, I’d argue that paddling these islands is a spiritual exercise that enhances life in multiple ways, from sheer fun such as coasting past bald eagles, to the eventual wisdom the experience inoculates into your cells. Yes, this is the domain of orca pods, packs of sea lions and the occasional gray or even fin whale. The southwest coast of San Juan Island along Haro Strait is among the most whale-watched waters on Earth, where the experience of seeing whales is slightly more interesting than the phenomenon posed by all the humans fervently intent on seeing them as they help burn a couple hundred gallons of diesel fuel, fill garbage cans with plastic drinks bottles, and snap a frenzy of pictures for geotagging as exhibits in their bucket list. 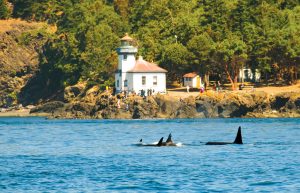 But I’m not here for encounters with charismatic megafauna. Frankly, from a kayak I’d rather see wigeons than whales, and the quiet paddle routes found in these islands yield an infinity of treasures and things for the careful journeyer to
investigate:

• A bed of bull kelp is a marine forest. Hidden in this saltwater habitat are rockfish, crabs, urchins, juvenile salmon, sea stars and more. But what a wondrous thing that they make their own buoys, that they reach 50 feet up from sheer rock, that they are so luxuriant that waves enter a kelp bed like squall lines and turn almost instantly into carpet rolls.

• If the neon green of a kayak is a silly human affectation, then why are anemones the same color? And if you pause in a small cove for a half-hour, just drifting above the anemones, sea stars, nudibranchs and rock crabs shimmering in the topaz water, does that time count against your life span?

• Ballerinas have nothing on cormorants, which skim above the water with microscopic precision, somehow clearing each wavelet close enough that, were they football players at the goal line, constant replays would fail to certify a score or a flop. But cormorants never flop. Ever.

• What are the sea lions saying to each other as they bark incessantly on and around channel buoys?

• If it’s dead flat and calm in Fisherman Bay on Lopez Island, why is the mist twirling past at 5 mph?

• What’s the difference between a rock, a skerry, an islet and a reef? Intriguing, isn’t it, how we construct vocabularies to bring order to a world that actually consists of limitless disorder and variation. In these islands the water is never still, though the surface may be calm, and the landscape and seascape are faceted a million ways. The current does not consider the name of its turn point – but there’s a small peninsula near Friday Harbor called Turn Point. 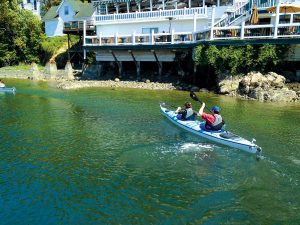 There are more than 400 islands, rocks, skerries and such in the San Juan archipelago, and at least as many bays, channels, inlets, passages, coves and harbors. The waters that divide the islands, in cartological terms, actually join them. Paddling among them is a meditation in space and time, and my decades of journeys here eventually brought me here to live. The waters are the same, but I’m not.

While there are hundreds of quite safe paddle routes, please ascertain where to go based on your experience level, from local guides and outfitters. As they say in Hawaii, if in doubt, don’t go out.

Lifelong journalist Eric Lucas lives on a small farm on San Juan Island. He is the author of numerous travel guidebooks, and is a regular correspondent for Alaska Airlines Beyond magazine.