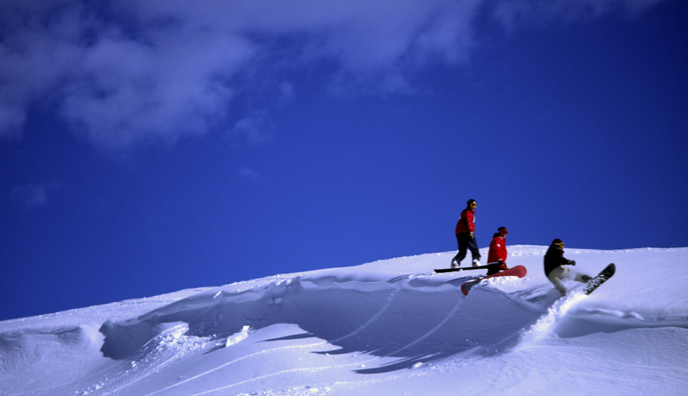 The sun was setting high in the Cascades. Evening light rippled over hilltops that looked like ocean waves. Lifts ferried silhouetted skiers on the last run of the day while the wind blew powder off the tops of ridges. It was magnificent. But when I looked at my images later, I saw a jumble of elements, like a chef who threw too many random spices into a muddled stew. In this article, we’ll explore visual language: How we place objects, line and color in the frame to create strong images.

How the camera sees

The camera sees space and objects differently than humans. In a two-dimensional still image, there is no depth, movement or time. The photographer must use visual language to imply these things.

We react to photographs in a fraction of a second. The response occurs in our midbrain, an instinctive part of our consciousness. Based on millions of years of evolution, the principles of aesthetics are hard wired in our brains. Anyone lingering in an art gallery discussing why he or she likes an image is really just rationalizing what their midbrain told them in that first instant. The photographer’s job is to anticipate and manipulate these reactions to evoke the response they want from the viewer.

Where your eye goes

The eye goes to certain places in a photograph first. It perceives those things as most important. If your main subject doesn’t draw attention quickly, it will get lost in the shuffle. The area of highest contrast, followed by the highlights, then mid tones, then shadows Warm colors before cool colors Objects in sharp focus before blurry ones Large objects before small ones Objects perceived as closer to the camera before those further away Objects perceived as moving before objects perceived as still Isolated objects before clumped objects Humans, then other living things, then inanimate objects Having the eye hunt around and discover meaning keeps the viewer interested. But if it’s too subtle or too difficult, the viewer’s eye will never find the needle in the haystack.

Most amateur photographers know the “rule of thirds” – placing the main elements along lines and intersections roughly along thirds of the frame. Empty space has weight in photographs. When we place an element directly in the center, the equal space above/below and left/right hold it in place. That means the only way it can ‘move’ is forward/back, toward or away from the viewer. In direct portraits this can be very effective, but if we want a relationship between elements within the frame, it doesn’t work. When we place an element to the side and either up or down, we allow it to move in those planes. It can then have relationships with other elements in the frame, including empty space (Image 2). The rule of thirds is based on the golden ratio, an aesthetic older than the Parthenon. The sections aren’t even. In cultures that read left-to-right and top-to-bottom, the strongest position is the bottom right. 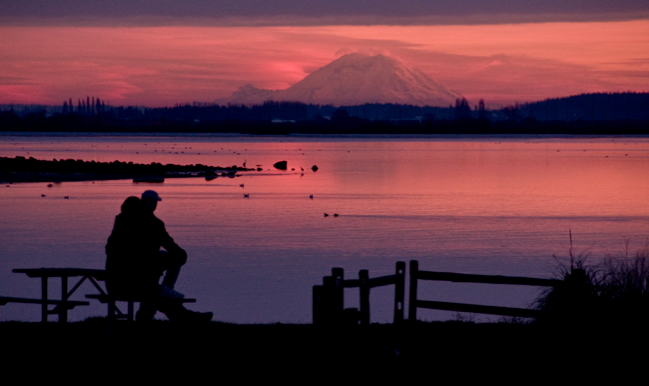 Different lines have different meanings. Horizontal lines imply stability and rest, while vertical lines convey strength, power and growth. Diagonal lines are more dynamic and depict movement to something. Lines from upper left to bottom right are perceived as falling into the frame with gravity. Lines from bottom left to upper right are perceived as climbing up and out of the frame.

Converging diagonals draw the eye like a vortex to where they meet. While diagonal lines imply movement to something, curves move through the frames. Curves are also sensuous, and become more so if they’re very sinuous. Curves with room to move will result in a more peaceful image. Lines also have a hierarchy. In a scene with many horizontal lines, vertical lines will become dominant and be perceived as moving.

Warm colors will seem to advance toward the viewer, while cool colors will recede. When colors are paired with their complementary colors (opposite on the color wheel) they create drama and a perception of greater contrast and saturation. When they are paired with like colors, the colors seem muted, as do the emotions associated with them. Colors also have meanings. Red goes with passion; black with elegance, mystery or evil and yellow with sunshine. Color can be a distraction in outdoor sports. Most outdoor gear is highly saturated and warm, and can distract from facial expressions or texture. Removing color from these photos often helps an image (Image 1). 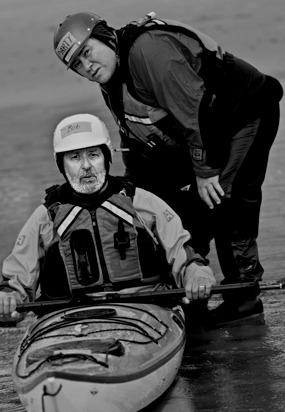 Perspective is the relationship between the viewer and the elements in the frame. Camera position plays a major role. Headhigh? On the ground? Above? How close? The focal length of the lens also controls perspective as well as what’s in the frame. A wide-angle lens makes objects close to the lens seem bigger, and those farther away even more distant and small. They also distort perspective on the edges; trees in the corners will begin to slant.

Telephoto lenses compress distance, making distant ridges appear close together and more vertical. The F-stop on your camera also controls how much of the image is in focus. Small apertures keep nearly everything in focus, while large diameters will keep only a narrow range in focus, and the background and foreground will blur. This isolates a subject from its environment and softens distracting backgrounds.

Balance is the relative ‘weight’ that different elements have in the frame. All the elements of composition – contrast, placement, size, color, lines and perspective – control how an image is balanced. Peace or tension? Remember that reactions to images are hard wired. Images that follow the principles of composition will be perceived as peaceful. If peace is what you want to convey, follow these rules. If you want to create tension, as I often do, when photograph- ing sports, dramatic landscapes and intense personal stories, break the rules to evoke tension. (Image 3)

Here are some exercises to improve your compositions:

1. Slow Down. Put your camera on a tripod. Take no more than one image every 15 minutes. See the whole frame, and think carefully about camera position, composition, and light. Imagine you’re shooting with a view camera where each sheet of film costs $8. 2. Simplify. See how few elements you can include in an image to make it impactful. Convert it to black and white. Boil your images down to texture and light.

3. Eliminate the horizon. Photograph landscapes with no horizon. Landscapes will become more intimate and less about where they are, but what they feel like (Image 3).

Neil Schulman is a photographer and writer from Portland, Oregon. His clients include the Oregonian, RapidMedia, Sea Kayaker, Coast & Kayak and several conservation groups. You can see his work at neilschulman.com. x 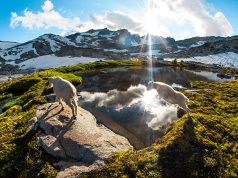