Not just peace — the absence of war. Not just absence of it — prevention of it. Sounds pretty choice right now, yes?

That’s exactly what San Juan Island National Historical Park is about. This large preserve on its namesake island commemorates the occasion in which two major powers, Britain and the U.S., resolved a territorial dispute by submitting to international arbitration. Kaiser Wilhelm of Germany, the adjudicator, awarded the San Juan Islands to the U.S. in 1872, 12 years after the dispute began when an American farmer killed a British settler’s pig — thus the incident’s popular moniker, the “Pig War.”

Though each nation had soldiers garrisoned on the island, no shots were fired to settle the conflict. Peace won.

But however compelling, history’s just a story — in this case one a century and a half old — and SJINHP has a modern story perhaps as meaningful as its historic one. The park’s two large sections preserve vibrant, rare ecosystems that are timelessly valuable. Here, the old song of peace is a quiet counterpoint to today’s songs of prairie and woods, foxes and falcons, widgeons and the one living thing most sought by island visitors, whales.

The park’s southern unit, called American Camp, holds a vast expanse of meadow and shore and broad-shouldered headlands, which provide some of the best vantage points to watch for the Salish Sea’s famous orcas — not to mention humpbacks, the occasional gray and rarely, the world’s second-largest cetaceans, fin whales. If there are not whales to be seen, the Olympic Mountains across the Strait of Juan de Fuca set a painterly horizon.

American Camp’s 1750 acres also constitute one of the largest remaining parcels of undisturbed native prairie in the Puget Sound basin. And this is the world’s only home of an extremely rare endangered butterfly, the Island Marble. This small, shimmering ivory creature may number just 200, and is almost completely dependent on wide-open prairie and the wild mustards found within it. Thought to have disappeared entirely in 1908, its rediscovery in 1998 was magical evidence of the resilience of nature, but its status remains imperiled. It is found only here, with populations scattered around the island and neighboring Lopez, and park officials have been joined by local conservation advocates in setting aside habitat for it. Best time to see the Island Marble is early summer on the open meadows west of the main access, Cattle Point Road.

The northeast side of American Camp holds an entirely different landscape, demonstrating that directional exposure is everything in the Northwest. Here, cool woodlands facing away from the sun lead down to marshy wetlands that include two large lagoons providing unparalleled waterfowl watching. Both sides of American Camp have long stretches of gravel-and-sand shoreline that offer divine beachcombing and, for the hardy among us, summer swimming.

Twelve miles northwest of American Camp is English Camp, the land garrisoned by British troops during the 12-year standoff over island control. This 400-acre parcel is notably different from American Camp; here, open, mostly deciduous woodlands plunge down a hillside to a quiet cove bolstered by hills on every side. The waters here sound to the symphony of sea lions and seals, ducks, gulls, eagles and marine denizens of every sort. In winter you might spy a puffin; in summer, ospreys and kingfishers.

The hillside leading up from English Camp is a prime example of an extremely rare Salish Sea ecosystem, Garry oak prairie. This most northerly of West Coast oaks matures over centuries into sturdy, gnarled arboreal grandfathers on prime sites such as these west-facing dry hills. Several hiking trails lead up into the oak woodlands, but most visitors simply stroll down to the old British garrison enclave along the water. A massive bigleaf maple, one of the world’s largest, presides over a Victorian knot garden. Few places in the Northwest are better for spreading a picnic blanket and lazing away an afternoon in the sun.

Launching a kayak or canoe here for a half-day paddle offers access to a sheltered wonderland of inlets and bays that are perfect for marine wildlife watching, and relatively free of high-powered boat traffic. Tides can be tricky, but no fearsome rips roil the waters immediately surrounding English Camp.

Both parts of the park are home to San Juan Island’s ubiquitous and photogenic red foxes, which thrive on feral rabbit populations and provide countless juicy snapshots for park visitors. Although they are the same species, red foxes are sometimes mostly black with gray stippling, a color phase called silver fox — beautiful evocations of the constant variety of nature left alone. And please do leave them alone: It is neither right nor legal to offer our foxes an Oreo so you can get a better post on Instagram. And cute as their kits may be, they don’t need strangers stalking them any more than your own kids do.

There are many forms of peace. San Juan Island National Historical Park is home to them all.   x

Eric Lucas is the author of the Michelin guide to Alaska. He lives on a small farm on San Juan Island, where he grows organic hay, garlic, apples and beans. Trailnot4sissies.com 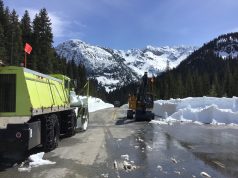