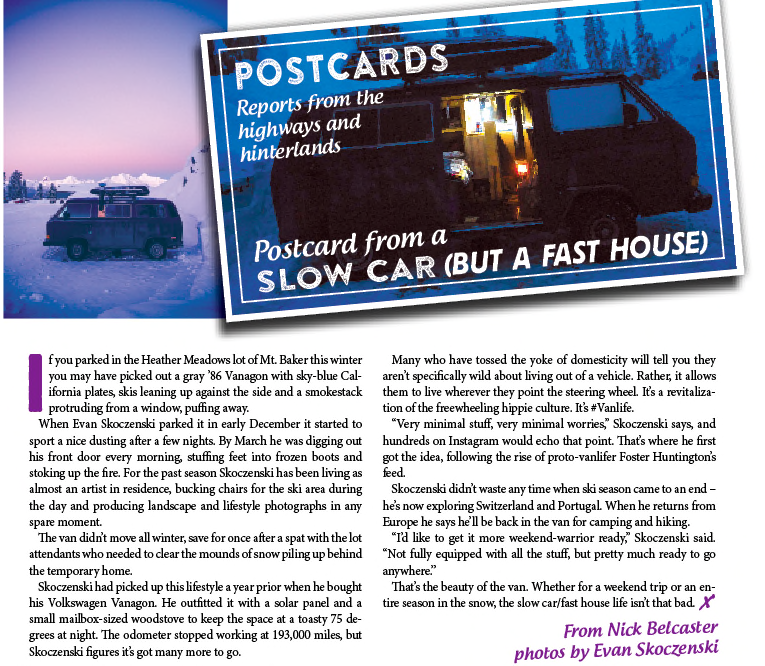 If you parked in the Heather Meadows lot of Mt. Baker this winter you may have picked out a gray ’86 Vanagon with sky-blue California plates, skis leaning up against the side and a smokestack protruding from a window, puffing away.

When Evan Skoczenski parked it in early December it started to sport a nice dusting after a few nights. By March he was digging out his front door every morning, stuffing feet into frozen boots and stoking up the fire. For the past season Skoczenski has been living as almost an artist in residence, bucking chairs for the ski area during the day and producing landscape and lifestyle photographs in any spare moment.

The van didn’t move all winter, save for once after a spat with the lot attendants who needed to clear the mounds of snow piling up behind the temporary home.

Skoczenski had picked up this lifestyle a year prior when he bought his Volkswagen Vanagon. He outfitted it with a solar panel and a small mailbox-sized woodstove to keep the space at a toasty 75 degrees at night. The odometer stopped working at 193,000 miles, but Skoczenski figures it’s got many more to go.

Many who have tossed the yoke of domesticity will tell you they aren’t specifically wild about living out of a vehicle. Rather, it allows them to live wherever they point the steering wheel. It’s a revitalization of the freewheeling hippie culture. It’s #Vanlife.

“Very minimal stuff, very minimal worries,” Skoczenski says, and hundreds on Instagram would echo that point. That’s where he first got the idea, following the rise of proto-vanlifer Foster Huntington’s feed.

Skoczenski didn’t waste any time when ski season came to an end – he’s now exploring Switzerland and Portugal. When he returns from Europe he says he’ll be back in the van for camping and hiking.

“I’d like to get it more weekend-warrior ready,” Skoczenski said. “Not fully equipped with all the stuff, but pretty much ready to go anywhere.”

That’s the beauty of the van. Whether for a weekend trip or an entire season in the snow, the slow car/fast house life isn’t that bad. 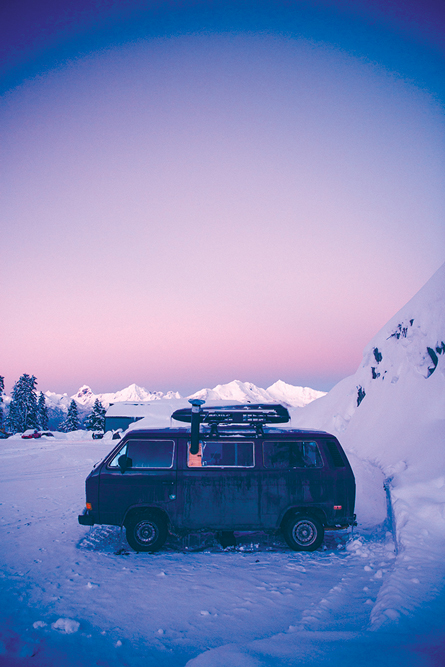