Nine members departed Excelsior Group C.G. at around 9:15 am and carpooled to Artist Point. We passed Lake Ann parking area and it was totally filled up. Artist
point had a slough of cars but still lots of room for more.

The U.S Forest service had an information booth at the top manned by two rangers. On asking about the Canyon Ridge Road and Glacier Creek Road, again did not hear any further news. They mentioned the lack of money and I,  in my usual Dutch fashion,  mentioned the abundance of money but it is in the wrong hands, private that is. It would be nice if some of the politicians would hike or camp in our areas, they may have a stronger urge to fund these critical areas. Gee, lets leave some of this for the future generations the way Teddy Roosevelt and the likes intended.

The weather was perfect, even a little warmer than expected. Frank led most of the way. After 1.5 miles some munched on blueberries before continuing up. We stopped for lunch at the three miles mark atop a ridge and tried to locate goats. However, to no avail. Bud H. had mentioned that the herd is thinning due to a possible waste decease. I asked hikers on the way back if they spotted any, again, none reported. After lunch,  around 6 of  us ventured on past the usual snow patch and looked over to the lake. Beautiful views galore, almost 360 deg. around. Mount Baker was bathed in sunshine affording us nothing but photo opportunities and turning around, well, there is Shuksan in all its glory. Total hike for most was 8 miles round trip and about 1850 elevation gain.

There was a never ending stream of hikers, all age groups, back packers and  even three and four year olds with (note this) their own back packs. One family, four generations with grandma now 90 heading up the slopes. Wow!!

Artist Point parking lot was over flowing even at the lower parking lot and still cars were scattered along the highway. Same for Lake Ann, cars before and past that lot.

Back at the camp site just in time for happy hour. 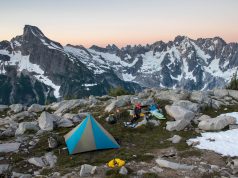