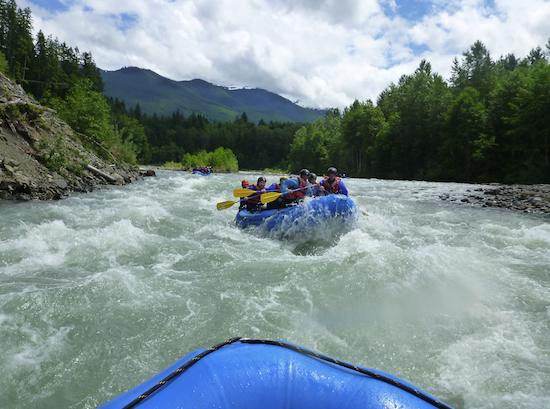 A whitewater rafting trip, aside from its obvious thrill, is a chance to immerse yourself in a wild environment.

Our publishers Pat Grubb and Louise Mugar treated our office to a day of whitewater rafting on the Nooksack River with Wild and Scenic River Tours in late June. It was my first whitewater trip, and an adventure I’ll never forget.

The Mount Baker Highway is a scenic route, familiar to many who have driven to Mt. Baker or Artist Point. Glimpses of snowcapped mountains and whitewater sections of the Nooksack River, seen through thick stands of old growth forest, stir the imagination. Cascading brooks descending from the ever-steepening valley walls contribute to the feeling that you are entering a realm of wild nature.

In a car, you are a passive observer, and can only feel so connected to the surrounding environment. As we drove towards Glacier, I was excited to get on the river and see the Mt. Baker foothills from a new perspective.

The day began at the Wake ‘n Bakery in Glacier, where we ate a tasty breakfast. We 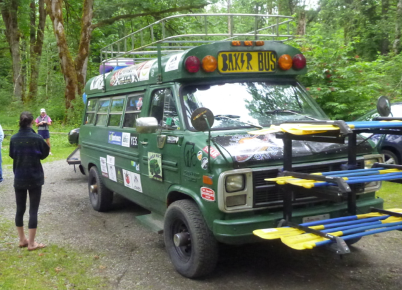 gathered at the Wild and Scenic headquarters around the corner where we met our guides and donned wetsuits before hopping in the trusty green Baker Bus – it started on the second try – for a barrel run to the launch site.

The river raged ominously in the background as our hostess, Sarah, explained rafting technique. We learned to follow the commands our guides would be giving us: all forward, all back, left back, right back and high side. Then we carried our rafts down to the swift water, positioned ourselves for launch and jumped in.

Our guide, a petite 21-year-old named Heather, was surprisingly capable. She called out commands with authority, although it was sometimes tough to hear her over the rushing water. We quickly learned to synchronize our paddle strokes, and it’s amazing how nimble a bulky raft carrying seven people can be.

Heather deftly set us up to hit each rapid. Sometimes we came in sideways before swinging around to take it head on. Waves of ice-cold water crashed over the raft from all sides, a welcome refresher, as the wetsuits and our paddling effort kept us warm.

Suddenly, we hit an upswell of water sideways and the current forced the raft to tilt wildly. “High side!” Heather yelled. I was on the high side already, but my feet slipped as everyone on the other side of the raft leapt over to my side to prevent the raft from tipping, and in a split second the raft dislodged and we were sent safely down the river.

We pulled up next to the other raft in a calm spot below one of the bigger rapids. Paul 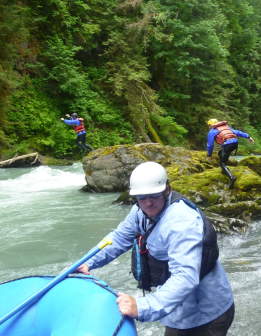 Engle, owner of Wild and Scenic, pointed to a rock above a pool and asked if anyone wanted to jump in. Steve Guntli, our newspaper editor, went for it and I followed suit. Full immersion in the glacier-fed river was shocking and exhilarating, and we had to swim like mad to get out of the current and back to the rafts.

As we made our way down the river, the rapids eased and the calm sections lengthened out. We pulled up to a beach and our guides showed us a section of bank with a few fossils. We could clearly see the outlines of ferns and ancient plants embedded in the stones.

As we approached the lower section, I found myself mesmerized by the silty grey waves making headway towards the sea, with a grin plastered on my face. I looked around, and my raftmates shared the same goofy grin. It was a warm, mostly sunny day but the air on the river was cool and fresh. We could see the white peaks behind us that held the glaciers that feed the river that was carrying us westwards. 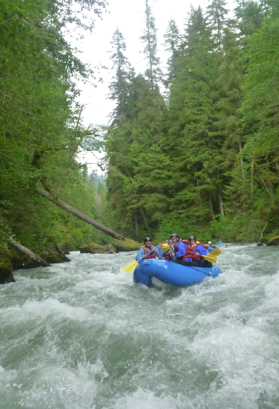 To really experience the wilderness, you have to go off the main track. When floating a river, especially one as wild as the Nooksack, you leave all the infrastructure of civilization behind and it feels remote, even though the highway might be just beyond the trees.

For me, that was the best part of our rafting trip with Wild and Scenic River Tours. Instead of driving by the occasional view of the mighty river and imagining what it would be like to flow from the mountains to the sea, we were on the river, immersed in it and moving with it for miles.

The hours flew by as we navigated class III rapids alternating with calm sections during which we could catch our breath, joke around and take in the incredible scenery. Too soon, we arrived at the takeout. Half a day had passed. The guides loaded the rafts and we got back in the well-loved Baker Bus.

Later, we ate an incredible dinner of Brazilian food at Maple Falls Café, joking and playing foosball with the owner, Sam Hassan. It started to rain as we drove west after our meal. As always, I was reluctant to leave the mountain towns. 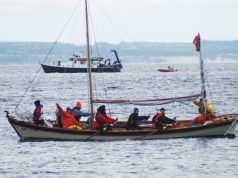